I’ve been waiting for this, like I always do.  The evolution of Bruce Willis is most easily categorized with the Die Hard films.  When he first hit the big screen as John McClane, he was more of a punk than anything.  Skinny, mouthy and not much more than the swagger of a young man,  he wore the role of McClane as a man somewhat surprised that the shoe of tough guy fit.  Two years later, they almost killed the franchise with a ridiculous, yet wildly successful sequel.  It took 5 more years to get the original director back.  The result, was the best of the films, Die Hard with a Vengeance.  For some reason, it took 22 years to come up with Live Free or Die Hard.

Now we are on the verge of the fifth film, with the prospects of a 6th on the horizon.  A Good Day to Die Hard takes the opportunity to introduce us to John’s son, Jack, played by Jai Courtney.  From early indications, it should be a more successful pairing than that of Indiana Jones and his son.  If the 5th and 6th films have anywhere close to the support that the rest of the series has, we could see the series advance beyond Willis.  While I am not sure how I feel about this, I am damn sure I can’t wait for A Good Day to Die Hard. 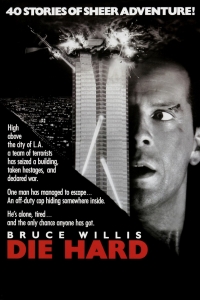 Review: This, along with Lethal Weapon 2, is the measuring stick for all action movies released since.  Everything about this film looks great and feels better.  So many iconic scenes, lines and sequences.  The best hero (Willis), the best henchmen (Godunov), the best villain (do I have to say his name?) in movie history.  Anyone who likes action has this film at the top of their list.  An absolute classic.

Several of the elements of this film could have been moronic and tacky, such as Gleason’s need for “more FBI guys” and Atherton’s idiotic approach at getting the story.  McTiernan’s hard-edged approach allows a guy like Veljo’s Sgt. Al Powell grabbing a bunch of ‘Twinkies for his pregnant wife’ in one scene to develop into the hero one of the 3 climactic moments.  Yeah, I said 3.  Each scene is a winner, to0.

The Good:  Let’s give a top 5, since damn near everything is great in this film:

The Bad: The only thing that could be construed as bad is that the characters of Robinson and Thornburg were approximated in lesser films (including Die Harder, by the entire police force and Thornburg himself)

The Ugly: This really isn’t fair, and it’s really more of a testament to the clarity of Blu Ray that I can tell many of the stunts were not performed by Willis.  The hair is different, and in one case the nose.  It’s really a stretch, because I could not tell these things until I had seen it about 35 times. 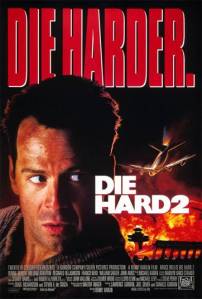 Review: This is the one movie in the series that has not aged well in the slightest.  Thanks mainly to some unbelievably antagonistic airport police led by the laborious performance of Dennis Franz, the film clunks along between action scenes.  There are some good performances, such as Fred Dalton Thompson, John Amos, William Sadler and the underrated Art Evans as Leslie Barnes, director of communications for Dulles Airport.  William Sadler gets his moment in the sun, and he is okay, but really anyone would be a comedown from Rickman.

An incredible amount of damage is done by having such an inept force protecting the airport closest to the White House.  Thing is, a hero like McClane has no need for such a foe in his efforts to combat the forces of evil.  Having such yahoos along for the ride prevents the bad guys from looking good, too.

Harlin’s direction ramps up the cheese factor.  The bad guy troops come out of their hotel in perfect unison and as they travel down the hallway, you realize that the corridor is getting smokier with each step.  Why?  Because he is Renny Harlin.

Even so, the film is still very watchable.

The Bad: The eject-seat.  Truly bad.

The Ugly: All the references to Dennis Franz, his brother and even Willard Scott for their weight.  Watching this movie helped me to understand that fat people are generally foolish and incompetent.  That’s good to know.

Review: McTiernan makes an excellent return in what is my favorite film of the series, even if it’s not the best film of the series.  The reason it’s my favorite is due to Samuel L. Jackson in one of his best performances as “Hey” Zeus.  He adds an equal element of grit to that of Willis’ McClane, wh0 has never seemed so grimy.  Their counter punches are as good as anything else in the series.

The premise turns the original movie inside out.  Instead of a skyscraper in L.A. we have the vast expanse of New York City.  It’s fascinating how the large number of citizens creates such a sense of confinement.  Making things even better is the New York City police department as portrayed by Greene, Camp and Bryggman.  Showing compassion, kindness and an actual competence in crime fighting, it’s a refreshing change of pace from earlier efforts and especially from the idiots in Die Hard 2.

As Simon, Jeremy Irons is okay, but not nearly as effective as his “brother,” Hans (Rickman).  Part of this is just that imitation can rarely exceed the original.  The other is I am just not a fan of Irons.  He delivers the lines, he has an accent.  He’s been in too many films.  Really, I think it’s just me.

The Bad: The ending.  Shoot down the helicopter?  Underwhelming.  And why would Simon and his hit girl bother killing the #2 guy?  He still has about 30 0ther guys he has to share the loot with.  Why was Sam Phillips in the movie?

The Ugly: How the hell they get on the boat.  It chops the machine gun guy in half, but not the two holding the cable?  Oh, and the way they survived that boat exploding was as preposterous as the eject seat in the second film. 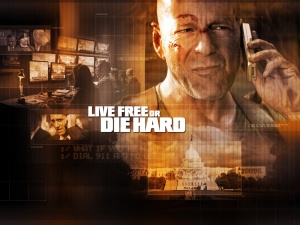 Review: Incredibly solid, despite the ten-year gap between films.  Excellent supporting cast starts with bad guy Timothy Olyphant, who puts more into it than anyone since Rickman’s Hans.  Justin Long is the perfect antidote for Willis’ muscled up old guy, and Winstead is an excellent Lucy.  Maggie Q is the most lethal henchman since Godunov.

The story is far-fetched, but intriguing.  The idea that one could shut down the world through the net has never been done so well.  The other cops are well-meaning, but more useless than the crew from …Vengeance.  It’s more plausible this time because the plot is executed effectively.

The major drawback artistically is the decision to go PG-13.  Everything feels edited, and it takes away from the feel of McClane’s attitude.  The decision helped financially, though, as the movie is the most successful of the franchise.

The Ugly: A semi-truck going up a circular ramp attempting to out maneuver a Harrier jet?  Next thing you will tell me the truck was accelerating up the hill… 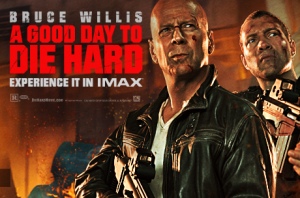 Review: This is the kind of movie you make when the previous film was an unexpected bonanza of a success.  The money demanded another one, and really, they did it too fast.  Even when the wait is seven long years.  That’s what it has to be.  How else do you explain the by the numbers routine of explosions and gunfire in which no one is surprised, even from the first boom?  It’s Russia, I know, and we are really supposed to think it’s funny when John McClane punches someone before stealing his car and screams “Do you think I understand a word you’re saying?”  On a human, level, though, it just doesn’t resonate.  I am pretty sure I can imagine what the guy is saying.

John McClane and his son, John McClane, Jr. go through the motions of two tough guys, bitching about the position they find themselves in while they desperately attempt to keep themselves in those positions.  Why?  Because, according to Jr., ‘there are nukes and stuff’ on the line.  Really, at Chernobyl?  Where do you think the end of the film will take place?

John Moore hasn’t directed a movie since the abysmal Max Payne in 2008.  Here he provides ample evidence why this is so.  He has one mode: blow stuff up.  There is something wrong when expository dialogue seems forced and out of place.  It’s really hard to tell if Skip Woods’ script would have worked any better in the hands of a real director.  The words here provide no chemistry whatsoever between both sets of parents and their siblings.  For the first time ever in a Die Hard film, there is not one memorable line of dialogue.

The best thing this movie can do is provide a placeholder for the sixth and – most say – final film.  My God, I hope Willis is smart enough to demand that real talent be involved this time.

One thought on “CoolPapaE Reviews The Die Hard Series”