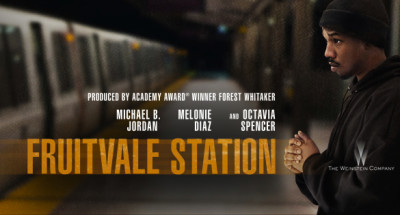 If the point of the movie is to show the value of a human life in the time frame of the last day, they had me at the moment Oscar Grant III (Jordan) first hugged his daughter.  It’s the kind of tale in which no one can win and the message of the story can’t be lost.  At the next moment, we see him showing up to work on his “day off” helping a customer figure out how to fish fry.  While having the customer talk to his grandma, he goes to his boss, promising to work 40 hours for 20 hours pay if the man would hire him back. He threatens that he’ll have to go sell drugs if his old boss doesn’t relent, but it doesn’t work.  A few hours later, he’s throwing the drugs out.  He’s truly a man who is conflicted.

Fruitvale Station is a story at least as old as LBJ’s Great Society.  The repetitive cycle of the downward spiral presented by life in the inner city is all-encompassing. Men who try to find their way are stifled by their history, their desires and prejudice.  One has to walk a fine line and then some to avoid the pitfalls.  Then they get hit by the trap door.

The courage with which Jordan plays  Grant is impressive.  His protagonist is conflicted, wanting to do what is right and what is fun, but also inhibited by his past bad decisions and present limits of perspective.  He is apt to try to work things like a con, but he is just as apt to attempt to do the right thing.  Even with all of this taken into account, there is nothing that Oscar does in this film that warrants being cuffed, much less being shot.

As his mother, Wanda Johnson, Spencer shows the simple power that won her an Oscar.  The most woe-begotten figure in the tragedy is always the mother.  She plays the part with such a persevering grace, it is heartbreaking.  The mother of his child is played in an equally powerful, as the crescendo of her last screen moments in the shower with her daughter rival anything else in the film.

The confrontation is played faithfully.  The officer is obviously of the mind that he is using his tazer, but then that kind of mistake is worth more than 11 months of his own life.  One can be sure his conscience will help pay the butcher’s bill.  This is the problem with untimely death.  There is no amount of suffering that can act as recompense.

Fruitvale Station is a powerful, but ultimately a thankless effort.  There is no possible silver lining after you see what happens in the first few minutes.  One wishes that there could be something beyond the events that conspired to rob the world of one of its lights.  But then, the conclusion of the first story consists of being kicked out of Eden, the bright side of the road can only happen when you cross the river Jordan.