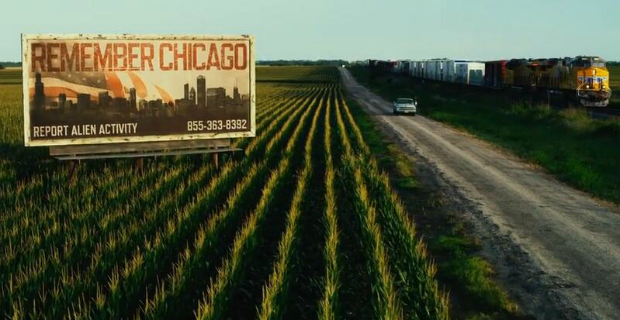 Alright, let’s get this thing over with.  It’s bad, yes.  There are the customary Michael Bay touches here.  The slightly unhinged brilliant guy (Tucci), the slightly unhinged hippie buddy (Miller), there is an everyman (Wahlberg) and his hot, barely pubescent daughter (Peltz).  There is a stud foreigner (Reynor) who is after her body, but only in the “good guy” way.  There is a guvment big wig (Grammer) who is keeping his agenda secret from the kind wonderful president who would never go after the kindly autobots.  Oh, and he has a henchman (Welliver) who is really slumming it based on what he is really capable of (LOST and Deadwood).  We haven’t even gotten to the Transformers, yet.

This is because the Robots in disguise have less personality than normal.  Optimus has added vengeance to his vanilla repertoire.  He is very angry early on, because the Autobots, like their nemeses The Decepticons, are being sought by the guvment.   The man (Grammer) leading the round up has, quite strangely, struck up a deal with another Transformer, intergalactic bounty hunter Lockdown (Mark Ryan) to pick up all extra robots and do varying things with them. Some will become hostages, some will become experiments and some will become whatever else Bay needs at the time in the story.

We do get John Goodman Autobot.  He seems like he might have a personality, being large and violent.  Kind of like Sully meets Walter Sobchak  Then there is the Samurai Warrior (Watanabe).  Then there is Bumblebee.  Oh, and then the Dinobots.  They, don’t talk much, but this is alright.  The original cartoon was low on personality and Bay is even lower with dialogue.  Gotta save money where you can.

So there is action that looks pretty good, even if it is hyperkinetic and not based on any sort of logic.  Filmmaking like this is a series of  “wouldn’t it look cool” moments in which the screenplay is shaped around the scenes.  Any resemblance to a coherent story is as coincidental as the roomful of monkey’s replicating Shakespeare. The other thing driving many blockbuster stories these days is the custom scene taking place in another big demographic.  In this case, as well as Iron Man 3, we have China.  The former film just made an extra scene for the film which it later excised from the U.S. version of the film.  Michael Bay did that one better, but having the Autobots hijack part of the bounty hunter ship and flying it to China with Dinobots in tow.  Having the last battle of the film take place in Beijing works in many ways. For Joe six-pack in middle America, its nice to see some other country’s cities being destroyed for once.  The Asian marketplace is nothing to mock.  This movie will likely be the biggest one of the summer.

Bay does not think his lack of logic or interesting characters is a flaw. When in the midst of another action scene, one character (Myles) all of a sudden needs to tell the strange and stupidly valiant Tucci that she is proud of him, no one in the world even has an inkling of why this should matter.  Sure, he is his assistant.  Sure, she had been disappointed in him.  There was no call for this fact to change at any point in the film. It makes no sense to resolve this right in the middle of an action scene, but that doesn’t matter to Bay.  He loves this scene as much as any explosion, it’s safe to say.

There have been many cities destroyed in the midst of this series.  This one asks us to remember Chicago.  Okay, how about the Pyramids?  Maybe the Hoover dam?  Maybe the many military bases and ships destroyed, or even that unnamed town in the first movie? We don’t remember them, and why should we?  What I remember about the Transformers movies is stuff gets blown up.  Yay.

Wahlberg is not effective here, unless you count that he is NOT LaBeouf.  That seems to help a lot these days.  Tucci is weird as Tuturro was, and Miller only brings smiles upon his exit stage left.  Peltz is not the victim of leering that critics would have you believe.  She caught a break when she caught Bay’s eye and now she has the option to be seen by more eyes than any other film this year.  Grammer could be in every movie and it would not move me.  Overall, I am thankful for the cast turnover.  It makes the rest of the movie seem a bit different.

Red Letter Media recently released a video in which its staff watched the first three Transformers films simultaneously.  The result was astonishing in the way that – almost scene for scene – Bay made the same loud mess of a film three straight times.  It is brilliant in much the same way that a C-student decides that the best way to improve the same stale paper he keeps writing is by adding special effects to accentuate its flaws.  Not to hide the flaws, per se.  But to bring the party to the flaws, and loosen up around them.  The effect is not good film making, but it sure is effective, by God.