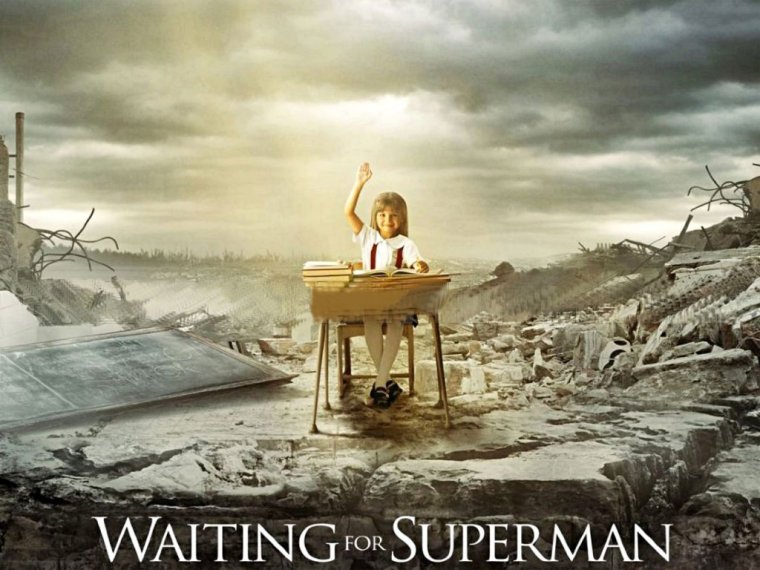 Starring The future of this country

Money as the problem is dismissed early on in Waiting for “Superman.”  Rather, Davis Guggenheim demonstrates that there is a legion of horrible teachers that, thanks to a strong union, have an immunity to correction, or even firing for any behavior.    After starting the documentary with the startling admission that despite his history of directing a documentary about 5 teachers in a public school, called The First Year (2001), he and wife Elisabeth Shue had chosen to send their kids to a private school.

The National Teacher’s Union has turned teaching from a privilege into an intractable right, according to Michelle Rhee, Superintendent of Schools in Washington D.C..  Absent the ability to even motivate the teachers with the possibility of more money to give up their tenure, what you have is trying to keep the good teachers with modest pay, while protecting the lowest common denominator.  Then the union’s consistent position is that the problem is that their teachers aren’t paid enough.

This has resulted in a series of attempts around the country to create Charter Schools.  So many people want to get their kids into these concentrated centers of learning, there is a need to hold lotteries just for the privilege.  To those who win, a chance at a better education.  To those who do not, they get to go back to failing public schools.

The problems are not limited to inner city schools anymore.  Plenty of schools in the suburbs are using tracking systems that have not been effective since the 1970’s.  To the few kids who excel at the right moment, they are passed on to better teachers, in programs which are better suited to learning.  The kids who are placed on different tracks suffer more busy work with less favorable results.

From a personal stand point, I experienced this in my Jr. High days.  I had been placed in standard 7th Grade English by a teacher who had little regard for me or my family.  To back him, I had just slightly above average test scores in English.  I spent the subsequent 3 years watching my fellow students who were allowed to go to the “Honors” courses study things in a free thinking environment, challenged and encouraged.  I, however, was relegated to a fruitless and monotonous series of worksheets, having little to do with actually reading and comprehending books.  I took it upon myself to do the best I could to read in my free time, while maintaining better grades in English language classes which seemed more like math classes.  When it came time to test for honors in 9th Grade, I finally got in.  It changed my life in an educational and emotional way.  The classes were smaller, the teachers were more engaged.  They expected more out of me, and I delivered.  I knew from sisters who had preceded me what was possible.  There are other kids I went to school with that did not have that advantage.  Until Facebook, I had not seen those folks in years.  For many of them, life has been a big challenge.

This is not to say with certitude that the film makers have the right idea in their approach.  There are, as with so many documentaries, detractors to the main contention behind the film, saying that the makers of the film are essentially marketing private schools, and that the “public” charter schools featured in the film are propped up with millions of private donations.

The truth is, good teachers need more money, bad employees always need to be encouraged to find other lines of work and there need to be more control for parents to decide where their slice of the educational pie is going to be placed.  Between those truths and the reality we face are unions, the number of immigrants, legal or not, and people that want to take good money and throw it after bad, and then advertise it for their re-election bids.  There have been many “education” Presidents in my lifetime, but the quality of the President seems to match the worsening of the quality of the education.