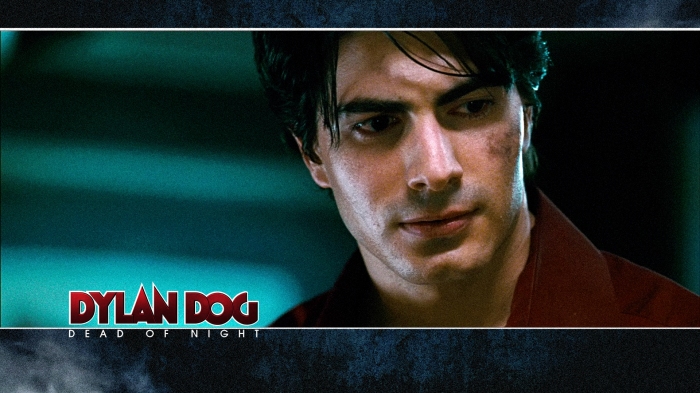 “There was only one way to get into Corpus House, if you weren’t a vampire,” intones Routh, in a voice over as Dylan Dog, paranormal investigator, about one long hour into …Dead of Night, “And that was as a ghoul, addicted to their blood.  Luckily I knew the game.  All I needed was proof.”

Minutes later, the same voice over gives us, “See?  That’s just what this case needed.  A seven foot tall, flesh eating zombie.  Which begs the question: are there any people left in New Orleans?”

Almost directly after, we get his voice, forcing a smile as it says, “It’s a shame that Slake turned out to be a dead-end.  Literally.  Fortunately, his driver’s license lead me straight to his crummy apartment.”

Finally, when talking to the erstwhile Jimmy Olsen, now playing Marcus, his newly made zombie friend, we get the most poignant line of all:

“You are dead.  Now you can pity yourself and die a slow, miserable death.  Or you can define yourself as you want to.”

This is life (or death) after Superman.  Literally.

What can be said about Brandon Routh’s Superman Returns?  It was a near masterpiece, which introduced the world at large to Brandon Routh.  It was his big ticket to the Christopher Reeve express train to stardom.  Well, aside from his own 4 Superman movies, Reeve’s star never really ascended past Somewhere in Time.  That was alright, though.  He turned down a bevy of film roles (including Lethal Weapon, Pretty Woman and Romancing the Stone), that would have remade him several times over.  He was his own man who had a lot going for him besides a quest for stardom.

What can be said about Routh’s Dylan Dog: Dead of Night?  Not nearly a masterpiece.  Quite a piece of crap, for the most part.  But, it has its moments, mostly provided by Huntington’s Marcus, waking up to the fact that his life as a mortal is history.

The voice over is a tough medium.  Much like writing an email, it is very hard for the average person to correctly express themselves when talking over the action of a movie.  Some of our best voice over artists, like Morgan Freeman, make it look easy.  Brandon Routh has talents, to be sure.  Talking over the movie is not one of them.

One of the many problems for Dylan Dogg, it seems, is the comic book (based in Italy) is legendary, both for its humor and the high quality of the story.  They poured $20 million into making this film.  I am not sure how much they paid for the script, but I am guessing it was a little much. Several of the lines fall flat as they deserve to, while others lose their power to an ineffective voice over.

The effects, while not great, do nothing to distract or distinguish the film.  The zombies, werewolves and vampires of the film are all pretty low key, while the last nemesis, Belial, looks like something out of Tom Cruise’s Legend.  A world where the undead hold as much credence as the dead, one would think that the characters would be a little more interesting to look at, much more listen to.

The pacing of this film is an absolute wreck.  One moment they are in a mad car chase with a vampire.  The next moment, with the vampire literally vanquished on a street sign, they walk calmly down the street, past him, moving the story forward with boring exposition.  There are somber, boring speeches, by usually good actors, like Storemare, immediately followed up with a fight, to no particular reason or effect by one of his minions (Angle) on the way out the door.  Routh does the best he can with this material.  He approaches each dis-joined scene with no concept of how it will be screwed up in editing.

Routh was good in his first significant post Superman role, as Todd Ingram in the wonderful Scott Pilgrim vs. The World, but that did not bring an onslaught of major offers, either.  Most of his activity since he donned the cape has been in movies that get shelved (Tom Clancy’s Without Remorse), roles that get cut (The Informers), decent direct to video fare (Sam Jackson’s intense Unthinkable) or rumors in significant projects (The Walking Dead) that never materialize into reality.  He has been on TV (Chuck), but it’s only a supporting role.

Mainly, though, Routh waited around for the inevitable sequel to the decently successful but not Dark Knight level success of Superman Returns.  As properties transferred, rights expired and people involved with his version of Superman departed, the odds grew longer that Routh was ever going to be Clark Kent again.  Finally, once Zack Snider decided in November of 2010 that Henry Cavill would play the role, all hopes had pretty much dried up into dust.  So now, Routh goes the way of Eric Bana, Edward Norton, even Tobey McGuire.  Because of Christopher Nolan’s twin (soon to be a trio of) masterpieces, reboots are the rage.  While there was plenty of reason to give the old Batman series a kick in the junk, these other re-fresheners are not guaranteed successes built on dead franchise carcasses.  There was plenty of life left in the cars now out on the lot, with the rest of the clunkers.

So, like so many capable workers, Routh got a layoff.  He got experience, with the faint stain of failure, which, quite unfairly, seems to follow him around.  The result is movies like this, which don’t do much for his reputation, but feel like a risk without much chance of reward.  For that reason, I will continue to follow him, like I do, Bana, Norton and others.  I’ve not been a superhero, but I have been laid off.