Skip to content
It’s Hobo with a Shotgun, not Bill Shakespeare
0.5 Stars

It’s Hobo with a Shotgun, not Bill Shakespeare

Hobo with a Shotgun – 2011 Directed by Jason Eisner Starring Rutger Hauer, Molly Dunsworth and a bunch of local “talent” Wirtten by John Davies Prostitute: “You can’t solve all […] 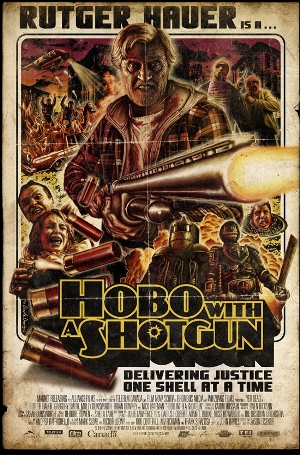 Prostitute: “You can’t solve all the world’s problems with a shotgun.”

The second film to generate from the Tarantino / Rodriguez Grindhouse films commercials, Hobo with a Shotgun has little more than that to recommend it.  Given the number of horrible lines, unimaginative props and hammy acting talent, it doesn’t qualify as a movie, more an extended trailer based on some fantasies involving Hobos and gore.  Somewhere in there is Rutger Hauer.  An actor who has been in good to great films with directors such as Ridley Scott, Christopher Nolan, Richard Donner, Phillip Noyce, George Clooney, as well as the afore-mentioned Tarantino and Rodriguez, Hauer did not need to be in this film.   I am pretty sure he isn’t hard up for cash.

There will always be an audience for this stuff, and there, really isn’t anything all that wrong with it.  But when you compare higher end stuff like Machete, you have to compare it.  This movie is the kind of film that a first time writer and director makes and sends to a more established filmmaker, to get a bigger budget and, potentially remake it.  Rodriguez did this with El Mariachi, eventually getting Desperado out of it.  But when you get Rutger Hauer to star in it, you have to release it, right?

There is very little to highlight in this movie.  I’d say the best part is the guy who films Bumfights getting his comeuppance.  Dunsworth, as the prostitute, might have some promise as an actress.  Brian Downey, as “The Drake” and Gregory Smith, as “Slick,” deserve to have their S.A.G. cards revoked, if they indeed have them.  Everyone else in the film is quite obviously someone who knows one of the filmmakers.

Hobo with a Shotgun could have been something decent, to be sure.  It feels more like a rough draft than an actual film, though.  The kinds of folks that like Grindhouse should be disappointed with that.