Skip to content
The Rum Diary: Notes on a life full of exits
2 Stars

The Rum Diary: Notes on a life full of exits 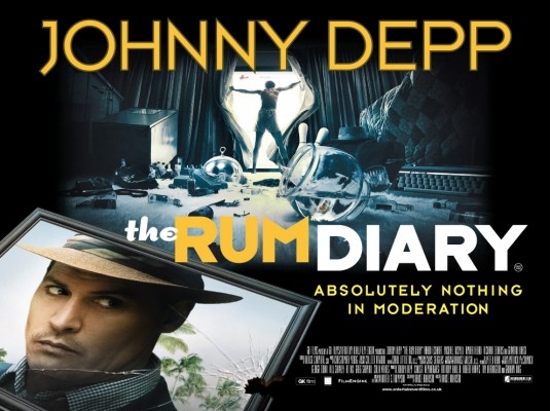 I had always wondered whether I should read any of Hunter S. Thompson’s stuff.  I had a quirky friend who had read him in High School and, before he went off the deep end, I found him to be rather funny.  ‘Round about 2005 when he decided he wasn’t going to live with the consequences of his bad lifestyle choices, I decided that reading his works was no longer necessary.  There is a line early on when Hunter’s alter-ego, Paul Kemp, gives advice to a man of recent acquaintance who is tired of his job:

This is a clever line, to the makers of The Rum Diary.  They apparently think nothing of his decision to leave his loved ones in the lurch at the end.  To Johnny Depp and Bruce Robinson, Thompson is still a wacked-out folk hero rebel.  From Depp, this is not a surprise, as he already made the another Thompson movie, Fear and Loathing in Las Vegas, which bombed in 1999.  As for Robinson, I am still not sure he’s made a movie that has turned a profit, and I am utterly surprised that he got $40 million from someone to make this film.  It barely made half of its money back.  So at least this is consistent with Hunter’s other works made into movies.

The story is typical Thompson: booze, a new job, weird new friends, drugs and bastards.  The bastards, as in every case, are those who by nature or choice are in opposition to Thompson.  He has some sense of right and wrong, mixed with the drugs it is often hard to distinguish if it is real or by accident.  The natives are his purpose du jour.  He gets offers from the bastards (Eckhart in better clothes than everyone else) to help them make money.  Meanwhile he hangs out with his new, lowly, newspaper writing and drug addicted friends, getting in trouble with the locals while feeling a pious pity for them.

As for the friends, Ribisi is wasted simply by playing every other lowlife he’s portrayed in his career.  Rispoli actually does a credible job as Bob Sala, who is the resident true heart sad sack.  He is so believable, he almost makes the movie worth watching.  But not quite.

Depp is amusing, off and on, but we’ve seen this crap before, done better in other movies that take place in the Caribbean.  We get it, Depp.  In the immortal words of Marc Hochman, “We gotcha.”  We’re all impressed that you can play someone in an altered state.  Now try playing sober.