The Host is a monotone response to sameness 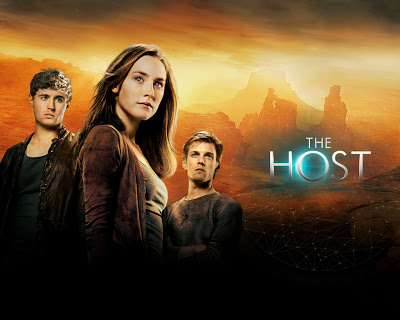 An invasion force of leech-type souls has taken over the world, and in the process they have extinguished most of the human race.  These leeches are kind and trusting of one another.  For some reason, this does not allow them to stay living on one planet, so here they come to our planet of love, war and other aspects of our unreasonable species and slip right in.  The film starts with Melanie Stryder (R0nan) getting cornered in some generic building.  How she was so completely surrounded by all these infested folks is about as pointless as wondering how the world was taken over without mass amounts of the world being destroyed by resistance.  It’s not like those infested are not recognizable with their silver-blue luminescent eyes.  It’s pointless to wonder this though, since the story takes us to other, more mundane places.

After she tries to end her own life, Melanie is brought back to health and eventually invested by a soul leech called Wanderer.  The leech and the person inside find a way to co-exist and carry on an a silly, panting back and forth as they try to figure out who’s in control.  The Seeker (Kruger) who is the leader of the local chapter of the parasites, decides to switch out Wanderer and put herself in Melanie.  Of course she explains this to Melanie and promptly leaves Melanie in her apartment with a guard outside the door.  10 points to anyone who can guess whether Melanie / Wanderer escape and find Uncle Jeb (Hurt) and the rest of humanity in a volcano which is “not quite extinct.”  Yes, Uncle Jeb.  Jebediah to Melanie’s Aunt, Maggie (Fisher).

So, as Uncle Jeb defends Melanie / Wanderer from the rest of the humans who want her dead, he gives his infested host a tour of their underground wheat field and generally shares every secret that could render them helpless to the forces of The Seeker.  Then he gives his shotgun over to Jamie, the little brother of Melanie, to keep watch over her.  The Seeker, meanwhile, is wandering the desert with her companions in cool silver cars, motorcycles and helicopters.  Will The Seeker’s forces ever find Uncle Jeb and his underground wheat field of resistance?  Another 10 points if you guess the answer.

Infestation.  Resistance.  Uncle Jeb.  The Seeker.  The Wanderer.  Shiny silver vehicles driven by nice, trusting bad guys.  Sounds like a recipe for excitement.  Not to mention slow drives through the desert in non-silver vehicles carrying the ill-gotten loot that they stole from under guarded grocery stores.  Good thing the silver helicopter is around to detect if a big truck is driving “faster than the limit” by about 2 mph.  Is it irony that one of the two guys that dies trying to flee is a BADF?  It’s a wonder that the other guy was not wearing a red Federation shirt.

The Host is a true melding of the soft-edge of Twilight creator Meyer and the muted futuristic world of creator of Gattica and In Time, Niccol.  Everything is clean, emotional and low-budget.  The motives of the characters of Melanie and The Wanderer are not all that consistent.  The world is taken over by these parasites, and Wanderer is shocked when the humans might kill a few.  She should talk to The Seeker, because she’s of the mind that sacrificing a few of her family is okay for the greater good.  My guess is that this may have been better explained in the book.  Given as much as the book was panned, perhaps this is not the case.

There is a lot of kissing.  It’s hard to tell which part of Melanie likes which guy, but then, it may be due to the fact that all the guys who are not Uncle Jeb look alike.  What is interesting about the story is not enough to override the bland nature of the way it is told.  Part of the problem is the casting.  There are not any engaging performances whatsoever.  Everything here is coffee commercial level.  The rest of the issues rest in the direction.  The lighting is soft, the rocks are soft, the lighting is soft.  I have never seen the planet that these filmmakers call earth.

One cannot assume this film would not appeal to any one, though.  I am sure there are people out there who like a really soft touch.  Maybe they don’t like swearing, blood, or litter.  Maybe they like a film where a group of people look at each other in the end and realize that there had just been a misunderstanding.  Welcome to the new age, indeed.