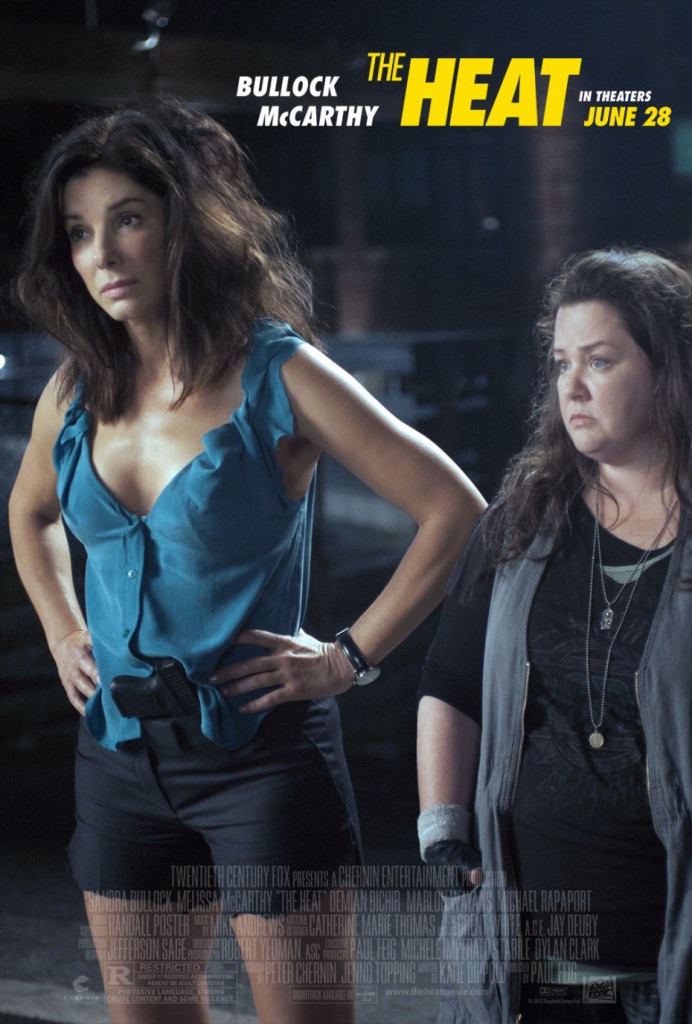 This is written by a woman.  I keep telling myself this, to no avail.  The number of curse words that emanate from the mouths of women, it feels like an Olympic achievement by the time we get to the Bulgarian blonde.  Talking about sex, drugs, more sex, more drugs and female body parts.  At least there is not a gratuitous amount of fat jokes.  That’s the benefit of a woman’s point of view.

“Who closes the door to take a sh__?” asks Detective Shannon Mullins (McCarthy) after kicking in the door.

When has that question ever been pondered?

A connect the dots crime caper featuring an unlikely duo (is there any other?), one FBI agent (Bullock) and the aforementioned incredibly foul-mouthed detective. Bullock’s Agent Ashburn is so tightly wound, she borrows the neighbor’s cat for affection.  She gives it back, though.

“You’ve gotta vent that furnace,” says Mullins to Ashburn as she tries to give her a makeover.

McCarthy is as close as I have seen to an unhinged since Ray Milland in The Lost Weekend.  She’s been various versions of this character in her other films, but she goes full tilt here.  For the most part, it’s enjoyable, even though half of the jokes are about of filth in which she lives.

The conventional aspect to this type of comedy is the straight-laced one is supposed to get closer to real life by learning how to let loose.  This alone would be torturous to watch.  Bullock and McCarthy make the combination work because both have the ability to move back and forth between self-loathing and intelligent responses to odd situations.

The story really clicks when we meet Mullins’ family.  Hearing her family pepper Ashburn with questions, including whether she was “…a woman from the get go…” in a Boston accent is funny everyday and twice on Sundays.  I love seeing Jane Curtin loosen up, as well.

McCarthy’s ability to show compassion is nearly matched by her gift for crudity.  It’s not just being crude that makes McCarthy funny, though.  She can pounce on any moment and make it personal.  I love what she does to the albino agent almost as much as I love the way she handled the guy with 5 kids looking to hook up with a prostitute.

There are so many good one liners in The Heat, I am amazed they came up with such a horrible title.  The folly of feeding the strays has never been so clear.  “Mint in the dumpster,” indeed.  It really is one of the funnier scripts in the last few years.  The good is pushed to nearly great on the sheer will of McCarthy.   I don’t think I will forget the tracheotomy scene, or the one after credits start to roll.  The combination works like magic, but let’s not ruin it with the sequel.

One thought on “The Heat: What happens when you put these two together”