Adams and Jefferson on Movies: The Exorcist and its true sequel, Legion (Part 2 – Extended Editions)

CoolPapaE: First off, watching both stories at least twice in the space of a week, I can almost smell cigarette smoke wafting everywhere in my imagination. I know it […]

First off, watching both stories at least twice in the space of a week, I can almost smell cigarette smoke wafting everywhere in my imagination. I know it was a different time, from 1990 and back, but seeing the different situations where cigarettes are presented became nauseating. Everyone had to just smell horrible. In part one, it’s funny seeing the priest Karras giving Chris (Burstyn) a cigarette. My priest as a kid in the 70’s, Father Donahoe, couldn’t wait to get out of service to light up. I never did see one of the other parishioners bum a cigarette off of him. 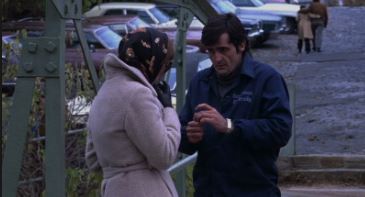 Later there is a scene where Karras and Dyer swap a single cigarette back and forth as Father Dyer attempts to console him upon the loss of Karras’ mother. And that takes place in a small room over a bottle of Chivas Regal.

Exorcist III‘s Dr. Temple (Wilson) never has a cigarette out of his hand, no matter where he is in the hospital. In fact there is one scene when he leans over an ash tray and uses one cigarette to light the next. In his case, the cigarette is part of the character. It’s clear that Dr. Temples rather large ego has been damaged with his connection to the Gemini killer, and we see his obsession as a sign that he is indeed worse off than his patients when it comes to psychosis.

The cigarette usage through every version of the film make me ever so thankful they passed laws to prevent smoking in public buildings.

Yes, the smoking was at times humorous, at other times repulsive.  I chuckled at the scene in the original film when Regan’s doctor comes out of the room where he has just administered one of those horrific, antediluvian tests, and has to stop and light a cigarette before he can share the results with Chris.  This poor woman is in anguish over her daughter’s condition, yet he can’t utter a single word until he gets that cancer stick crammed in his cake hole.  You are right that the constant chain-smoking was part of Dr. Temple’s character  in the sequel.  That unnatural, affected way that he always held the cigarette upright, almost level with his mouth, made me want to grab it from his hand and put it out in his eye.  Good God, that was annoying! 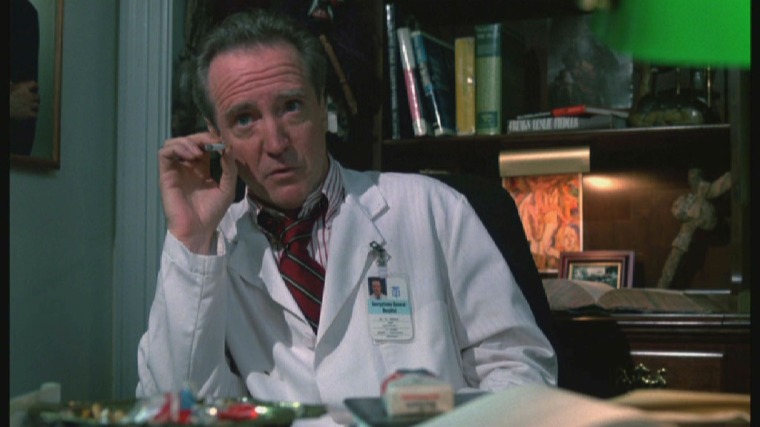 As far as the differences between the original and director’s cut.  In the case of the original film, I would say that the original theatrical release was already a nearly flawless film.   But the added scenes are nice.   In some cases, scenes that existed in the earlier version are just elongated.  The Iraq prologue with Father Merrin is fleshed out a bit more.  There is also an additional sequence with Regan being administered a medical test.  I like this scene because it adds to the progression of her condition, and reinforces the idea that the doctors were just following a diagnostic playbook, moving from test A to test B, and so on.   The so-called spider-walk scene, where Regan walks down the stairs in a position that seems to defy both anatomy and gravity, is definitely unsettling.

Perhaps the most interesting addition, and possible unnecessary one, is the conversation between Fathers Merrin and Karras on the stairs, after round one with the demon.  In the original film, they are just shown sitting in silence for a couple of seconds.  The extended version has Merrin offering his explanation for why the devil chose this girl, and what his intentions are.  Friedkin believed that the entire movie speaks this message.  Blatty, however, felt that the scene was integral to the story.   I do like the fact that when Merrin says the demon will make them doubt the existence of God, the camera is in close-up on Karras, who is experiencing those very doubts at that moment. But I tend to agree with Friedkin, that the priests sitting in silence is more powerful, and the message is not lost.   What do you think?

Spot on. We know through the film that this is Karras’ test, from the moment that we see him with his aging mother. And what else is there to test a priest with than on his faith?

It is nice to have the spider-walk scene back, sans the wires that they lacked the ability to remove back in the original release. I also enjoy the padding to the Iraq scenes with Merrin. There are more subtle additions, like the dimming of the lights of Chris’s arrival home being accompanied by demonic imagery are also welcome.

The descent into madness for Regan is kicked off in a more intriguing way with the doctor revealing her first burst of profanity at the coaxing of Chris. The scene is a clever way of introducing the beginnings of the trauma to come.

The most incredible aspect to the updated release is the remastering of the sound and the film. There is a clarity I have never before experienced with the film, given that I never watched it in the theater. It adds a whole new dimension to the fear and agony.

Contrast this with the The Legion cut of Exorcist III which is a rough cut, to say the least. Most of the film’s additions are in the form of off-center, VHS dailies that are intriguing as much for what is missing as they are for what is there. First of all, where is Jason Miller? The haunted face of Father Karras is one of the key components that ties together this film to its predecessor. It’s Karras’ body and wounded soul that is paraded in front of us, with Dourif’s Gemini killer taking the reigns from within. In all the combination was off-putting in the best way.

The original cut seems to replace Miller completely with Dourif, making him the corpse of Karras as well putting him in the pictures of the young priest on the wall in the restaurant with Kinderman and Dyer. This would have damaged my experience of the film, to be sure. As good as Dourif’s performance is, I am glad that change was made, for whatever the reason.

Other scenes as added make the story more complete, like the explanation about the discovery of Brother Fain in Karras’ original coffin. It’s kind of strange to consider that no one bothered looking in the coffin before placing it in the ground, but I digress.

The ending is a strange compromise, too. I very much appreciate the complete removal of Nicol Williamson’s strange Merrin facsimile Father Morning. It was a strange, tacked on scene that served the purpose of satisfying the movie studio. It is replaced with the straight up murder of Dourif’s Karras by Kinderman. A little melodramatic, to be sure.

I do wish that they could have wedged in the “I Believe” scene, and maybe it was there in Karras’ original vision somewhere.

Watching the so-called director’s cut of the sequel raised just as many questions as it answered.  In between the two versions, one could cull together the pieces of a pretty good film. But there is still something lacking.  You already touched on the absence of Jason Miller from the director’s cut.  If the film had been released that way, I would have been so confused.

I couldn’t agree more that the movie loses nothing with the elimination of Father Morning.  That character was so clearly created to remind viewers of Merrin in the first film.  And really, an exorcism is out-of-place here.  That is not the kind of confrontation that is going on here.   This is much more about Kinderman.   I suppose it would have been nice if Scott’s final speech could have been included in the director’s cut, but overall I prefer the more quiet, and sudden ending of the director’s cut to the bombastic original version, which again seemed an attempt in some ways to echo the original film.

So in the case of the original movie, we get an extended cut that doesn’t need to exist at all, but still doesn’t detract from the power of the movie.  In the case of the sequel, we get a director’s cut that absolutely needs to exist, and yet still leaves the viewer somewhat unfulfilled.