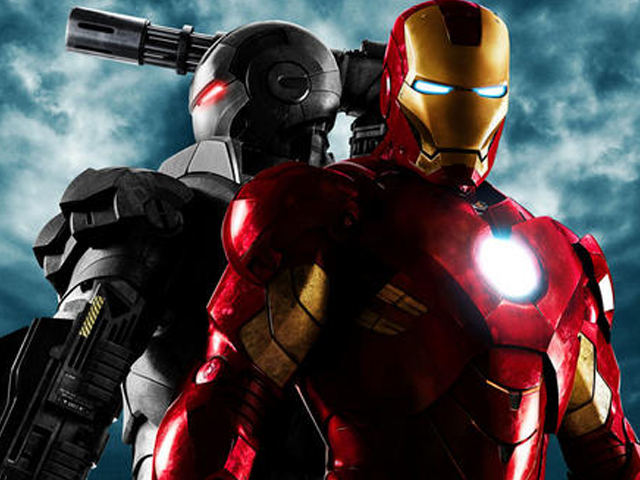 The thing that irritates me about reading reviews is when you see an unlikely critical darling of a summer blockbuster (Transformers, Iron Man) inevitably you find the second movie’s review almost entirely written off as a disaster before the movie is even seen for the first time.  Transformers: Revenge of the Fallen was not the turd it was purported to be (if you discount Megan Fox).  Iron Man 2, was better in almost every way over its predecessor.  What these second film reviews tell me is that the reviewer tends to think of their review as a form of benevolence.  In short: the Lord giveth a good review to your first film, the Lord taketh away a good review for your second film.  This is bull shit, and a cop out to actually grading the movie on its merits and its faults.

Iron Man 2 has faults.  Primary among them a useless combat scene between friends in metal suits, an abbreviated final fight and a convenient appearance by the main character’s deceased father used to move the movie forward from a stall in the third act.  The positives, however, far outweigh these minor quibbles.

Starting pretty much where we left off in the first movie, Tony Stark is now even more of a rock star, now that the world is aware of his double identity.  This newfound fame has a cost: the power core he designed to save his life and power the suit in the first film is slowly poisoning him.  So he drinks a bit and lives even more dangerously to compensate.

In front of him, Justin Hammer, a competitor with much in the way of means, little in the way of ingenuity, who is trying to get the government to force Stark to show his secrets.  In the shadows of his past, Ivan Vanko, son of his father’s contemporary, believing that the elder Stark cheated him out of his share of the fortune.  Both have plans for Iron Man that will push him to move past his own issues and look to something more than himself to face the new threats.

The best aspects of this film involve Tony wandering through his seemingly aimless existence.  His day-to-day wanderings are in exquisite contrast to Iron Man’s stoic countenance.  The fit is effectively brilliant.  If Iron Man was a dullard outside of his costume, like Batman’s Bruce Wayne, what would be the fun in that?  The best part of Downey’s portrayal, though, is even when others believe he is wasting his time, he is generally moving forward.  It is amazing how, two movies in, anyone would think that the guy who created the coolest one man army suit in the world would be meandering at any point.  It is a leap in logic, but it helps fill out script pages with dialogue for other characters.

recently promoted President of Stark Industries.  Gweneth has only a couple of things to do in the role: look concerned and look adorable.  The chemistry between Stark and Potts is interrupted somewhat by the obligatory fawning over Johanssen’s Black Widow.  Rumor has it that there was more of a romantic subplot between Black Widow and Stark that was (appropriately) nixed by negative responses during early testing.  What’s left feels choppy, but Paltrow is so engagingly beautiful, seeing her kiss anyone is almost worth the price of admission.

Johanssen is nonetheless effectively used in what really amounts to a showcase role.  Wearing tight suits and kicking a few guys assess is fun to watch, harmless, and adds little to the actual plot.  More effectively weaved into the story is Sam Rockwell’s Justin Hammer.  In a country where, no matter the administration, every loose contract seems to end up with Haliburton, it is quite believable that congress would be pushing one company to give up their secrets to another that would in turn give them a break.  Rockwell pushes the sleaze button effortlessly and in this one, manages to throw in some believable corporate cluelessness.

One of the best features of this chapter of the story is the way the S.H.I.E.L.D. project is integrated into the film.  Marvel has done some stupid things with their comic movie franchises, including replacing The Hulk not once, but twice, and giving Terence Howard the screw job over the character of Tony’s best friend, Rhodey.  One thing they have done right, however, is weaving the future Avengers project into the movies.  This helps build anticipation for the project, and, I suspect, will make the movies with historic value, if not drawing power, like Thor and Captain America, more worth watching than they would be originally.  Sam Jackson as Nick Fury adds maximum value to the franchise, and they were right to lock him down for several movies.  His parts in the film were the exposition that I enjoyed the most.

Howard did a good job in the original, and there was really no economic reason to make the change.  It did run through my mind how the role might have worked for Howard over the good work that Cheadle did.  While it would have worked either way, all things considered, they should have kept him.  Once the costume was on, however, War Machine was as awesome as I expected.  I always thought Iron Man worked better with more ammo, but the way Stark is presented as being more responsible post kidnapping, it works that the military would take the suit and make it more conventional.  There is a classic payoff with the big weapon in this one, and I do wish they would have shown War Machine as more necessarily a hero, but the movie is called Iron Man for a reason.  That said, I would love to see another franchise with Cheadle, or at least more of a presence in the sequel and The Avengers movie.  Throwing Don Cheadle into the mix actually improved the character, and made for a better fit in the War Machine suit.  Does it offset the lack of respect to the original actor and the fan’s wish for continuity?

As Vanko, or Whiplash, Mickey Rourke is appropriately menacing.  The scene in Monaco, forcefully serendipitous as it was, is among the best that I have seen in a superhero film.  The Iron Man suit is thrown around, but the effects are great as the suit actually seem to have weight.

It was a jolt to see such a great scene so early in the movie, and its effect ended up making the final fight seem second-rate.  Rourke had some effective interplay with both Downey, Jr. and Rockwell, with the former being a great example of a brilliant mind (Vanko) tolerating a not so brilliant one (Hammer) just because the other one has means.  Part of this is because Rourke often appears to be acting in a different movie than the rest of the cast, but seeing him march through Hammer’s inventory and use it for his own means was appealing.

Downey, Jr. has long been one of the most engaging performers on film.  The role of Tony Stark seems like it was made for him, and this movie allows for him to grow more comfortable in it.  Downey, Jr. would not work well with a secret identity, but he seems to thrive with the limelight seeking character that is Tony Stark.  His reliance on something that is actually killing him seems a natural extension of life experiences, as well as his ability to hide himself right out in the open.  I wish they would have the 3rd movie in the can before we see The Avengers, but as it stands, Iron Man is the centerpiece of the Marvel Universe, and with good reason.