The Writer – Brent Forrester Director – Joss Whedon A brief synopsis – Michael is a guest speaker at Ryan’s class in Business School.  Dwight finds a bat in the […] 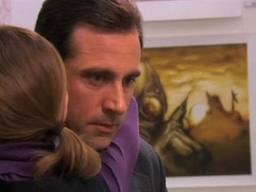 Another good episode nearly ruined by Michael unleashed on a crowd.  They should know by now that the shtick isn’t working and concentrate on toning it down or just making it better.  Like the scene where Michael truly inspires a Pam who is desperately in need of inspiration.  The scenes in the office, with the bat are just swell, especially Jim, Creed, Angela, Dwight and Meredith.