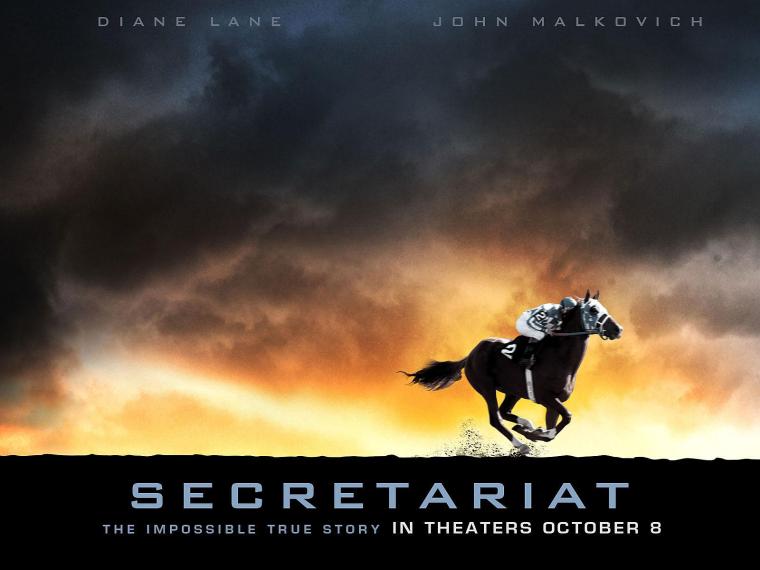 Mike Rich has made a living writing screenplays about true life sports competitors, from unlikely MLB starting pitcher Jim Morris, to unlikely football player Vince Papale, to unlikely gold medal winning U.S. Hockey team, to, well, you can guess the likelihood of Secretariat succeeding.  Interesting thing is, he takes angles not normally taken on these films.  It’s not every team winning the big game, although Secretariat and the Hockey team do that.  It’s that everyone has a chance, and hard work can crack open the door on that chance a little more.  That his films are family based is not an accident: that’s the main audience for this type of film.

Randall Wallace wrote for television under the wings of the great Stephen J. Cannell during the 80’s and 90’s.  He also wrote a collection of songs, including “Mansions of the Lord,” which was played as the closing hymn for Ronald Reagan’s funeral.  Add to that several novels, and you have truly a jack of all trades.  After hitting it big in 1995 with the Oscar nominated screenplay for Braveheart, he translated that success into a film career which includes directing films like The Man Behind The Iron Mask, We Were Soldiers and, unfortunately Pearl Harbor.  His work has been criticized by those who do not like conservatives or Christians to the extent that one might think he has done something to hurt someone, or at least, drenched his works with conservative or Christian values.  This was never more pronounced than with this film.  Left wing movie critic Andrew O’Heir wrote such a vicious diatribe in his review of Secretariat, that even fellow left-wing movie critic Roger Ebert (aka, “The Man”) was moved to write a “Come To Jesus” editorial informing critics like O’Heir that a horse could not believe in Christ.  Some of O’Heir’s criticisms were based primarily on the timing.  Lately there have been a series of films, starting with The Passion of the Christ, followed by The Chronicles of Narnia and, most recently The Blind Side, that have been bolstered in the box-office by groups of Christians organizing through their churches to watch.  Add to this that Wallace worked with Gibson on Braveheart and is a notable Christian himself, and one could make a distant connection.  But O’Heir wanted to make that connection glow in Tron-type lettering.

Now, to be frank, Disney has a tendency to “Disneyfy” all of their family movies.  From Cool Runnings, to Remember the Titans, to Glory Road,  and even to Rich’s own Invincible, there is a “sheen” that pervades each film in an air of a dream like trance.  It renders each film neutered to reality, and open to criticism for those who say it takes from the reality of the truth of these stories.

That facts are altered is an obvious truth.  Who, though, wants to go to the movies to see things be as miserable as life?  There are some, like Andrew O’Heir, but they are the minority.  If Disney were run by Andrew O’Heir, they would end up making the same movies, or O’Heir would be fired.  This tried and true formula will not be altered much in this country.  While I understand why O’Heir would take issue with this movie, and then back track and call it satire when questioned by Ebert, his writing is not so much a review as a disappointment with the way life is.

To the actual movie, I must say, this is one of the few times that the facts outweigh the omissions.  Having researched the story, I can’t find many outright fabrications.  How rare the movie, especially a Disney movie, that is more true events than “inspired” by them.  This in and of itself would make the movie worth watching.  What’s more, the narrative tone is so matter of fact and without added romantic gloss, the true intensity of the story comes through.

Starting off with a daughter Penny Chenery(Tweedy), finding out her mother has passed away, and her father subsequently has a stroke.  This puts Penny and her brother in an awkward position of trying to salvage their parent’s horse farm.  Discovering the person in control of their stock was intending to undersell, Penny steps in.  Before long, she has won a mare pregnant with the foal of their prized stallion.  She takes the foal and decides to hire a trainer, Lucien Laurin, and with his knowledge, along with that of that of handler Eddie Sweat, finds herself the owner of one of the best horses (not to mention Triple Crown Winner) in racing history.  Her passion is to complete her father’s dream.  This is as valid a goal as any child could have, boy or girl.

The who and the whys, the where and the whens are included here, for the most part.  The tensions that existed are downplayed if they did not exist within the narrative.

Diane Lane does a tremendous job portraying a politely driven housewife who takes her misfortune and turns it into an opportunity.  This decision has ramifications on their family, the farm, and the horse racing world in general.  She shows the measure of weight in her decisions with her voice, her carefully chosen words, and her respect for others and their opinions.  Lane’s Penny does not take their opinions at the price of her own impressive instincts, however.  Lane undercuts her own impressive looks with the modesty expected of a woman of her time.  That she is unwilling to grandstand or showboat in the way of, say, Sandra Bullock in her Oscar-winning portrayal in The Blind Side shows something of Lane’s confidence in her own ability.

In Lucien, Malkovich shows his least menacing portrayal since Places In The Heart.  The role is not terribly complex, but requires heart, and his is aptly and subtly demonstrated.  His flare up in an early loss is a bit of an oversell.  In truth, his character had managed both Secretariat and the winning horse, and it was Penny that was most displeased, instead of the one that did the calming.  This is easy to forgive, though, as it does not change the nature of either character.

Where Wallace and Rich succeed is with all the peripheral characters.  They are all integral to the success of the story. The lifelong Secretary, played by character actor Martindale.  She is the Secretary after whom the champion horse is named.  Her steadiness at the arm of Chenery is a reminder of the kind of support that helps to bring the best to light.  Martindale grabs some important scenery and makes the most of it.

Eddie Swift is portrayed with heart and charm by Ellis.  His role was under scrutiny for being a backwards portrayal of an African-American, but given the events happened in 1973, I am not sure it would be right to have had him played by Samuel L. Jackson.  The guy handled horses, not briefcases…or automatic weapons.  All that is required is a lead rope, and a desire to care for a horse.

As jockey Ron Turcotte, full-time jockey and first time Otto Thorwarth is fun to watch.  Much like the jockey’s in Seabiscuit, he doesn’t mess around and let’s the horse have its head if he wants it.

Cuban Trainer Pancho Martin, read by Nestor Serrano, seems like the biggest stretch character wise.  His hotheaded histrionics and boastful nature seemed right out of the Disney playbook.  I half expected to see him fall from a high place at the end of the film, like Gaston.  Bill Nack, sportswriter who penned the book and portrayed in the film by Kevin Connolly said that lines in the movie came right out of his book and were recorded by Nack himself, which he still owns to this day.

All other characters are serious about their roles, and not to the point where they make smiley faces all the time.  There are many interests involved here.  Not necessarily divergent, but they are not just sitting around waiting to put the wreath around the horse either.  One can be divergent in interests while retaining civility and kindness.

That brings us to the horse.  Secretariat was a magnificent beast, by all accounts.  His wins have been recorded for all posterity.  I am not much in the way of an officianado with the horses myself, but Wallace has a knack for making his subjects look incredible.  I feel very fortunate to have seen this film in High Definition.  The sheen of sweat on the horses, the dirt flying up at those not in the lead, the thrill of in track and the infield grass are in ample supply.  The races are shown in such a varied fashion, they never get boring.  Best of all, not one major detail was fudged for dramatic purposes.  When he came from behind, it was not to a photo finish.

Other scenes, between owners and prospective investors take place in locales so unglamorous, they might as well be a snapshot out of time.  Most intriguingly, the scenes taking place in the clubhouse restaurants that look much the same today as they did back then.

The most breathtaking moment of the film is the last turn of The Belmont Stakes.  Like something out of a dream, the sound of the crowd is drowned out to the sound of the horse working, sweating, breathing efficiently like a well-honed machine.  It is among the more breathtaking scenes in movie history.  So well-played and so dramatic because they added nothing to it.  They only took away the crowd.  Well played.

A family film is not an easy thing to make well.  Too often, they come up with exceedingly poor dreck like Disney’s The Game Plan.  Secretariat is an excellent film for what it isn’t so much more than what it is.  Wallace and Rich have so much confidence in this material, they take a step back and lets it breathe.  Disney should sign them long-term.  It’d help their reputation a bit, even if it never appeals to extremists.  An autobiographical family movie does not need to show every wart or call out every horrific event in history.  It does not need to cure society’s ills.  It should make you smile and believe in the occasional unlikely event or happy accident.  It should be enough that me, my wife and kids loved it.  All for different, beautiful reasons.