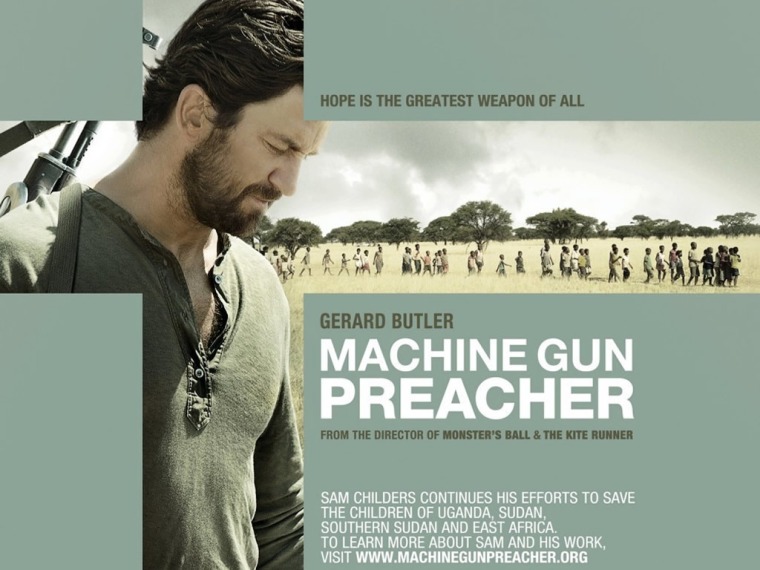 Sam Childers is not an easy man.  His path through early life was drugs, booze, prison and then he graduated to armed robbery for more drugs, and then to attempted murder.  Around the time he was getting out of prison, his wife, who was taking care of their child, stopped stripping, got a job earning “good money”  and found Jesus.  Things as they were, Sam (played with heart and grit by Butler) got tired of trying to wipe bad blood off his hands, his clothes, his soul.  He went to church with his family.  He found God.  It was a struggle for a while.  This film shows the true path of Christianity as a long hard road.  Sam and his wife (Monaghan), built on those struggles, eventually coming up with half-share in a construction company that allowed for his family to move out of their Mobile Home park and into a good house.  In the process, Sam took the time to reach back into his old life, grab his lifelong friend (the realistically pathetic Michael Shannon), help him sober up and then eventually get clean.

At this time in his life, Sam comes up with ideas, both of which his wife supports.  He is going to make a church in their town in Pennsylvania, and at the same time, he is going to go to Africa (specifically southern Sudan and northern Uganda) to “see what’s going on.”

What he finds there changes his life in a dramatic way, pushing him to the edge of his faith and, similarly, his family and friends to the edge of their faith in him.  The thing that works about this story is that because Childers decides to do something good does not make him a genius, or someone who makes all the right decisions.  Butler, in one of his best performances, shows Sam to be a deeply flawed, but even more deeply compassionate man.

When he sees many children seeking a place to sleep in the open at night below his hotel room on that first trip, he immediately goes down and starts rousing them up, inviting him into he and his friend Deng’s two bed room.  Sure, they won’t all fit.  The point is, he doesn’t let that keep him from trying.

Similarly, when armed men, working for the fabled leader of “Kony 2012” in the Lord’s Resistance Army, try to lay waste to the good he is working to build, he takes up arms without hesitation and starts firing back.  He is criticized by people at home and abroad for actions like this.  These people, for the most part, have no skin in the game.  His wife’s encouragement is enough for him to keep building…and keep using arms to save kids.

For those of you who views the work of philanthropy requires that one carry a stethoscope and pretend they are Angelia Jolie, this film will challenge that notion.  This film trades on hope, but it also shows real people making do with what they have.  Some have said that the mixture of guns and religion loses the message.  Sometimes you just need to escape to live another day for another shot at redemption.

This is an effective film, and I really have a sense for the man and his efforts by the time the credits roll.  At that time, you get the chance to see the real man and his friends and family.  While seeing this, a chill swept through me.  Sam Childers is a scary man, who is intensely determined to do what he feels is right.  His commitment, flawed or not, is greater than anything I think I could muster.  God might be able to do a better job, but Childers is the first of his children there.  And you can be sure he’s going to be the last one out.