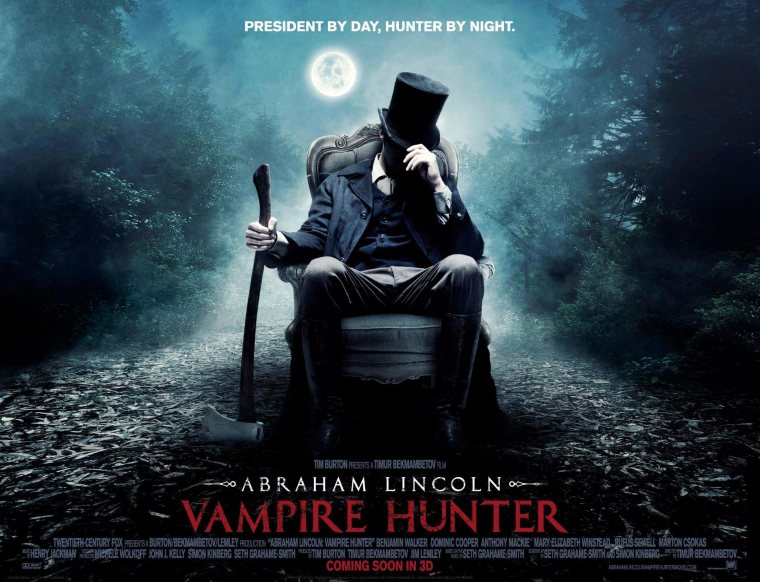 There is something good to be said for just going for it.  In the case of Abraham Lincoln: Vampire Hunter, we have a concept that is ridiculous beyond measure.  The 16th President of the United States presumably takes on vampires in his off time.  Said vampires being the backbone of the slave-owning south and just generally being bad guys over a few thousand years.  The interesting thing about it all is that the author does a respectable job weaving the mythical events in and out of the real events.  The only real obvious gaffe is the way they have Lincoln doing that Clinton soft thumb pointing that he developed so expertly 130 years after the Civil War.

Smith created a literary stir in 2009 with Pride and Prejudice and Zombies.  It was surprisingly well-received.  He followed that success in 2010 with …Vampire Hunter.  While the zombie film has met with difficulty getting a film adaptation, this one had no trouble flying right onto the screen.  Something moving that fast might be cause for alarm.  Good thing that Bekmambetov, director of Night Watch, Day Watch and Wanted. was recruited to bring the story to screen.

Bekmambetov’s style is one of style over substance.  There are many shots in Wanted that seem so preposterous, one would need to be daft to attempt to film them.  The best example is the bending bullets.  What should have been laughable is, instead, beautiful.  Just like Lincoln with the ax.  The fights in this film are better choreographed than anything since The Matrix Trilogy.  In fact, watching the scene with the horse stampede seems almost lifted out of the freeway scene of …Reloaded.  The magnificent scenes outweigh the silly ones by a long shot.  For every vampire you see being literally punched straight up through a wall (the long way) you see wonderfully simple scene under a pharmacy.  The train ride provides both the best (fight on top of the cars) and worst (walking through a burning trestle) moments all in one bloated half-hour.

The acting does not detract from the tone, for the most part.  Benjamin Walker is earnest and humorless, much like I would expect Lincoln to be.  Looking at his acting credits, I was pleasantly not surprised to find that he played a younger version of Liam Neeson in the movie Kinsey.  He is quite literally a doppelganger for the old action star.  Anthony Mackie provides a welcome presence as one of Lincoln’s oldest friends.  His is a black character that does not elicit sympathetic feelings.  He is a 3 dimensional person, not just a woe-begotten man of color impaired by slavery.  As the main antagonist, Sewell provides his usual excellence.  He is a man of great intellect, not just a suave beast with sharp teeth.

The only one that provides a wooden performance, sadly, is Winstead, who has been great in films like The Thing prequel, Live Free or Die Hard, as well as Scott Pilgrim vs. The World.  I think the problem is most likely the complexity of the character that is Mary Todd Lincoln being hard to bend into an action-horror film.

If you are on the fence about this one, take my wife as the example of the average viewer.  She has no use for horror films, thinks not at all of action movies and generally leans toward Jane Austen type stuff.  She stayed seated within the vicinity of the television throughout the running time.  By the time the credits started to roll, she looked at me and rose to her feet.