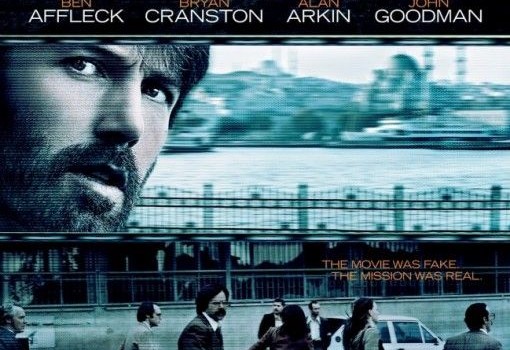 Alan Arkin is remarkable.  He’s been doing the same shtick for 50 years.  You would think it’d get old by now.  It hasn’t.  It’s a credit to him that he has pulled it off, but it’s as much a credit that directors believe in him.  The director of the real movie of Argo, Ben Affleck, has not only placed his faith in Arkin, though.  He has shown, in the span of three films, that he is willing to place his career in the hands of many.  The key for him is his ability to stay silent in front of the camera and let everyone else fill the screen.  In Argo, the talent behind the screen is equal to the talent in front of it, this includes the director and actor Ben Affleck.

A story about the embassy diplomats that were not taken hostage in Iran, it was the less famous of the stories coming out of the revolution, even if they already made one movie about it.  The story is weighted by significance, yet the transitions from scene to scene is constantly tense in the most invigorating way.  Given that, in typical Hollywood fashion, only about 35% of the film is correct, it still stands for entertaining fare, and a Reader’s Digest Drama In Real Life snippet of history.

What we get to see is, in essence, the American version of the story, where most of the heroes and ideas come from the U.S., with a Canadian Ambassador holding the house open for guests for one long weekend.  For this, the film deserves some fair criticism.  There is glossed over and downright misleading  representation for some countries (Britain and New Zealand), to an extent that New Zealand’s representative government wasted time condemning the way they were treated.  There are several invented close calls, including a downright silly trip to the Bazaar which only could happen to ramp up the drama in a film.  The amount of contrivances are enough to push the film into ABC Movie of the Week category…if not for that sterling cast and the sense of space in the film.

Most of the dramatic license is for the economy of making movies.  You have to want to watch.   If every country other than Iran is nice, and the close calls aren’t close, and the U.S. isn’t the underdog, then who would want to waste their time?  It would be like watching the Hobbits make their way to The Prancing Pony.  Sure, there was a little tension, but they made it relatively unscathed and in, like, one day.  We need Ben Affleck the director to throw a spanner in the works, and the actor to stand there, looking pensive, wondering how he is going to remove that spanner from, you know, the works.

He does both things well.  One of my favorite aspects to Argo is watching Affleck’s voiceless countenance watching, really watching, the other talent on the screen.  The ability to look like one comprehends the information in front of them is the hallmark of a good actor.  He is getting there by leaps and bounds, and I really think this is due to the time he spends framing things in the lens.  We get to see Ben’s CIA Agent Mendez watching, while Goodman’s John Chambers, Arkin’s Lester Seigel and a few rotten million Iranian revolutionaries chew up real estate.  The effect is chilling, and it makes his few words well worth hearing, even if they are not all that remarkable on paper.

Affleck smartly relies on Goodman and Arkin to carry the momentum of the remarkably chilling opening chapter of the film, providing a one-two punch that allows the last half of the film coast through clichéd crisis after clichéd crisis.  And we buy it, for the most part, without question.  The saddest thing about this is once you are past that part of the film, you realize that even though the depiction is based on the true risking of life of real people, it is effectively the meringue on top of the pie.  The escape, in and of itself, is not enough to thrill an audience, according to the studio research.  Well, either that, or its too hard to tell the story intelligently and truthfully both.  This is where good acting can usually win the day, and this is where Argo succeeds.

Affleck has made an American staple story here, and one can see why it won the awards that it has.  Hollywood, just like Seigel says to Klein, wants to be bullshitted.  In that respect, we all got our money’s worth with Argo.