Skip to content
Phantom: That clunking you hear is not the sub
2 Stars

Phantom: That clunking you hear is not the sub 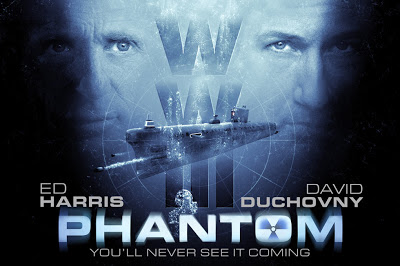 There is a point at the beginning of Phantom where the boat crew is prepping K-129 for its last mission.  As we get exposition from many of the principal cast members, we see nameless crewmen pulling endless amounts of rope along the edges and the top of the submarine.  For several minutes and from several angles we see endless amounts of pulling.  Where are they pulling the rope from?  Where is the rope headed to?  It does not really matter.  This is what the Hollywood types call “having the extras look busy on a budget when the camera is rolling.”  The film is filled with such moments, each more agonizing than the last.

A low-budget thriller “inspired” by true events, Phantom has more clichés than a political convention:

It’s not like Phantom is a total loss.  The acting is way better than this film deserves.  Fichtner, Harris and Duchovny all do a good job with the material.  If you like those three, then it’s worth a rental.  Especially if it’s a free one.  It’s not their fault that Robinson took the inspiration from the mystery of the lost Russian ship and just joined the scripts of Harris’ own The Abyss and The Hunt For Red October and created a mish mash unworthy of either of those films.  In what may be the sole good decision by the filmmakers is that they absolutely ignore the Russian language and speak English all the way through.

The essence of the story is interesting, but it so poorly draws from other material that one can’t help but wonder if the script was written while watching other submarine scripts.  Here’s an important safety tip.  Next time, finish the movie, then write when there is nothing on-screen to distract you.