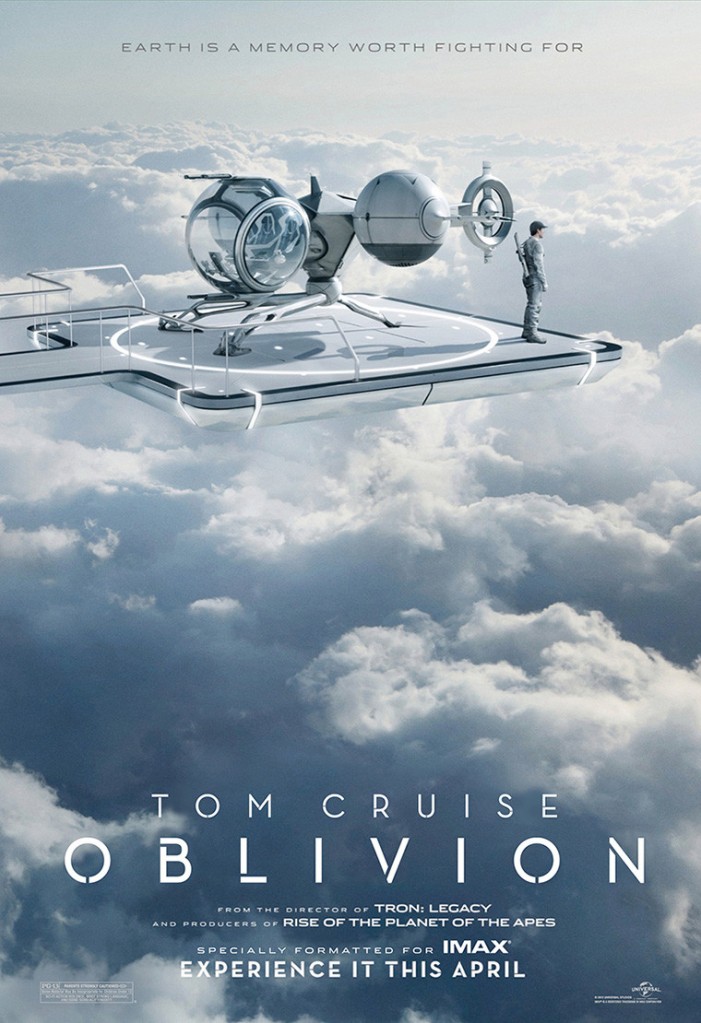 So many elements are borrowed from other sources in Oblivion, it’s remarkable that it ends up as cohesive as it is.  That the sources all derive from the more contemplative sci-fi of the 1970’s may have something to do with this.  The story of a team of “maintenance” workers, who go about repairing drones that go around killing what are supposed to be the remnants of an invading force that destroyed the moon, and then slugged it out with what was left of Earth.  Jack Hunter, aka Tech 49 (Cruise) has questions about existence, his role in the grand scheme of things and a wish to explore the planet.  His partner, Vicka (Riseborough) has none of these questions, and she can’t wait for their tour to end, so they can go off and live happily ever after on their way to the other humans.  The characters, whose memories were erased prior to their deployment for security reasons, make a big point of repeating that we won the war with the invaders.  We are told that survivors live on the space station, and there is some word about a moon of Jupiter being a destination.  When one views the vast waste of what remains of the planet, it’s kind of obvious there can’t be that many survivors.

Not that the planet looks that bad with fewer people on it.  There was all sorts of natural disasters, nature seems to have worked itself out.  It makes one wonder why Earth’s leaders did not leave a contingent on the planet to salvage a life, a colony or something.  Giant machines make use of Ocean water as fusion for the Tet station.  Jack enjoys his time in the ruins, and envisions time before the invasion, even if he never experienced it personally.  Soon enough, events happen to compel him into breaking the status quo and risking everything.

Cruise is in good form here, even if with his amnesia, his character lacks any real distinctive personality traits.  Same goes for every character, though, even those without memory wipes.  This is necessary, I suppose, to give the characters somewhere to go.  It works, at least, at least for our protagonist.  Overall, the lack of strong characters is rendered less necessary with the stunning visuals supplied by Claudio Miranda, who won an Oscar for his work on Life of Pi.  There is so much beauty everywhere that it is hard to look away.

One requires a tremendous suspension of disbelief to take in the last 1/3 of the movie at face value.  The character represented by the usually deplorable Melissa Leo fits her personality to a tee.  Still, someone so cunning and ruthless would be unlikely to let her guard down.  It all matters little in the grand scheme of things, though.  The movie is so breathtaking in its cinematic scope, the small stuff seems even smaller than usual.