“Whether one enjoys this film or not depends on how drawn one is to Wilkinson, Price and Vaughn and how much someone can withstand Franco. Don’t rent this if you are looking for a comedy, but don’t expect to be as disappointed as you’ve heard. “ 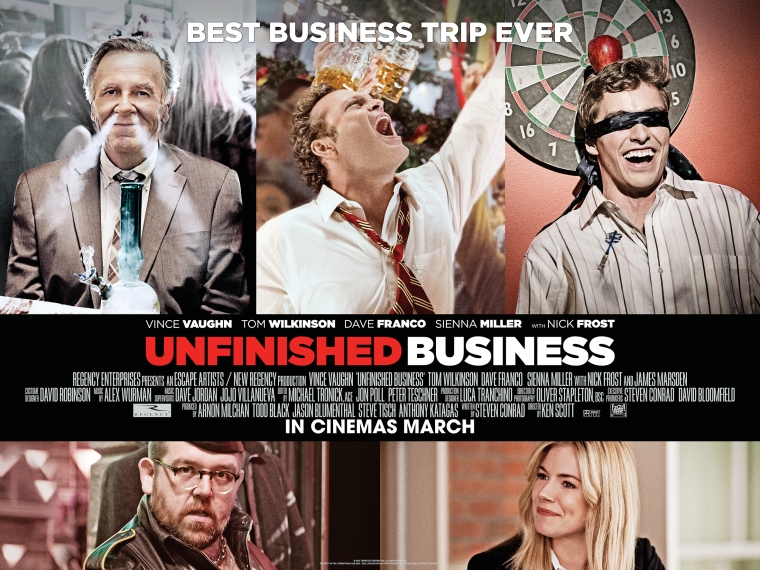 The thing about Vince Vaughn’s movies lately is that they give lip service to living on the wild side of life. There are drugs, sex and darts in the chest. But that is not really what is going on here. Vaughn is often working from the angle of a man either finding responsibility overcoming the odds, or both. If it’s not always the funniest thing to watch, there is something very pure about it. It’s obvious that Vince and the people he chooses to make films with have a set of beliefs that they will not surrender, even if it costs him the reputation as some sort of irreverent Murray-type funny man.

The premise of the story here is Vaughn as St. Louis salesman Dan Trunkman, coming off his best year and discovering that this doesn’t hold water with his boss (Miller). He tells her where to take her 5% pay cut and attempts to leave the company in a blaze of glory. What he ends up with is an old man (Wilkinson) who has just been forcibly retired and a rube (Franco), who was there for an interview. They form a company, meeting at the local Dunkin’ Donuts. Some 12 months later, Dan informs his staff that they all need to go on a business trip to meet with potential investors played by Mardsen and Frost.

Meanwhile at his home, Dan has two kids who are the subject of teasing at their respective schools. The younger girl (Anderson) handles it by beating the tar out of her nemesis. The older boy (Sear) is more passive and his tormentors outnumber him severely. His wife (Raphael) soldiers through valiantly, but it’s obvious that Dan is needed at home to help out.

While in Portland, Maine, he runs into the old boss. The scene is then set for yet another trip to Berlin, Germany. It is here that the fish out of water part of the story kicks in and stuff starts going haywire. The object for the team of salesmen is to get a handshake deal with Marsden and Frost’s boss. The happenings here get increasingly complex as the team assimilates with local elements all the while finding time to pursue their personal and professional goals.

Some of this is funny, but not much. Part of this is due to the presence of Franco, who would need a pony to become a one trick pony. His skill is looking stupid, naive and then a stoned version of stupid and naive. There is a forced sweetness to the character that works occasionally. Overall the character is wasted.

Wilkinson fares a little better, mainly because he is Tom Wilkinson. He wants a divorce and wants to be intimate with a woman for the first time, after having shared a bed and had sex with his wife for years. Not sure I know what the hell that’s about, but he sells it.

Nick Price is fun as usual. He is placed in the most outrageous circumstances. He excels at being someone you can talk to as the world is running down.

Vaughn is not really going for comedy here. He’s going for drama that has a likable funny person at the center. As such, his performance is endearing only in the way that any guy could keep his eyes on the prize as Germany happens around him. His attempts at communication with the family have only one thing that stands out. If the questioning gets difficult Dan stops moving and the family assumes the connection went bad.The great thing is, they have enough going on in their lives they don’t bother to notice when his background moves behind him.

The direction and the story are competent. There is nothing riveting here, but there are moments that one can respect for the attempt at craft. In this way, it’s a lot like many Vaughn movies made since he got married.

Whether one enjoys this film or not depends on how drawn one is to Wilkinson, Price and Vaughn and how much someone can withstand Franco. Don’t rent this if you are looking for a comedy, but don’t expect to be as disappointed as you’ve heard.