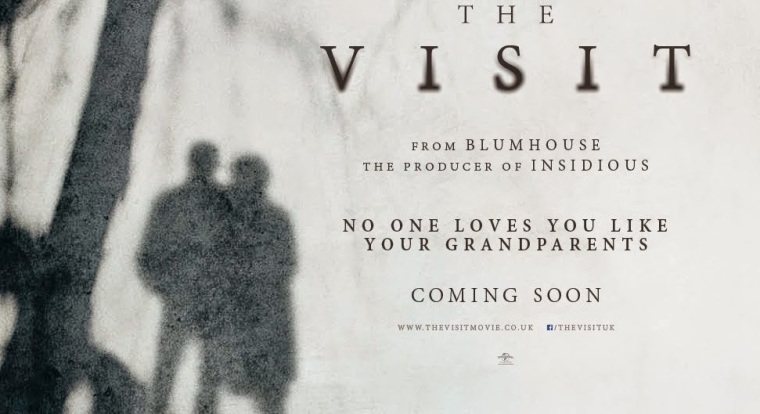 Let’s get the slumping career stuff out of the way. I mean, let’s not even discuss it. You either have enough juice to make a movie or you do not. This movie is made. Done. Finished. And it’s presented a clear trajectory for Shyamalan’s career going forward. Overcome expectations. Were it not the way that everyone should live, this would be a revelation.

The Visit takes a very basic premise, that of Little Red Riding Hood, and extends it over an hour and a half. Essentially we get to see the kids asking the wolf in Grandparent’s clothing why they have such big teeth. This in the bird’s-eye view would not be as scary, but Night adds clever interplay, some coincidence worn down to the bone and some decent performances to make this an above average horror delight.

Paula (Hahn) left her parents 15 years ago in a dramatic way to marry one of her high-school teachers. 2 kids later, the high-school teacher found a high-school aged barista at Starbucks as his new project. Now she’s on the verge of a new relationship and is in the process of re-establishing a relationship with her parents, who found her on the internet. Send your kids to visit us, they say, while you take a cruise with your new boyfriend. She doesn’t want to send them, but the kids, unlike any two kids in the history of childhood, actually want to go visit. So she relents and sends them on a train.

The oldest, Rebecca (DeJonge), wants to be a film director. This means she will have a camera with her. Well, two, actually, because a face like hers, which never looks in the mirror, should be on the camera at least half of the time. And really, we need different angles. So her brother Tyler (Oxenbould) gets to hold a smaller camera. They put the cameras down long enough for us to see them hug the grandparents that they have never seen from a distance. It’s an awkward, distant shot. Everyone is a bundle of nerves.

So yes, it’s another found footage film, and I am not going to spend much time trying to convince you whether it is better or worse than all the others of its kind since Blair Witch…. Frankly, that most of them suck and this doesn’t should be enough. The cinematographer Maryse Alberti has a track record that varies between live action and documentary(The Wrestler, West Memphis) and it shows. We get plenty of both and it helps.

The script is decent. There are some genuinely funny moments and enough semi-explainable gross outs to keep the kids on edge, but not running for the hills. Sure, Grandma (Dunagan) and Grandpa (McRobbie) make some strange decisions during the day and do some even weirder stuff after hours, but this is explainable because, you know: old people. Night tips his hand a little too often (one person coming to the house to check up would be enough / once in the oven should be enough, too), but he also gives us enough things for kids to work through that we understand when they give the old coots the benefit of the doubt.

The last act is punchy and some nice moments, especially the decision for family board game night. The anger over who created Yahtzee is brilliant. It also provides some incredibly dumb moments (why would you ever go down into a dark place, when really you should run).

The acting is great by most of the principals. Granny has the best moments, what with her complete lack of self-awareness that her dress is split down the middle in the back. Grandpa’s collection of bags is very disturbing, but who hasn’t had contact with older folks who are fraying at the edges while being pretty normal (and prideful) in general.

DeJonge has a real future. She plays Rebecca straight as an arrow, but she is also better at showing vulnerability than Night is at writing it. Poor Tyler has to pretend he is a white boy rapping. Night even wrote the raps himself. This would have been better if it had been done just once, horribly. The rest of the time, Oxenbould and DeJonge have a believable connection.

That this feels more like the film of a young director than one of someone in his third decade of the craft is praiseworthy to a point. He still has energy for the art, but still does things that having experience should help him avoid. While it’s not exactly the fall into oblivion that Francis Ford Coppola has met, there could be several slightly above average films on the horizon from Shyamalan before we can expect the next Unbreakable.