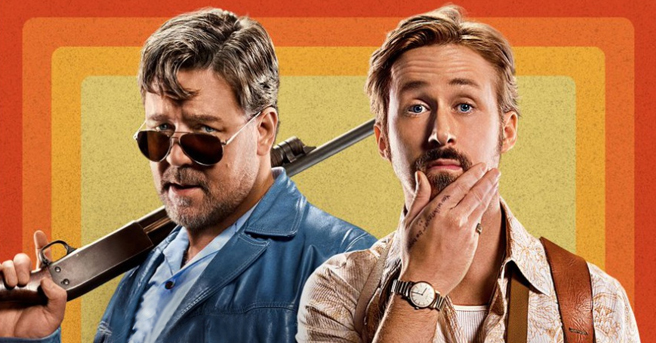 Thus goes the career of Shane Black. He directs one of the top grossing films of the past decade (Iron Man 3) and immediately sets to making the movie he’s been wanting to make for years before that. Of course it’s funny as hell, while filled with strangely realistic action scenes. Not one scene will leave action-comedy fans without a genuine smile. The story, the acting, the direction are all spot on. And it fails at the box office. Why?

For one thing, it lacks glamour. Oh, there are pretty women all over the place, but they don’t look as great when they’re knocked over during a chase scene or hit with an errant bullet. We even have the familiar Black intro with a pretty girl dying spectacularly.

Speaking of dowdy, I am not sure I have seen Crowe look as disheveled as Jackson Healy, a tough guy who’s not going to bother getting a license as a Private Investigator. He’s kind of looking like post-Godfather Brando by now, but I get the feeling he’s doing it on purpose. His skill is easy to miss at this point as I am sure most people would if he hadn’t already won an Oscar. He is so relaxed within the frame of his character, he’s almost a part of the background. Albeit, he’s a part of the background that can tell you to have your doctor check for the spiral fracture he’s about to apply to your left arm. It’s fun watching him play a man who is a bruiser, but not a mindless one. If the odds are against his taking action, he will duck out until the odds change. It takes courage to look smart enough to modify your brutal nature. Most actors can’t do this.

Ryan Gosling is as much a chameleon, but at an earlier age. His Holland March is a licensed PI, but you wouldn’t know it based on his ethics. He is an alcoholic widower raising a 13 year old girl after his wife died a few years earlier in an explosion. My guess is we find out it was not an accident if they ever do make another film. His condition is pliable enough that he is able to piece together who can help him and who cannot. Since this is a buddy film, one can guess who that will be.

His daughter, Holly (Rice) is somewhere between Holland’s conscience and his enabler. Seeing her driving him up to meet Healy after March had a few drinks is a gem of a scene. He is jamming away, singing The Band’s cover of Ain’t Got No Home as if he’d been born to sing along. It’s not a tremendously well known song, but you wouldn’t know that from looking at father and daughter. They look so familiar with it. She has a habit of asking men who are important to her if they are “a nice guy.” This could be answered quickly and honestly with “I do what it takes to stay living.” Both March and Healy answer her differently.

The interplay between Crowe and Gosling is deftly handled. There is no one writing about interpersonal dealings between partners as well as Black, even after all these years. The connections are rarely obvious or telegraphed. One has to know for what they are looking. It’s a credit to both actors that they pull off Black and partner Bagarozzi’s subtlety so effectively. I don’t think I have seen Gosling this charismatic. Both are full-fledged persons capable of good and bad moments without unnecessary flare. For this reason alone The Nice Guys is worth watching.

Almost as good is Holly. She’s in a lot of places that kids ought not be, and the excuse for that is thinly played. We get that Holland is not a good father, but does he have no one that could have helped to watch her? It plays well for a few scenes, but by the time we get to the last act, it’s become anathema to the desired effect on the viewer.

The challenge with The Nice Guys is definitely the ending. The MacGuffin everyone is chasing ends up a disappointment. It’s a shame, too, because they waste not only a great pair of well played minor henchmen (Knapp and a very welcome Keith David) but also a supremely scary Matt Bomer. The bad haircut, the delayed reveal and the name (John Boy) make for a performance I had no idea Bomer was capable of based on earlier work.

There are also several production gaffes with the film. They go out of their way to point out the film takes place in 1977, but I would guess over half of the musical references take place after that year.

These points alone should not dissuade you from seeing this good film. It doesn’t keep me from wanting to see a sequel.