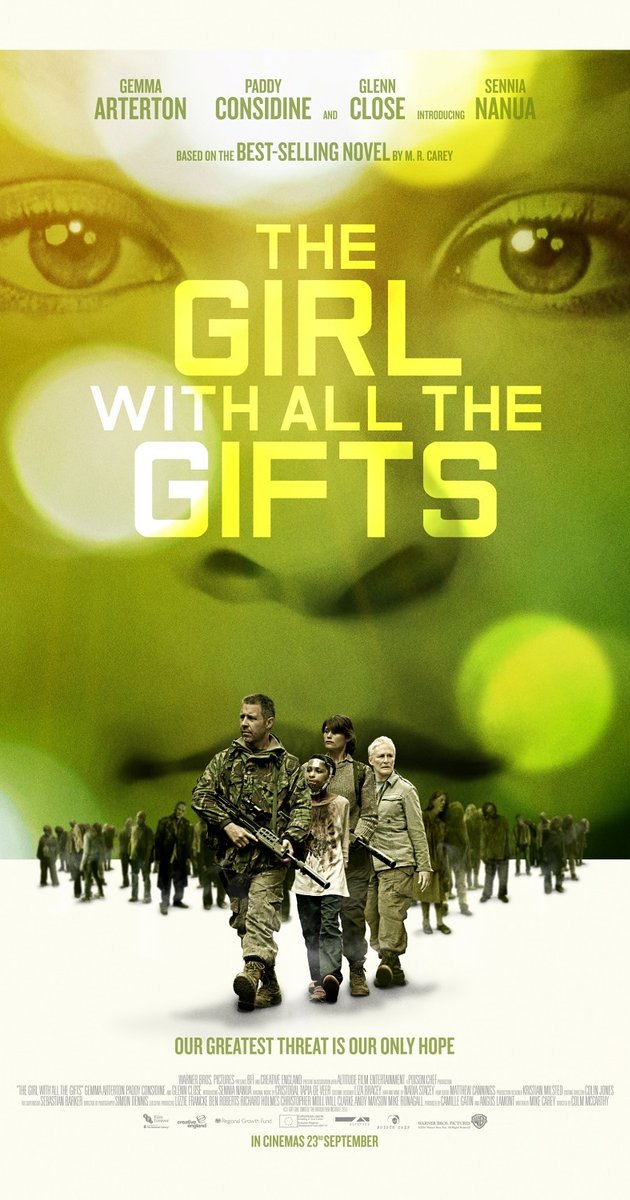 In an age where so many stories abound regarding the end of the world into a land filled with zombies, it is truly tough to parse an original story out of the mix. Let’s not forget about dystopian films too, for The Girl with all the Gifts is literally the representation of a society at the next stage with its children as objects of study, because they are a source of a hopeful future.

We begin with Melanie (Nanua), who is a prisoner, along with many other kids at a research facility. She is very polite to her captors. Indeed, it is apparent that she’s known no other life beyond captivity, so every behavior she’s experienced is normal to her. This includes being strapped to a chair, having guns pointed at her, being called horrible names. And her daily teaching sessions with her co-captors. Melanie loves learning, loves her fellow students and her teacher, Helen, most of all.

Indeed Helen shows her students genuine humanity, to the point of even touching Melanie on her head after being particularly moved by a story that the child wrote. This action brings an immediate lesson the commander of the base (Considine), who demonstrates what it is that requires these children to be placed in constraints.

That there is a plague of zombies is revealed even in the poster. The children have the duality of being afflicted and seemingly normal. They are not, of course. This doesn’t mean they are not bad. They’re just not polite eaters.

Looking for a cure to the fungus that is causing the zombification is Dr. Caroline (Close). She sees the key in Melanie and is about to close in when the base is overrun, leaving the central characters on the run. In the process, walls are broken down between the captors and Melanie.

The fascinating thing about The Girl with all the Gifts is it’s take on the premise that being human is the perfect destination. We have seen the crusted, horrible faces of the undead for so long, we don’t ever consider that they may not be dead at all. They are, perhaps, the next stage of the evolutionary process. The best thing about this movie is where other movies try to give answers, The Girl with all the Gifts asks questions.

Every conversation with Melanie and those who see her as afflicted is handled with such intelligence and curiosity, it is remarkable to watch. Melanie is anything but afflicted. Sure, she has an appetite, but her conscience is in fine working order. Her character is fascinating for her openness, genius and compassion. Nanua plays her perfectly and brings to life one of the best pre-pubescent characters that has ever graced the big screen.

The story wanders a bit through the middle, but it never loses focus on its purpose. That purpose is to show us that Melanie understands everything eventually, even if she can’t put a name to it right off. The discussion between her and Dr. Caroline regarding Schrodinger’s Cat is the key to understanding both characters.

All of the principals are exceptional, playing their part to perfection. Each has a part to play in the development of Melanie, even if they are only concerned with the survival of their kind.

The Girl with all the Gifts should be an essential story for us in order to attenuate our perspective on humanity. Is being human a static state, or is there something more to it? The questions it asks are eternal, even if we may not like the answers.