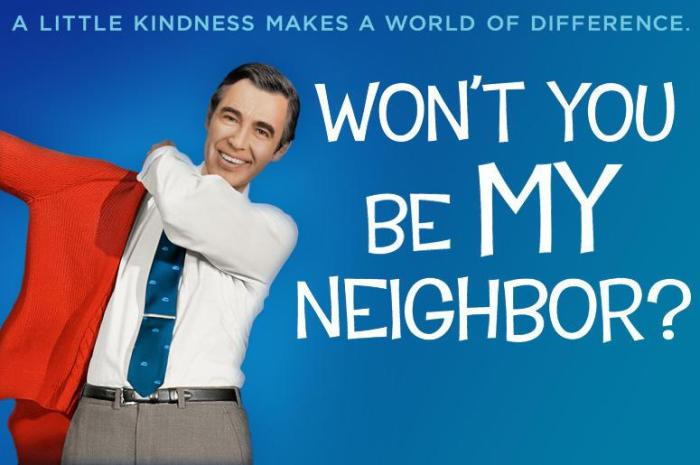 My childhood memories are scattered with images and the soft voice of Fred Rogers. He knew the wisdom and value of questioning children and then sitting back, listening to their answers. The show had its own pace, to be sure. It countered almost everything else placed out there for children, which was loud, fun, but obnoxious.

His Mr. Rogers Neighborhood lasted 31 years in one form or another, mostly on Public Access. Many children grew up learning that they were special and worthy of love, no matter their circumstance, due to this wonderful ordained minister. He truly did God’s work, even if he never explicitly said it on air.

Love is at the root of everything – all learning, all parenting, all relationships. Love or the lack of it. And what we see and hear on the screen is part of who we become.

Morgan Neville’s carefully crafted documentary gives us the full scope of the vision Mr. – I cannot call him Fred – Rogers had in starting, then maintaining his show. Most children’s television of the time was like a pie in the face. Somewhat dehumanized slapstick. That might work for kids at some point, but so did just listening, using your imagination, questioning and silence.

I got into television because I hated it.

One memorable exchange shows Rogers facing Senator Pastore in Congressional Hearings regarding funding for PBS, which had been started by LBJ and then was in jeopardy by the Nixon administration.

Instead of reading a prepared statement, he talks directly to Pastore, and in his typical, direct manner, he lowered the tone to exemplify how little it took to show a child that he cared.

Rogers, a lifelong Republican, convinced a very skeptical Pastore in 6 minutes and change, giving him “goosebumps” for the first time in the hearings.

We get a clear vision of Rogers’ grasp on bringing the larger events into the focus of a child. Racism, assassination and disastrous events were given clarity in a compassionate way.

The greatest thing that we can do is to help somebody know that they’re loved and capable of loving.

Neville has a rich subject and he takes advantage of the access. If anything, one wishes there was even more to the salad days. He spins through to the lost period, when Mr. Rogers decided to see if he could connect with adults the way he had with children. This was less successful, but no less beautiful.

The entire last half of the film is riddled with poignant moments to the extent it is hard to keep control of one’s emotions. The tears that are elicited are as much for joy as anything. It makes one glad to have witnessed this, and long for a chance to go back and take it in once more for the first time.

If you know who Mr. Rogers was, or even if you didn’t, you should watch this film.