Moon (2009) Starring:  Sam Rockwell and the voice of Kevin Spacey Director: Duncan Jones Moon is by no means original.  It has a very slow, somewhat awkward pace that kind […] 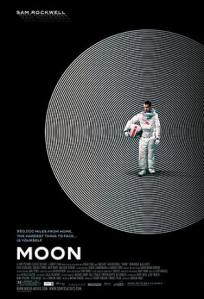 Starring:  Sam Rockwell and the voice of Kevin Spacey

Moon is by no means original.  It has a very slow, somewhat awkward pace that kind of ambles in spots.  It feels like it could have been made in the 70’s without skipping a beat.   I liked it.

The film opens to Sam Bell, a man under a three year contract, waking up and going through the paces of a normal day as the lone representative of a company called Lunar Industries, working on extracting an element called helium-3, which is some sort of miracle cure for our energy woes.  That he is alone, except for a HAL-like digitally-based companion called GERTY is a contrivance of the plot.  With so much at stake financially, it would be easy to imagine that place swarming with individuals performing redundant duties.

This issue, however, gives the plot some traction as Sam is immediately and conveniently placed in peril.  Next scene, you see Sam waking up on a table in the infirmary, informed by GERTY that he has been involved in an accident and he should be on his feet in no time.  Things don’t sit well with Sam and he eventually sneaks his way back to the scene of the accident to make a discovery that sets him literally beside himself.

There is an natural essence of claustrophobic tension in the film.  It asks classic questions about the nature of man’s role in the world and in relation to technology.  That some of these questions are redundant is of little consequence.  As GERTY, Kevin Spacey tackles the unenviable task of playing HAL with the conscience of a Roman Catholic.  He does this well, even if it makes little logical sense.

As Sam, Rockwell is up for the task of conversing, literally with himself and a robotic intelligence.  He presents many sides that all can be the composite of a man in a cycle of existence removed from everything.  His performance is easy and unforced, for the most part.

One would figure an unoriginal premise in a genre long forgotten with the character composition range of a daisy air rifle might be closer to a dud than a promising feature.  This is a demonstration of acting and directing skill.

The director, Duncan Jones, is David Bowie’s son to his first marriage, Angie.  He stretched a 5 million budget in to a movie that looks at least 10 times that.

Not wanting to give any thing away, I will leave it at this:

Some movies just got it.  This is one of them.