Skip to content
The Losers strives to reach mediocrity
2 Stars

The Losers strives to reach mediocrity 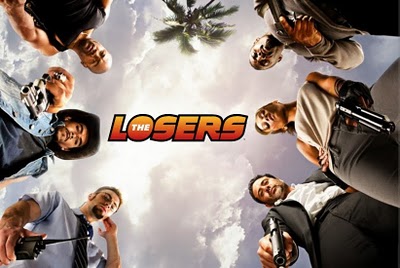 Zoe Saldana is on a roll now, as the Star Trek reboot and Avatar have shown.  She figured prominently in the ad campaign for this film, and she (as Aisha) is featured even more prominently.  The effect she has is somewhat negligible.  Several of her scenes, including the first date/fight scene with Jeffrey Dean Morgan, Clay, have no overall real effect on the film.  She can handle a gun to be sure, and there is a lot of that in the film by everyone.  Essentially this movie feels a bit like The A-Team (the show, not the movie), except everyone can hit their target and still (thanks to the PG-13 rating) nobody bleeds.

Having really enjoyed him in The Watchmen, I was looking forward to seeing Morgan handle another action lead in this film.  He has charisma, but, for some reason, he buries it here under tons of dour “responsibility.”  Of course, after having watched a helicopter full of kids blow up at the start of the film, he spends the rest of the movie skulking about, reminding everyone that HE, as the leader of the group, has to make things right.  No fun to watch someone drone about in their feelings of guilt while everyone else seems to be having so much fun.

Clichéd characters with names like Jensen, Roque, Pooch and Cougar, you’d figure this movie’d be a laugh every half-minute, but everything here feels forced.  Chris Evans has a little bit of fun as Jake Jensen, especially the scene in the “Goliath Worldwide Headquarters”  but by the time he is confronted by the three armed security guards, the scene feels a little long in the tooth.  The guy who helps conclude that scene, Cougar (Jaenada) has some resonance with his sharpshooter role, but his exposure is so limited that I think that might be why.  Colombus Short’s “Pooch” is another pleasant caricature used to less an effect.  Pooch has a wife expecting a child, who spends most of the movie believing him dead.  Somehow, he finds the humor in the situation, up to the end, when he makes a surprise appearance at the moment his wife giving birth.  This is supposed to be funny.  It’s not.

Elba has an odd mystique.  Getting huge critical raves in the HBO series The Wire, he has had a plethora of roles thrown his way.  Thing is, every role I see him in, he plays the same humorless guy.  This movie is no exception.

What’s funny is how they got Jason Patric to do this movie.  He’s had such an odd career, I think it’s amazing any time he shows up on-screen.  He says all the right lines in this one and has a fair amount of cruelty.  Looking at his face, though, I sense not even a small dose of menace.  Don’t get me wrong.  He is a good actor, bordering on great at times, but he’s has such a kind face…

This movie hits the notes, but still does not reach anything close to the tune of excitement or relevance.  What is missing?  I am not sure.  James Vanderbilt, one of the writers of the classic Zodiac, co-wrote this with Peter Berg, who has written some good (Friday Night Lights) to not so good (Very Bad Things) stuff.  The story, an adaptation of a comic of the same name, could be to blame.  It’s been done tons of times.  I don’t know if the movie was directly lifted from the comics, but I can say the movie does not make me want to check.

Of White, the director, I know even less.  Never wanted to see Stomp the Yard and the title I’ll Always Know What You Did Last Summer speaks for itself.

If you see this, I think you will know what to expect.  Provided you can live with your choice to sink an hour and a half into a series of explosions and cheap one liners, have at it.