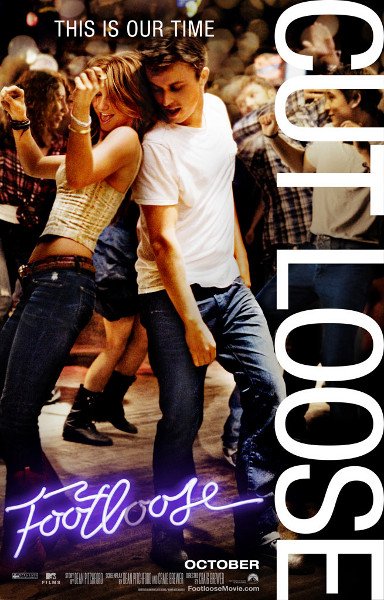 It took me a while to learn to appreciate Kevin Bacon, and when the original Footloose was released, I was still in the warming up phase.  The premise of the story was a tad old-fashioned for its time, seeming more like an episode of Twilight Zone than a motion picture.  Who could imagine such archaic laws in the 20th Century?

Now it’s the 21st Century now, and the story seems even more antiquated now.  Fortunately, in the hands of Craig Brewer, the characters seem more realistic in this version.  This time, instead of Mom moving back to the small hick town with Ren McCormack, she has passed away.  He now moves in with his Aunt and Uncle, played comically and lovingly by Deadwood veterans Dickens and McKinnon.  Dennis Quaid is the preacher, with less of an intimidating and more sympathetic presence than Lithgow.

The kids of the town are better this time around.  Miles Teller as Willard is the standout of the film.  His role as the best buddy of Ren is rife with moments of comic gold and natural charm.  That he has a relationship with a schoolmate of mixed race (played thoughtfully by Colon) is a welcome development.  There is nothing special made of this.  Times have changed, and we continue to advance in some ways.

In point of fact, the cast integration is definitely a plus.  Not only about race, but showing people in all shapes and sizes.  At least we still have a few hicks and dopers to fall back on.  The fight at the Prom and the gathering itself is very satisfying and something that exudes positivity.  That I did not get this the first time is more due to the fact that I was 13 and not that crazy about most of the cast.  Especially Lori Singer.  I never did learn to like her.

Footloose as a tale has always had an interesting morality.  Kids who were not interested in drugs or drink, but up for dancing, is something of an anomaly, even when you compare it to the opening of the film.  The parents of the remake seem a bit less enthused about the practicality of their paranoia, and that is good.  The “town with no joy” part of the movie never did work.

As for the dancing, they at least hired dancers this time around.  Hough and Wormold handle their moves with aplomb.  Their acting didn’t distract from the story, like Singer’s did first time around.  Wormold holds his own in a lightweight role.  I am not sure what the future holds for either.  Perhaps a remake of West Side Story.  Kidding.

The song choices, for the most part, mirror the first, with one disappointing exception.  The song that replaced “I’m Free” sucked, frankly.  As a result of that choice and some weird editing, the ensuing dance moves made no sense at all.  There were some real good new songs, though, from Zac Brown and Lisse in particular.

This movie was tight, and it would have been better, had they not overreached and made it a PG-13.  The dialogue is filled with expletives that are awkwardly out-of-place.  Kind of like a prepubescent kid bragging about that girlfriend he had the previous summer in Canada: it feels like someone who’s britches are a little too big for them, ironically.  Settling for less obligatory salty language would have added to the film’s overall cheerful tone.  They can keep the fighting.  It was actually pretty cool.  Better than the fighting in West Side Story, at least.