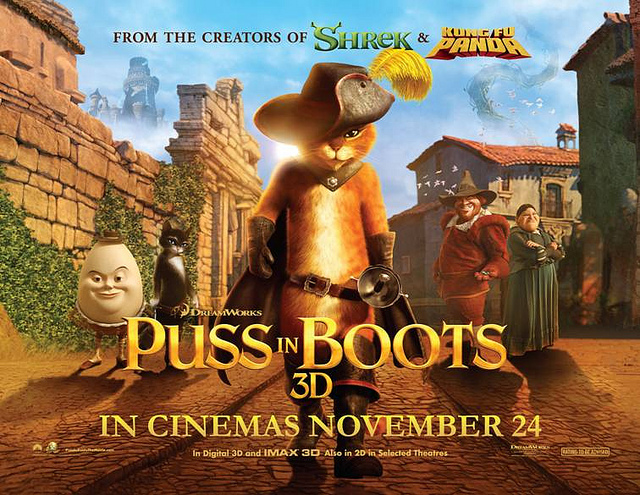 Having been weary of Shrek for some time, a movie based on the Puss In Boots character is still an intriguing premise.  Puss was the only good thing about Shrek 2, and since then the only character worth revisiting in each successive film.  The best thing they could to would be to start mining other faerie tales with the offshoot movie, instead of trying to use “hip” modern references, which so aged the Shrek series.  Beyond that, it remained to be seen whether the movie could survive expanding such an intriguing supporting character.

Well, they succeeded, for the most part.  The character Puss (Banderas) is smart without being a genius, intriguing without being overdone, and more than a pair of adorable eyes with a sharp retinue of pads, paws and claws.  Giving him an erstwhile partnership with Humpty Dumpty (Galifianakis) was an inspired move, giving a back story that provides depth to both.  Additionally, the insertion of a worthy companion in Kitty Softpaws (Hayek), matching him in guile and showing interest without being too much of what we’ve seen before.  The usage of Jack and Jill, (Thornton and Sedaris) was somewhat underinspired, but Jack “Andy” Beanstalk (Mitchell) makes a welcome and clever appearance.

The animation was superior, but this is to be expected from Dreamworks by now.  As crisp as Kung Fu Panda 2 and How To Train Your Dragon, with a pallet of vibrant green and soft brown hues, there are plenty of opportunities for 3D without making watching it a chore.  At this point, its style points that count, and Puss In Boots has style to spare.  Some of this is due to the influence of Del Toro, who served as Producer and voice for the Constable.

When all is said and done, it’s a pretty skimpy tale.  There are opportunities aplenty to play on the habits of cats, and they hit a few of them here, like milk in a shot glass, cats chasing lights and the “litter box.”  Even better is the “ooh” kitty, who shows up to augment any tense situation.  The movie could have benefited from a few more.  It was good enough for my kids, though.  They just watched it 3 times.