Shame – 2011 Directed by Steve McQueen Starring Michael Fassbender, Carey Mulligan, Nicole Beharie, James Badge Dale Written by McQueen and Abi Morgan At the beginning of Shame, my wife and I […] 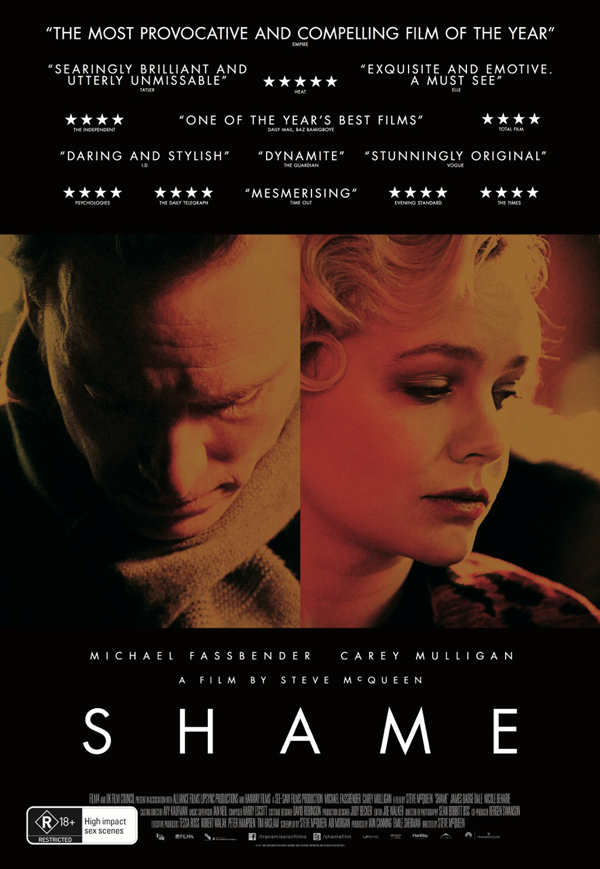 At the beginning of Shame, my wife and I were discussing the countenance of Michael Fassbender.  I think that she was pretty close when she compared him to a combination of Campbell Scott and Willem Dafoe.  After he stands up and goes to the bathroom, I decide that we better add Mark Wahlberg to the mix.  Or Huey Lewis.  I am forever scarred.

Fassbender is Brandon, a sex addict who happens to have a good job.  When asked about relationships by a girl from the office that agrees to go out with him, he says “They don’t seem realistic.”  Nothing is real, it would seem, when you don’t really touch someone.

Things are a challenge for him, internally, but the compulsion overrides all.  Then his sister, Sissy (Mulligan) comes to visit and things get a bit more realistic.  His view of women as objects is countered by her allowing herself to be objectified by his boss, who is married with children.  This turns his shame spiral into a tornado.  Then she catches him in the act of…well, just doing what he always does.

Meanwhile, that girl from work, Marianne (Beharie) she’s a real person, who is separated from her husband.  She has a sense of his want, but no real clue how different his wiring is compared to hers.  Then his wires get…crossed.  Because he sees her differently.

Fassbender and Mulligan have an absolutely volatile chemistry that is hard to describe.  It’s sad, angry, devastating, passionate and recalcitrant.  Their past binds them together but only in, well, shame.

There are plenty of reasons that this movie received it’s NC-17 rating, but not one of them derives from a place that even approaches joy.  Fassbender’s performance is note perfect, as he encapsulates every definition of the title.  The performance is matched by the tone of the film given by McQueen.  This is something that could have come out of the 1970’s, when movies really started exploring the depths of humanity.

Is there redemption in watching a film like this?  One can assume so.  It really depends on if he gets off the train.  Either way, films like this can only be viewed once, unless of course you are part of the tale, being spun out of control.