Skip to content
Friends with Kids: I’m pretty sure they’re cooler than we are
3 Stars

Friends with Kids: I’m pretty sure they’re cooler than we are 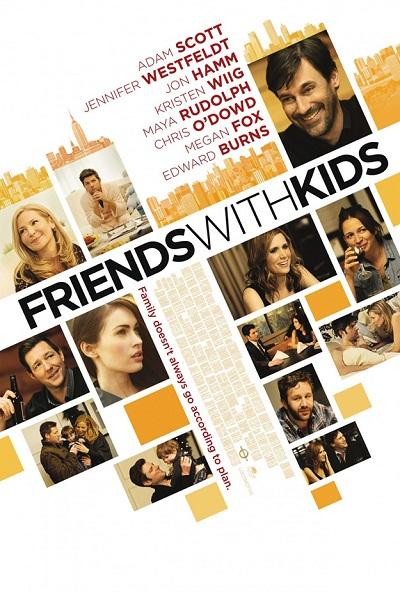 From the moment the camera starts, we are treated to a cover of the book, The God Delusion, by Richard Dawkins.  That’s life in the big city.  You get the hippest book about how the mindless millions live with their faith in God.  The phone rings and the voice on the other end of the line offers up a version of “Death is not an option,” only this time death is the only option.  The choice is how.  The two on the phone are obviously meant to be together, but for purposes of the story we are forced to see their denials, with exhibits 1 and 2 being the other people in their beds.  These stubborn destined to be lovers, Jason (Scott) and Julie (Westfeldt) are analytical and, you know, deep.

Soon after we are treated to the non couple meeting up with 2 other couples about to embark on a great adventure.  This adventure is, of course, having kids.  The first view for both couples with their children comes 4 years later.  The sight is so off-putting, it sets our thinkers back a tad.  They think their way through it and eventually come to the logical conclusion that they, too, should embark on this journey but in a totally platonic way.  Yeah, I am not kidding.

The other couples are struggling, but pushing through.  Leslie (Rudolph) and Alex (O’Dowd) along with Missy (Wiig) and Ben (Hamm) think that their plan is doomed, even with their own suffering marriages.  Little do they know this is a romantic comedy.

The thing about Friends with Kids is that these two are the kind of people George or Elaine would have dated on Seinfeld.  They are a punchline, but this movie takes them dead serious.  The only option is how the illusion dies and when they end up together.

That said, the movie is remarkably laid back and well acted where the script does not take them out of it.  Rudolph and O’Dowd are especially resonant.  Westfeldt has a remarkable appeal as an actress and director.  That these people are cooler than others is because the script gives them plenty of one liners about how bad Republicans are and how enlightened the protagonists and their friends are.  There are moments that ring true and these people, while somewhat cloying, are within the realm of believability.

Overall, the vehicle, while unique, is somewhat irresponsible.  The kid as a prop for the romantic comedy is much easier to handle on paper, to be sure.  Exploding diapers happen about as often as the well-timed run across town to Brooklyn saving the love of your life.  It takes more than a dinnertime conversation among friends over drinks and a plate of decorative pine cones to address the “unconventional parenting” effects on children.  This debate is worth more than a subplot, even if it is well thought out.  Life needs to be lived from the heart, not just the head.

Even with these reservations, the film is eminently watchable.  Thinking of it as an exercise of your romantic comedy muscles, kind of like a Statham movie does for the action reflex.  At least by the end of the movie the hipster takes the time to ask what the special occasion is when another couple takes their kids to the restaurant.