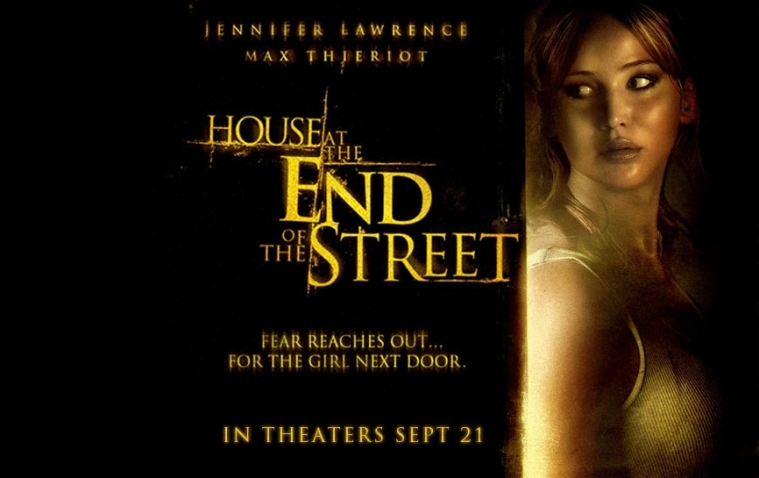 Why do we go back to films like this?  It’s finished by the time you’ve reached the second act.  By finished, I mean clearly obvious what is going to happen.  From that point, the only true enjoyment one gets is in watching Jennifer Lawrence turn a bland script into a bland script plus Jennifer Lawrence.  And try to limit your gaze to her eyes.

The story in a paragraph…okay, three sentences.  Kid murders parents.  A few years later another kid moves next door.  Someone still lives in the house where the murders took place.

How is there someone still in the house?  Why wasn’t the house vacated?  What would draw our heroine to the creepy house?  The script, of course, silly…

Elisabeth Shue is one of my all time favorite actresses.  I have had a crush on her since I first saw her as Ali Mills in the original Karate Kid.  An actress with beauty, pluck and resilience, she even had the presence to be able to carry the deliberately awful Piranha remake towards respectability.  To this point, I can’t recall her being wasted in a film, other than her cameos in the last two Back to the Future films.  She’s done bad movies, but she’s always been good in them.

In this film, she is wretchedly inept.  She is a mom who somehow neglected her daughter (Lawrence) for many years while the father was gone from the picture nine months out of each year doing rock tours.  The real crime, according to her daughter, is the divorce.  Shue’s character gives credence to the daughter’s complaints, and then generally spends the rest of the film being gone what her daughter spends time with the creepy person next door.

As Elissa, Jennifer Lawrence is in a movie that a young actress might make when starting a new career.  After being nominated for Oscars in 2 of the last 3 years, we aren’t going to see her do a film like this again.  That it was made in 2010 lends even more backing to this idea.  She radiates more from her character than many others who won’t be nominated for any awards ever do.  This may be due to the absolute black hole of charisma known as Max Thieriot.  The only vibe he gives is someone who might kick the cat accidentally while he sleeps.

Watch this movie knowing you will be bored.  Unless, of course, you enjoy television shows like Pretty Little Liars or True Blood.  Then you should be used to the lack of feeling.