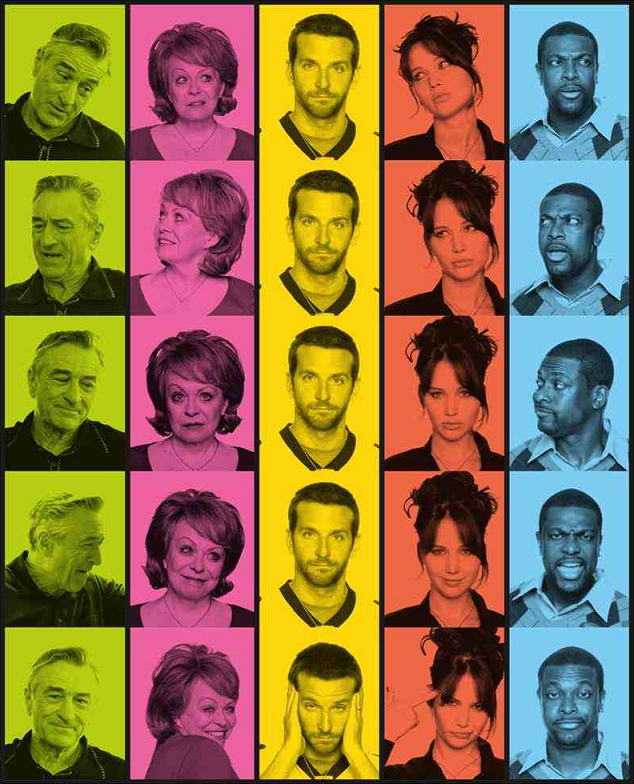 Pat: How old are you?
Tiffany: Old enough to have a marriage end and not wind up in a mental hospital.

I can’t be serious about this film.  The movie is incredibly funny, and it deals with some really serious stuff.

“Why,” my wife grins and asks early on, in the relationship between Pat (Cooper) and Tiffany (Lawrence), “Would you set your sister up with someone who is so deranged?”

Unsurprisingly, I had no wisdom to give, “Well, maybe it’s because the sister is a nut…”

My wife then looked at me quizzically, looked back to the screen and laughed once more.

Tiffany: I was a big slut, but I’m not any more. There’s always going to be a part of me that’s sloppy and dirty, but I like that. With all the other parts of myself. Can you say the same about yourself fucker? Can you forgive? Are you any good at that?

The conversations between Pat and Tiffany, in their cadence and vocabulary, are unlike anything we have heard in recent memory.  They go all the places anyone who’s ever loved and lost might want to go.  And then they change their mind.  In the midst of the lunacy, we are gifted with the most unlikely of romances.  It’s so unlike anything else in the field of romantic comedy, it deserves to be remembered.

Pat is on his way back after a brief stint in a mental health facility.  His wife’s infidelity led to a breakdown that left her suitor in a hospital and Pat diagnosed with a bipolar disorder.  The thing is, some of the things that he notices, like the positioning of the pictures of he and his brother, are things that anyone might notice.  Or, maybe it’s just me.

He is introduced to Tiffany, the sister-in-law of his friend.  She lost her husband recently, and her job even more recently.  Their introduction acts as a powder keg, with the potential to destroy a lot of lives.  So, of course it works.

Pat Sr.: Yeah have Ernest Hemingway call us and apologize to us too.

Joining Pat and Tiffany in their journey is Pat Sr. (DeNiro), whose OCD tendencies have caused issues for Pat’s poor mother Dolores (Weaver) long before Pat had his breakdown.  Pat Sr. gave all the attention to his older brother.  He knew his younger son had problems all along, but who the hell knows how to deal with that, especially when he has issues of his own?

Dolores spends most of her time trying to negotiate between father and son.  Their lives are a whirlwind that swallows her up and pushes her to the side.  She gives it everything she’s got.  That is not even close to enough, and she knows it.  She knows what normal is, and she wants everyone to meet her there.  Instead, they drag her ass over to the other side.

Then there is an assortment of Eagles fans.  All of them nuts, including his therapist.

Tiffany: Humanity is just nasty and there’s no silver lining.

The basic components to the film are as contrived as any comedy:

Will they get together?

Will the Eagles win?

Will they make the big dance?

The glory of Silver Linings Playbook is how the acting and script color the basic premise and make it an original masterpiece.  Cooper and Lawrence elevate their game to an incredible height, more than a match for DeNiro and Weaver.  More importantly, they are perfectly matched on screen, living out a chemistry that is visceral, funny and scary as hell.

DeNiro is back to acting, after many movies that made money but squandered his talent.  Weaver shows that Animal Kingdom was no fluke. Even Chris Tucker, making a return after a 5 year absence in which no one missed him doing Rush Hour movies, makes an indelible mark. His talent for handling Russell’s dialogue like a master linguist and still making him human is a pleasant surprise.

The ending is a wonderful, real performance that is even better because it is feels real. Imagine, a romantic comedy about insanity that is better than all the straight films out there. David O. Russell has never been considered a stabler director, but skilled work like this is almost impossible to find.

“I like this,” my wife says as tears escape her eyes, “I can understand now why it won so many awards.”

It won my wife’s approval, and that’s even harder to do.