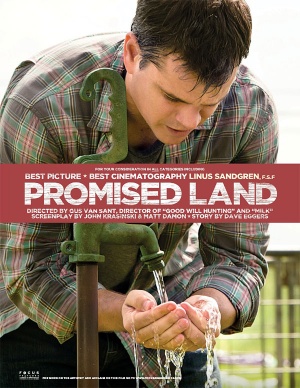 Promised Land is perhaps the laziest script I have seen make it to the big screen.  It takes a debatable subject, bends one side, to make it seem ill-informed and something to be questioned, and then it answers those questions with pictures of dead cows and old MIT engineering grads who teach high school in small towns during their retirement.  Who’s going to argue with dear old Hal Holbrook, or Jim from The Office?

On the side of ignorance and greed, we have Matt Damon and Frances McDormand, a couple of left-wing heavy hitters.  They sweep into town, use intimidation, guile and just plain lies to go into small towns and buy off properties for purposes of Fracking, which is a swear word in Battlestar Galactica.  Damon’s character is just waiting to be converted, he only needs to be embarrassed and frustrated into realizing that everything he is doing could hurt the people of each Mayberry type town they are coming to take over.  The pair of corporate Global bad guys are played in a folksy manner, worried about the size of horses they drive by and playing drinking games that get free rounds for the town.

The men in white hats, Krasinski and Holbrook, do what they do.  Krasinski plays a character named Dustin, but he might as well be called Jim, because, for purposes of this film, Damon is Dwight.  Jim gives the local school children lessons (complete with fire!) about the dangerous mystery of fracking, while Damon struggles to lie to a yokel and undersell the value of his property.  That Damon and McDormand lack the understanding to figure out why they are losing the PR game, what is obvious is that it is because they lack the understanding of the side that they are trying to represent.  Then again, the script makes it apparent that they don’t really want to.

In the middle is the affections of Rosmarie DeWitt, the indie sweetheart who most small films use to give them someone cute and apparently intelligent.  She does her job here, standing in the middle and waiting to be convinced.  Titus Welliver’s character is a little better represented.  He’s a gun shop owner who takes a shine to McDormand, because the script tells him to.  Welliver is just more convincing than DeWitt, but it really is quibbling.

The problem with this film is that it professes that more questions need to be asked.  In almost the next breath, they attempt to answer them, in a way representative of those who thought the world was flat.  The only counter to this lazy assessment is to make the other side look lazier and give it a scary name like Global Solutions.

For those who think its not possible for Van Sant to make a bad team, my first word to you is Psycho.  I follow this with the first gymnasium scene.  It was horribly written for the Holbrook ‘we need to ask more questions / we vote no’ routine.  Just when it is about to get contentious, and Matt Damon’s character is apparently struggling hard, the basketball team shows up for practice.  My questions are two: why did they schedule this meeting before basketball practice, which is almost always right after school?  How did Holbrook arrange to have everyone stand up with him at once, when only he spoke out against it?

I don’t know anything about fracking.  I know that it, like farm subsidies, dependence on foreign oil, and the war on terror, needs to be questioned.  Van Sant, Damon, Krasinski and company give you their take here.  Stay in Europe.  Don’t sail too far.  You might float right off the edge of the world.  I still don’t know what the effects of fracking are, but I know they think it is bad.