Skip to content
Side Effects is full frontal storytelling
3.5 Stars

Side Effects is full frontal storytelling 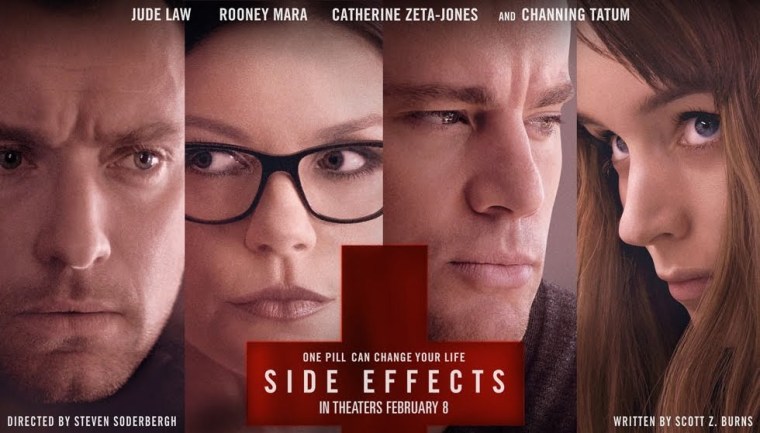 There is a propulsive feeling to the first 1/3 of Side Effects.   It’s a little like we’re heading towards inevitable disaster.  Once disaster strikes, the viewer is somewhat shocked, and like Dr. Jonathan Banks (Law) we stumble forward, thinking we can unwind the entanglements and bring on a peaceful resolution.  Through this time, Soderbergh, Screenwriter Burns and the cast are all in top form.  The possibilities are many and the tension is high.  It’s hard to tell if we are watching a film about the risks in testing experimental drugs, the descent of an innocent soul into madness or something more sinister.

Rooney Mara’s Emily Taylor has the appearance of someone who is standing feebly staring into the mouth of madness.  She’s waited for her husband Martin (Tatum) to be let out of prison, and she dutifully listens to his plans for a new business proposition to get out of the mire they’ve slipped into.  Interrupting these plans are her two apparent suicide attempts.  Now it is Martin’s turn to play the supporter, which he does, with half a mind still on his plans.

After the first attempt, we see her assigned Psychiatrist Banks move into the picture.  He puts a concerted effort into his patients recovery, but Soderbergh’s direction is selective enough that one cannot be sure if the effort is too excessive.  If he seems a little too innocent to the potential dangers of experimental medicine, he does not shy away from responsibility.

It is around the time things go haywire that things begin to change for the viewer.  We stop being told what might be happening, and start seeing a narrowing of the scope to what is happening without a doubt.  The viewer’s experience is limited to mostly Banks at this point, and we’re not allowed to wonder why someone who dealt with her before the incident would be allowed to be her exclusive access afterword.

Nonetheless, we follow Banks on his journey to uncover what is happening before he loses his partners, his practice and his family.  For a while, the ride holds our interest.  Law and Mara are exceptionally engaging, while Tatum and Shaw are exceptional in limited roles.  Only Zeta-Jones seems over matched here.  She gets no breaks from the script, however.

Eventually though, the story stops giving the viewer possibilities and goes with the most cynical and highly improbable avenue.  As we get to the place where there can be only one answer, our minds start picking apart the weaknesses in the script.  The worst thing one can do is give a bored viewer time to over analyze the mechanics of the story.  This is something Soderbergh knows, from his earlier successes in Out of Sight, The Limey, Contagion or Traffic.  That 3 of the 4 films mentioned were released before 2001 is indicative of something.

Soderbergh has flirted with the idea of retiring for a few years now.  His films have continued to be good and somewhat challenging.  If they fall a little short, like this one, perhaps it is a sign that he may need a break.  He’s toned down the retirement talk to that of taking a sabbatical.  Either way, he’s still interesting enough for this viewer to take a shot at his future works.  One would have little to complain of if he were to slow down to less than one film a year, though.