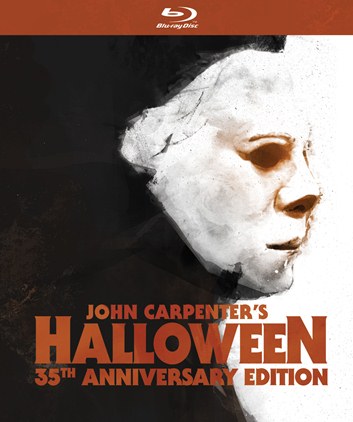 The Shape.  The Innocence.  The piano score.  The lens that showed the danger just out of focus, and then in focus.  Just for a second.  The leaves that blow in, almost in rhythm with the score.  The tilting of the head, looking as a dog might gaze in curiosity at a plaything.  Donald Pleasence as Dr. Sam Loomis, a doctor on a quest to find a soulless bogeyman, so obsessed as to almost have lost his own soul in the process.  The list of things that make this film one of the best horror films ever could go on indefinitely.  These same things move through the memories of those who have seen it, giving rise to nightmares and an obsession to discover just what it is that lurks behind that disfigured William Shatner mask. 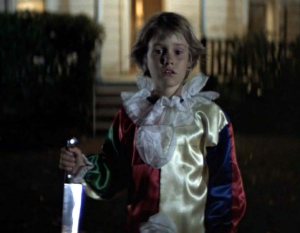 The best look we get at Michael Myers is at the end of the opening scene, a hauntingly beautiful shot that moves away from the vacant eyes of a little boy who just killed his sister.  The next thing we know, it’s 20 years later and Dr. Loomis is on his way to bring Michael to a court hearing.  He fought at first to get the boy out, and then spent the rest of his time trying to keep the monster he became in.

If he stayed in the nut house, they would not have the tag line “The Night He Came Home.”  Of course Michael gets out and makes his way back to Haddonfield, Illinois.  Waiting for him there, unaware, are 3 teenage girls (Curtis, Soles, Stephens)  who think it’s going to be another Halloween.  They will find out differently.

The most honest way to discuss Halloween is to share the effect it has had on my life.  I first watched it when I was 8 years old and it came on HBO for the first time.  As with many movies I should not have watched at the time, I would sit in the corner of our upstairs living room as my father and brothers watched.  The girls were either sewing downstairs, in another room or in bed.  Mom was usually sewing downstairs herself.

From my little corner, strategically placed outside of my fathers field of vision, I would hunker down and stare.  Once in a while, Mom would come upstairs for a moment, either because she needed to get something or by some instinct that her youngest was being corrupted.

“Bill,” she would say, “I don’t think he should be watching this.”

“You heard her,” my father said, not taking his eyes from the television.

None of my older brothers would even blink.  I would get up, and head to my room until I heard Mom’s footsteps going down the stairs.  Then I would sneak back to my same spot, until the next time Mom came upstairs.

It’s not that my mother was overbearing.  It wasn’t that my father didn’t care.   Once I saw Halloween, and then Alien, I was sunk.  As much as Star Wars had won me over, the other two films did, too.  I repeated this method for a lot of forgettable films after Halloween.  I never forgot Halloween.  Eventually, my brother Steve got a black and white television, and I then got to watch movies without interruption by concerned parents, provided my older brother felt charitable that day.  Black and white just made it more haunting.

The more I watched Michael Myers, the more I became transfixed with the blank stare creeping in from just off-screen.  Many nightmares have been filled with Myers stalking me in the same, determined pace that he does in the classic.  The strangest place he followed me in my dreams was my church, St. Stephen, The Martyr.  Long, concrete stairways and giant doors, even the power of God could not impel The Shape in my dreams.  It was clear to me at this point: Myers was part of me.

Years of gory sequels some with loose (or even non-existent, when it came to III) connection to the original came and went.  There was even a decent re-imagining by Rob Zombie, which was unfortunately followed by the second worst movie of the series.  I went to each one of them, and tried like hell to make it fit that place of fear where the original resided in my psyche.  Invariably, I was drawn away from those loudly obnoxious films and brought back to the eerie silence, long lens and lingering stare of the original.  I have spent many hours with Laurie as she enters the Wallace home, lingering on the first floor, trying to figure out if her friends are playing a joke on her, knowing that they are probably not.

John Carpenter’s methods employed in creating the world that is Haddonfield, Halloween night are the source of legend.  In only his third film, he showed the skill of a master with the budget of a peasant.  Composing the soundtrack himself, and working with the entire staff to set up the scenes and create genuine low-budget effects.  His work with cinematographer Dean Cundey (Back to the Future, Who Framed Roger Rabbit?, Jurassic Park) utilizing the panaglide they developed is second to none.  Carpenter made some good movies since (Starman, Big Trouble in Little China, In The Mouth of Madness), but the closest he came to a classic since Halloween is The Thing.

There are many versions of this film on VCR and DVD and I have owned most of them.  The collector’s edition 2 disc set in 1999 was the first (and so far only) to have the full television edition included.  It was released in 2007 as on Blu Ray, but since I had bought the 25th Anniversary dvd in 2003 and it had the same commentary and documentaries, I waited until the one they released this year.  Cundey supervised the high-definition transfer, and it is incredibly well-developed.  Michael Myer’s emergence from the shadows has never been so effective.

There is a doc The Night She Came Home covering Jamie Lee Curtis’ only time presenting at a convention.  It’s a once in a lifetime event for her, but one can tell there are too many people who attend these kinds of things all too often.  It’s kind of funny to see her dance around trying to say how much fun she is having while simultaneously explaining this is for charity and there is no way she will be doing this type of thing again.  Her energy is good, carrying her past her allotted time with a smile on her face and genuine gratitude in her eyes.  Filmed in part by her sister, Kelly, it also provides an opportunity for one to see many of those who have starred in Halloween pictures then and since.

Another doc is a repeat of the Back to Haddonfield 25 years later.  This is a decent 10 minutes to spend looking at the homes (made in modern day Pasedena) featured in the film.  Most interesting is seeing P.J. Soles with her teenage daughter walking up to the now fenced yard of the Wallace home, where she met her demise in the film.

The best thing, after the digital transfer, about the 35th Anniversary Edition of Halloween is the commentary track by Curtis and Carpenter.  Curtis’ fears come across as genuinely excited.  It really seems like she has made a life avoiding horror films since the last of the spate she made at the start of her career.  Hearing her describe Terror Train and Prom Night as ‘Canadian films with the token 2 Americans’ is humorous.  Her vantage point is interesting and it brings a good understanding to her motivations.  Curtis reservation about kids in horror films makes it a little more understandable why she would fail to appear in 4, 5 and 6, all of which featured one or more kids running for their life from the faceless terror.

John Carpenter’s counterpoint to Jamie Lee’s terror makes both a little extreme: she overstimulated and he underwhelmed.  Eventually though, it comes across that she not only avoided starring in them, but does not watch them either.  He decides to develop a strategy to get her caught up.  Similarly, Carpenter clearly did not intend for his original classic to move past the first film, and he delicately elucidates his reluctance to venture into the future films here.

If you have to own one copy of this film, I suppose that this should be it.  I own 3 different versions and will not be ridding myself of any of them.  The 25th Anniversary one is worth it just for Debra Hill’s contributions captured before her passing in 2005.  This is a landmark film: one of the 10 best films this reviewer has ever experienced.  It should be experienced by everyone who ever desires the thrill of genuine fear.