Skip to content
I Don’t Have A Vote: 86th Oscars…feel the excitement
Essays

I Don’t Have A Vote: 86th Oscars…feel the excitement

The 86th Annual Oscars – Try to stay awake My excitement for the Oscars has never been more quaint.  I enjoy the spectacle, but more often than not find myself […] 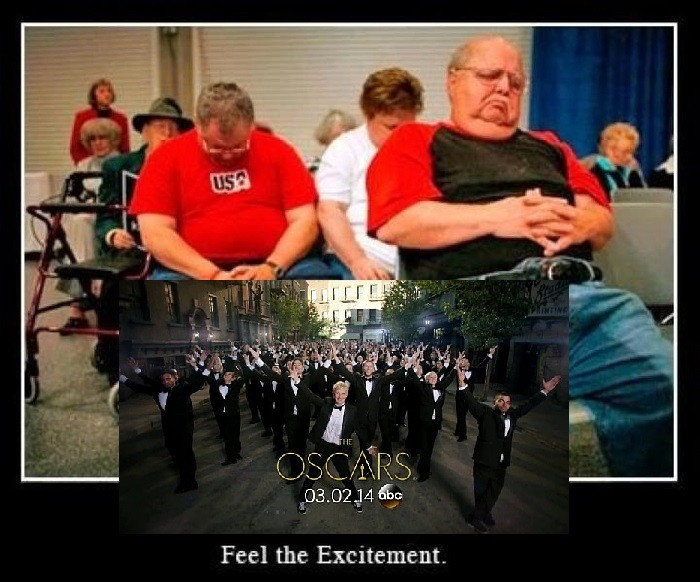 My excitement for the Oscars has never been more quaint.  I enjoy the spectacle, but more often than not find myself astounded at who is nominated (Gravity? Really?  For anything more than technical?) and who is not (The Great Gatsby?  Really?  For only technical?).  This year I was given the gift of my fellow blogger WeMissE’s perspective on the Oscars.  He very thoroughly covers the event in his article, leaving me the freedom to give my version of Siskel and Ebert’s If We Picked the Oscars.

My short list of who should have won, regardless of nomination:

Film: The Great Gatsby
Director: Baz Luhrman – The Great Gatsby It’s more than a spectacle.  It’s more than music.  It’s more than a great book.  Luhrman knew this, and apparently not many others felt the same way.  His reputation with good, but not great films like Moulin Rouge and Romeo + Juliet precede him to the point where most only see the same this time.  It’s too bad.
Actor: Will Forte – Nebraska I know the storyline is supposed to go with the old guy on this one.  Problem is, Forte did the lion’s share of the brilliant work in this understated – some might say boring – update on The Straight Story where the old man needs to get somewhere.  Forte’s gentle spirit lifts this story from observational sad humor to a ray of hope for humanity.
Actress: Mia Wasikowska – Stoker – The power of her performance is in the subtle combination of being haunted and playful.  I often enjoy Wasikowska, but this role is her best.
Supporting Actor: Joel Edgerton – The Great Gatsby – Narrowly beating out Bill Nighy’s measured performance in About Time, Edgerton’s Tom Buchanan is the highlight to an exceptional cast.  He should win for the confrontation with Jay Gatsby alone.  I will never think of ice chips on a hot day in the same way.
Supporting Actress: June Squibb – Nebraska This is one time that the Academy got it right.  June Squibb’s role as nagging wife goes from obnoxious to multi-dimensional brilliance in a minimal amount of screen time.
Original Screenplay: Mud – Jeff Nichols – Film after film, Nichols brings words to the screen better than anyone.
Adapted Screenplay: Luhrman and Craig Pearce The Great Gatsby – Luhrman and Pearce take everything that works from the classic and makes it relevant for all time.
Animated Feature: Frozen – Finally, an animated Princess film where the heroine (or in this case, two) is not beholden to a man.  This alone makes this the best Disney Princess film ever.
Best Original Song: “Young and Beautiful” Lana Del Rey, The Great Gatsby – “Let It Go” is a great vocal and a wonderful song, but Del Rey’s song is a remarkably moving dedication to everything that no one understands.

The show will be big, and I am sure something about the holocaust will win.  Meryl Streep will not, but don’t worry, she’ll be nominated again next year.  So will Woody Allen, unfortunately.  That’s Hollywood.  Feel the excitement.