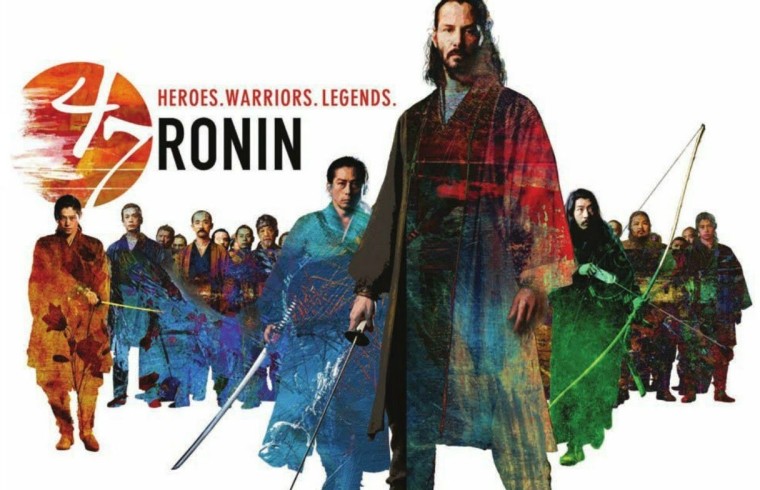 The late Sam Kinison had a routine regarding Jim and Tammy Faye Baker’s take on Christianity in which he, as the voice of God, feigns a search through the pages of the Bible, saying aloud to himself “Where did I say build a waterslide?”  Movies based on legend often seem to have the same very loose connection to the source.  As they say in the beginning of the film, to know the story of the 47 Ronin, is to know the story of all Japan.  This story, put very simply, amounts to a grudge between two daimyo, where one (Kira), essentially, called the other (Naganori) “country,” and the insulted one took offense.  This lead to disgrace for afore-mentioned bumpkin, which lead to his honorable suicide and his samurai warriors becoming leaderless, also known as ronin.  The aggrieved warriors seek revenge, but whether they get it depends on one’s point of view.

Nowhere in this legend are there mentioned demon half-breeds, witches, ogres and antlered beasts with several rows of eyes.  There is no mention of the Tengu forest, for that matter, but without this, we wouldn’t have Keanu Reeves to kick around and, eventually save the day.  As Kai, a half-British, half-Japanese boy turned to humble man, it’s Reeve’s job to take crap from the good guys, until they are outsmarted by the bad guys, and then help the good guys redeem themselves.  The good Naganori’s daughter Mika takes a liking to Kai, but so does the Kira.

After insulting her honor in front of her father, Kira begs forgiveness and a chance to make up for this slight.  What he’s really asking for is time for his witch Mizuki to work in a plot to dishonor Naganori, which brings about the fateful chain of events.  Afterwords, the domain becomes Kira and the samurai become stained in disgrace.

This is where Oishi (Sanada), who was second in command for Naganori, moves up to second billing.  He endures a year of punishment literally being thrown into a well, and then he starts planning revenge.  Oishi is blinded when he needs to be, honorable always, and smart enough to realize that his name is not on the tip of the bill.  When the time comes, he picks up Kai, who is living as some sort of imprisoned gladiator, and collects all of his old ronin pals and they plot a revenge.

The first thing that drew me to this, the fifth filmed version of the story, was the prospect of seeing Reeves playing someone who, like himself, is half-white and half-Japanese.  Regardless of whether this was actually part of the story, someone trapped between two worlds would be an interesting vantage to say the least.  His performance is the same kind of  deer in the headlights one might expect at first.  When the year goes by and he spends the time honing his skills, he rejoins the domain with more confidence.  There is a genuine change in demeanor which is welcome.

Sanada was another draw for me.  I enjoyed him immensely for the short time period he was in Lost, and wished that his role could have been more substantial and less foolish there and in The Wolverine.  He must have the face of someone who finds out the truth a little too late, because it happens here, too.  He gets to spend the latter half of the film making good decisions, my favorite being the one he makes in the cave in the Tengu forest, which is reminiscent of Yoda’s challenge to Luke on Dagobah.

Shibasaki, as Mika, is given the story’s weakest role as, essentially, a damsel in distress.  Her helplessness is off-putting and somewhat annoying, given Reeves’ character’s obligation to be in love with her.  There is no chemistry there, and it is unsurprising.

The high points to the movie don’t involve effects.  Scenes where there is straight up fighting with no Harryhausen looking ogres, unreal beasts or mystical dragons are more comical than interesting.  In all this time since Terminator 2, it’s harder than ever to make the unreal seem real.  The best moments happen when it is tied to character development of some sort, to make up for the skill that is lacking.  This is Rinsch’s first feature film.  Although much of the budget was wasted on delays, reshoots and close-ups, it’s still hard to believe that they gave this much money to a first time director.  It may have been more successful had they concentrated more on story and less on the same crappy computer effects that we get in so many other films.

How much one likes this film will probably depend on what they expect from a film.  If you want storytelling, this one is half the way there.  If you want acting, it’s not quite that far.  If you want visual effects, you have them, however unnecessary and poorly drawn.  If you want to see Keanu Reeves, or, in my case, Sanada, this is the film for you.