Skip to content
The Family: Not everything’s alright
3 Stars

The Family: Not everything’s alright 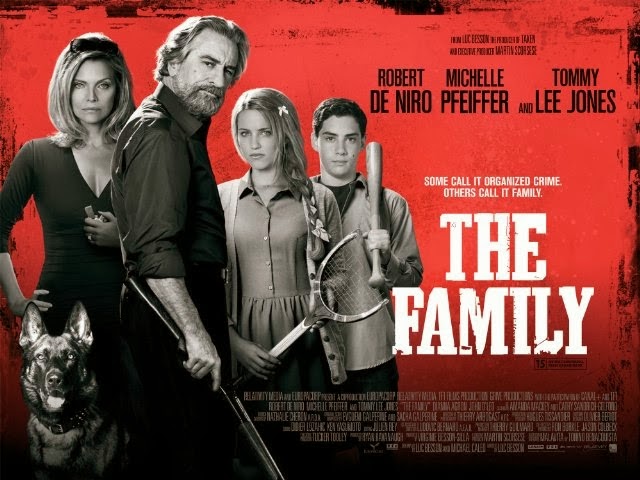 Fading are the days in which Robert DeNiro commanded the screen.  The script of The Family goes so far as to describe his use of the “F”-word at the expense of actually seeing him use it.  He does use it, of course, but not as compellingly as one would hear Dianna Agron tell it to us.  We get to see many moments of quick violence in The Family.  DeNiro’s Giovanni Manzoni is muted by his existence as a former mob boss and current witness for the state, so most of the violence we see him inflict is solely within his mind.  It happens too many time to be amusing.  The stuff he does for real does not match the effectiveness of seeing what the rest of his family can do.

Pfeiffer, as Manzoni’s wife Maggie, has a penchant for grocery stores.   Their daughter and son- Belle and Warren (Agron and D’Leo) – have their own challenges, handled in a somewhat logical, yet more likely pathological manner.  It’s difficult to imagine them learning the art of beating their enemies down in a healthy family environment.  Then, with so many ways to express with foul language, maybe I am missing something.  They all seem to communicate well and they never miss a meal…until one of them decides to run away and the other plays out a doomed love scenario.

It’s been a long time since Luc Besson made the classic action film Leon: The Professional.  I have been anxious for him to follow it up.  He’s been happy instead to push other, younger directors, writing their stories producing their franchises.  He’s also made a few animated films and there was The Fifth Element.  Nothing like Leon ever again graced the screen.  It still hasn’t.

Agron and D’Leo are immensely enjoyable as amiable siblings.  They appreciate more than they, perhaps love one another.  They understand that their goals are similar. While inconvenienced by their circumstances, they also appreciate what they have learned from their parents.  It’s no coincidence that they have the best moments in the story.  Their talents carry most of the load for The Family.

Pfeiffer would have been added to the list of load carriers had she not had an inexplicable breakdown in the 3rd act. The behaviour just did not suit the character as we have come to know her by then.  Perhaps it is something of the wish to show range, but even I would not have lain down for that fat guy in the last act.

There is a straightforward nature to The Family that is enjoyable, if unspectacular.  Besson has never been one for an over reliance on gloss.  So far, his career arc has not been what I have expected, but even so, he’s doing alright.  This film came out slightly ahead.  If he’s comfortable making comfortable films, it makes him a little like DeNiro’s character doing a Q&A about  Goodfellas.  It’s a reminder of what used to be, and what can be enjoyed again whenever one pushes play.