Big Hero 6 is better than its individual parts 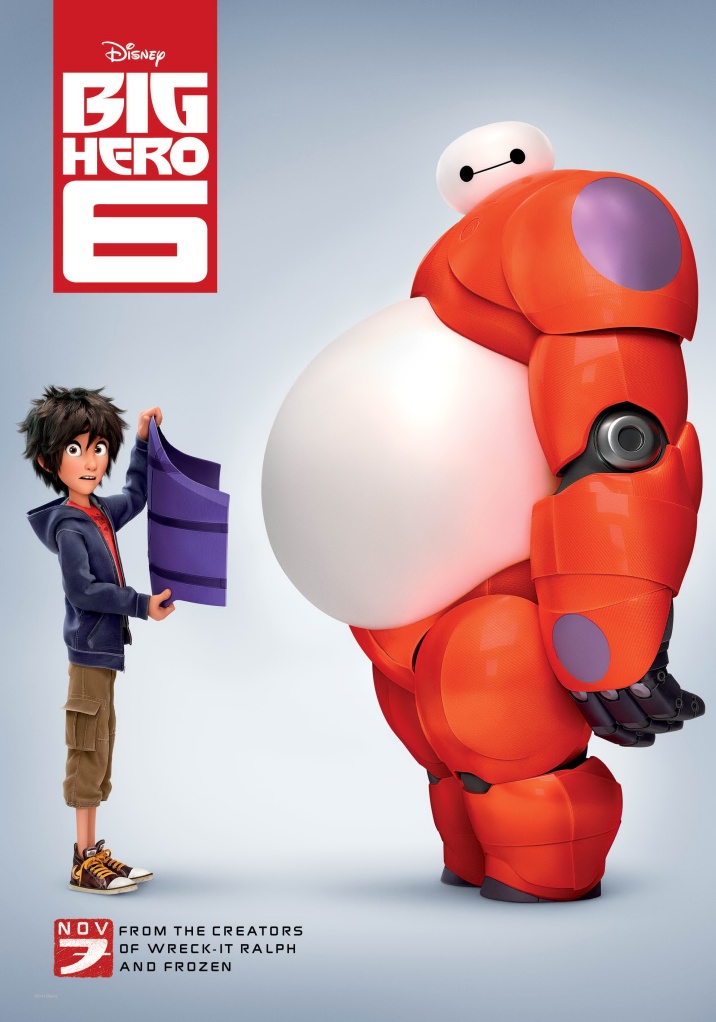 A Marvel property produced entirely by Disney, Big Hero 6 is a treasure in the cinematic universe for both companies. Using a completely original concept for a robot (vinyl exterior covering a metal skeleton), we see a caring nurturer, given a hard exterior to help a boy solve a mystery about the death of his brother. Hiro (Potter) is a brilliant 14-year-old, who graduated the year before. He has spent the time since then wandering the streets of San Fransokyo  hustling others in back alley robot fights. His brother Tadashi (Henney) pushes him into entering a contest to get into the robotics lab at his University. He gets in but almost immediately tragedy strikes, and his brother and his brother’s Professor Callaghan (Cromwell) are lost.

After the requisite doldrums, Hiro rediscovers his brother’s project, a medical assistance robot named Baymax. Through a clever twist in protocol, Hiro convinces Baymax to assist him in rediscovering his contest project, which leads him to a masked man, who has been producing more of the tiny robots that Hiro invented, but using them for his own means. Shortly afterwards, he meets up with Tadashi’s group of friends from the University. They each have some form of brilliance, except for Fred, who is about as annoying as any character played by T.J. Miller.

This is where the film took a turn in the positive for me. My thoughts in seeing the trailer were that we were going to see a boy and his hero kind of flick. To see instead an actual team of 6 heroes made things a little punchier and more enjoyable. It’s not that the five humans in this sextet do all that much, but they do all have their moments, which allows the viewer to get more enjoyment from the star of the picture, Baymax. His insertion into each scene feels like more of a genuine surprise than a labored necessity.

Baymax is the gentlest kind of superhero. His huggably soft exterior hides absolutely nothing. His programming has no tricks hiding sinister intentions. What you get is what Tadashi intended for Hiro to see. When Hiro messes around with his programming – bending it towards revenge – is the only time that things don’t work, and that is a great message to send to an audience raised on superhero vengeance stories.

The 3-D animation is remarkable. The deft touch gives Baymax the appearance of almost floating off of the ground and gives rise to some anxiousness when one hears the sound of a breeze. It’s like he might just float away at any time. The tiny robotics invented by Hiro give the viewer a sense of wonder, awe and then dread, when one sees how impossible they might be to stop en masse. It’s one of the most well thought out stories about inventions I have ever experienced. The characters are a lot simple, compared to the things they invent, but that is the price one must pay to have a film appeal to a wider range of audience, I guess. I did appreciate how Hiro’s character is forced to journey through loss and magic. It gives a good counterbalance to the one note characters that fill out the team. Scott Adsit’s dedication to his character’s soft heart really puts the film over the top, though. It really feels like we are seeing Hiro’s brother.

If you have a kid 3 or older, this is an ideal film. It works for anyone but the most cynical and even those would find plenty to like within the framework of the story. See it in theaters while you can.