Skip to content
The Purge: Anarchy (**) needs to improve if it wants to be the new Saw, Paranormal Activity
2 Stars

The Purge: Anarchy (**) needs to improve if it wants to be the new Saw, Paranormal Activity 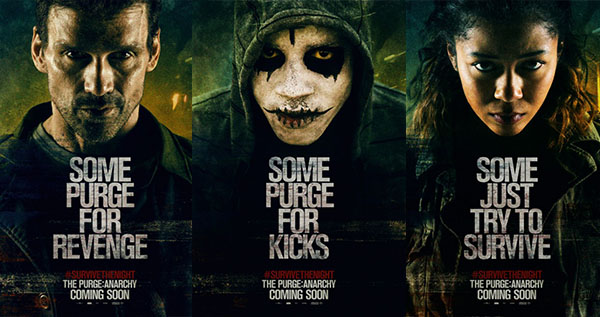 In the second take of the dystopian series, we go outside the confines of the home to the streets of L.A., where, presumably, no one is safe. This is especially true for the lower and working class people. It occurred to me that this makes it seem as if the high-class (aka Republicans) are the villains in these stories. The other day I heard the theory that Obama was granting amnesty to 11 million illegal immigrants to produce a permanent lower class, so I suppose he’s just filling up targets for future purges.

It’s difficult to treat The Purge: Anarchy as much in the way of a horror film, though, because there are no real elements of tension. There are shootouts and people cutting other people, but everyone’s paths intersect right when they need to, so there is no sense of desperation at all. We have 3 stories intersecting. There is a young couple on the verge of divorce driving across town. There is the honorable single working class mother who looks like she came right out of a politician’s anecdote. Then there is a guy out looking for revenge, armed to the hilt. When a roving band of purgers run into the low rent apartment buildings grabbing targets, and the fleeing young couple’s come across the path of the guy who is looking for revenge you can only guess what happens. That’s right: buddy comedy. Only without the friendship and the laughs.

This movie just goes from place to place, putting the targets in poorly imagined constraints and allowing them to get out. One guess what happens to one of the fighting couple when they decide to reconcile. There are heavy-duty semi-trucks that roll around the town mowing people down with high-tech Terminator 2 weapons. It turns out the rich folks don’t think we’re getting rid of enough riff-raff. The riff-raff has a voice, though, in the form of Michael K. Williams and his group. They show up on interrupted feeds and break up arena killing shows. The next movie is supposed to be a prequel revolving around this group. Too bad they weren’t made interesting enough to carry a film.

That hasn’t stopped them through two films so far. In comparing the minimal budget to the vast gross to each of the movies, it’s easy to see this routine going on for a while.