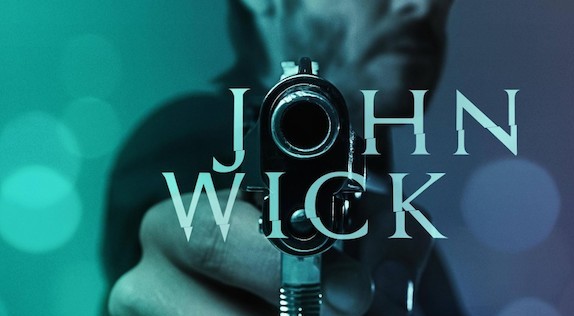 John Wick (Reeves) is a retired hitman / tough guy for the Russian Mob. He got out and nobody really wanted him back in. The Mob Boss’s Son, who amazingly had no clue who he was, makes the mistake of coveting his ’69 Mustang at the cost of his puppy Daisy. Thing is, this puppy was given to him by his recently deceased wife (Moynahan). So this puppy, Daisy, is kind of important. They killed the wrong puppy. So let the ass kicking begin.

This is really all the plot that is need to excuse an hour and a half of carefully choreographed carnage. Wick’s grief is carefully hidden in the wooden countenance of Reeves’ face, expressed only in swift moves and hailing gunfire. That there is nothing going in the character department is of no consequence. Clint Eastwood made a career of these types of films in Western form. The movement is fluid and the bad guys die painfully.

There is plenty of acting talent to go around in this one. Nyqvist has been a staple since The original Dragon Tattoo trilogy. His work here, is a shadow of that classic, not even comparing to his Mission Impossible: Ghost Protocol efforts. He does what he can with a “what ya gonna do” shrug and marches through to the inevitable conclusion. It’s a bummer when one realizes that no matter who is playing the bad guy, they aren’t going to make it.

Alfie Allen, who plays Theon Greyjoy in Game of Thrones, is a decent bag of slime. It says something when John Leguizamo won’t touch your stolen goods. Johnny’s looking quite dapper these days, even if he isn’t mid-card level. Willem DaFoe waits in the wings, a seemingly ambiguous hired gun. Ian McShane is an equally mysterious ombudsman of dark side ethics. Dean Winters, mayhem himself, doesn’t register as the bad guy #2.

Really though, none of these actors are given much to do, plot wise. They sit around and stew over the bad decisions of one and then, of course, compound that bad decision while waiting for the town to be painted red.

As the one applying the color, Reeves is a willing vessel. This movie is not intended to win any awards. He needs to live up to the heaping of praise by the characters who know of him expressed to those who are unaware of his talents. To that end, at about the 1/2 mark, they send the first wave of bodies his way to be slaughtered.

How people keep breaking into his house, I have not a clue. Perhaps it was the producers idea. He does not wast bullets, and he does not take chances. His moves, fancy as they seem, are more effective than Steven Segal in his prime. If this acting gig does not work out, maybe he too can pass secrets to MMA fighters. I get the feeling he’s going to be fine, though, if he keeps peppering his track record with sturdy fare like this. He should outlast Neeson by 20 years.

The film has class and it is fun. If one can get past Wick’s mounting injuries and seemingly endless capacity for recovery, it’s delightful to see him order dinner for 12. There is lots of nuance here. Plenty of rules. As long as the toughs stay within their rules, all is fair.