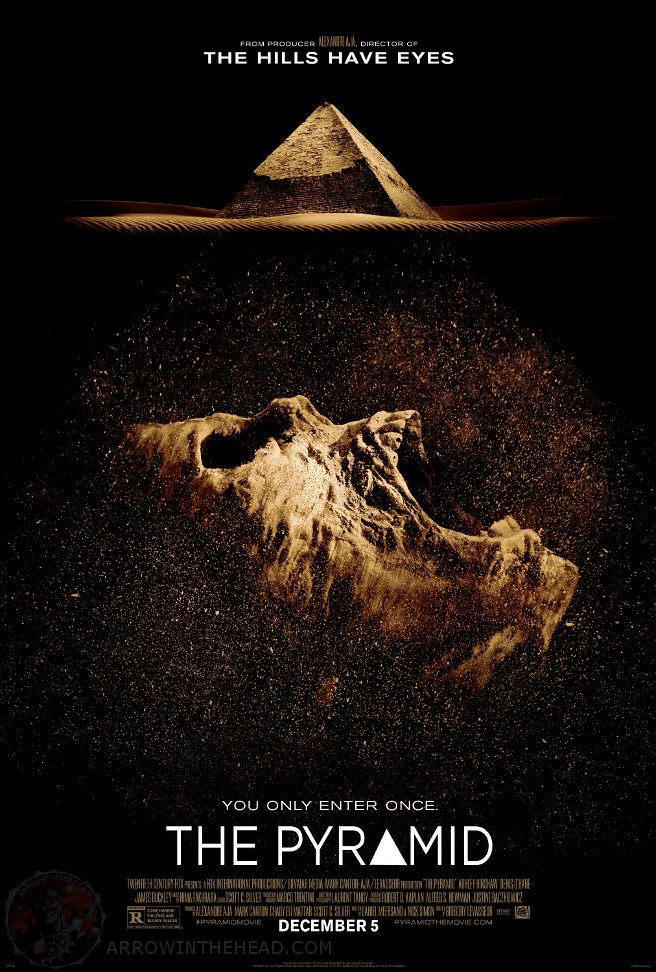 I think it’s the part where one guy holds the head of a girl who has been impaled and asks her “Is that better?” This is the moment of truth. Another 89 minutes down the drain. The very next corner, they are back to reading hieroglyphs. Then there’s that nasty bite mark. And Dr. Miles Holden’s (O’Hare) eyes aren’t looking real good. His daughter (Hinshaw) still looks alright for now.

A rare 3 sided pyramid is discovered and just after they find the entrance, they are told to go back. Of course this means go in now in movie terms. First they send a robot that looks like a cross between No. 5 and Wall-E. He doesn’t last long. In they go and down they go. And down, down, down to where, according to the camera man, it smells like feces. Although he doesn’t use that word.

The story alternates between maiming cast members and talking about ancient history that we have not heard before this movie. Only we have. Several times. How much do you wanna bet they weren’t the first ones here. Even though things are grabbing them from the shadows, they always like to take a few moments to peruse stuff that was written down by the Egyptians or the Masons.

There are neat little creatures that look like ancient cats run through a computer simulation and this really big thing that looks like an Anubis. And yes, he likes to use a scale. We hear about Osiris and Horus too. At least these guys have taken Pyramids 101. The Anubis seems impervious to bullets, but not flares. The closer you look, the more the inconsistent shadows and glossy finish start to show. The crappy computer effects are not up to the low bar of AVP: Requiem but its leagues better than that Mummy movie that starred The Rock.

If you kill the light, every thing looks alright.