God save the Queen and long live the Kingsmen. 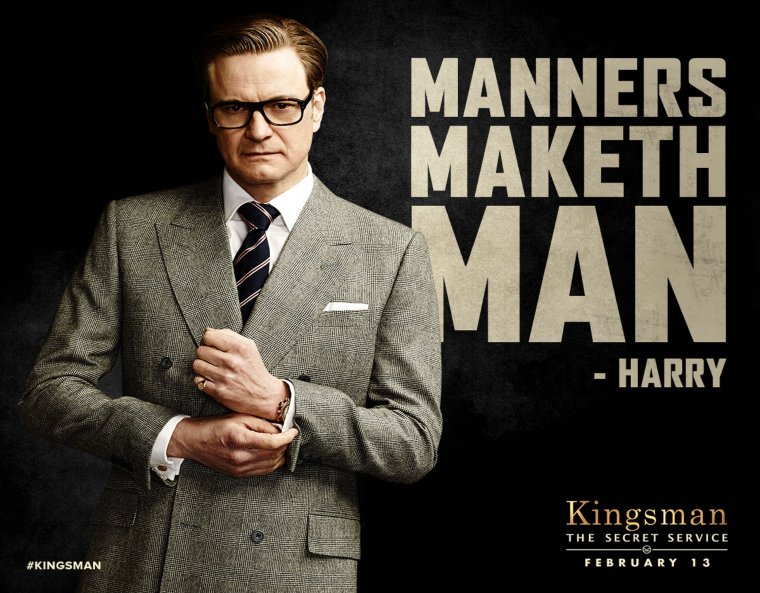 It’s getting to the point where it’s no fun to watch Mark Strong in movies. He’s only ever been a bad guy in so many of his films, but not even a memorable one. It was puzzling to see him in that commercial with Tom Hiddleston and Ben Kingsley about being an effective villain. He’s British. He does sound right. Never really thought about whether he had style. He always lost his power by the end of the movie, though. Seeing him in the first act makes one depressed about what can be expected in the third act.

The beauty about Kingsman: The Secret Service is that we get to see people outside of where we are used to seeing them. Strong, as Merlin, is a trainer of agents that work for a secret order. He’s callous and effective, but he’s not a villain. And thank the Lord, there’s no telling what will happen to him by the end of the story.

He’s not the only one playing against type either. Colin Firth is Harry Hart, also known as Galahad. He is an agent who made a mistake in 1997 that should have killed his whole team, were it not for the actions of Lee Unwin, who sacrificed himself to save the team. Years later, his son, “Eggsy” (Egerton) is heading nowhere fast when Firth comes to his aid, offering him the opportunity to, well, you can guess.

While he is training, he runs afoul of the other candidates, save one, Roxy (Cookson). It doesn’t take a genius to guess who graduates the class. While he is training, Harry discovers a nefarious plot to save the world from the scam known as climate change, global warming or whatever they are calling it this year.

Richmond Valentine (Jackson) is a billionaire philanthropist who has his own ideas on what it means to “help” out his fellow men. His plan is nothing you haven’t seen before, but Obama’s on board, so that is enough to make it a bad idea. His main henchwoman, Gazelle (Boutella) is as memorable a bad chick as I have seen since Xena Onatopp. Her skill is precision cutting and excellent dance moves.

Jackson, who always seems to know the right drink to go with the meal, is exceptional as the bad guy. He adopts a lisp for no particular reason and has a different color New York Yankee hat for each outfit. He embraces his peculiarity without seeming like a parody. It’s a tough balancing act, but Jackson plays it like he was born for it.

What would this film be, though, without Colin Firth. He’s had the debonair part down for a while now, but rarely has he played one so deadly as Galahad. Vaughn puts Harry in some wonderful scenarios to take advantage of the former while lending credence to the latter. For once we get to see him completely unhinged when taking on a church of Westboro Baptist types. It’s hard to tell if the scene is offensive or funny and exciting as hell.

Egerton is a somewhat mild presence as Eggsy. He is not the kind of action presence that screams to be noticed, but he gets off a cheeky line now and again. His training time with Harry is rather shorter than one would hope, but the time is well spent. A fair amount of this time is spent with Merlin at the school (and out). Roxy gets a lot of his attention, too, but not necessarily in the customary romantic way. Count that as one cliche not used. Hooray for the good guys.

Back to Clark, who is the best thing in the film. For once, his understated approach works well with the plot of the film. He is allowed to bloom quietly while others in the cast, particularly Jackson and in the end, Egerton, are exploding onscreen. This fine attention to detail makes an average story a good film.

Of Vaughn, it’s obvious the talent he has for character development, if not altogether original plot development. Starting at such a place of humility for Eggsy serves if they plan on expounding on his character in future films. The shift of focus away from an easy spy school romance is a good move, too, as it allows for better moments of mock-Bond humor later in the film, among other things.

Some of Vaughn’s best moves involve Valentine’s imaginings of a perfect world, including his selection of music with which to end the world (see below). The end really couldn’t come with a better sound. There are an equal number of jabs at liberal and conservative leanings, but it really is a nice touch to see the climate change movement get the kind of plot it deserves. To have such an obvious political scam being taken to such an insane extent belies the cynicism of a movement meant to keep money flowing to those who never stop making the emperor’s new clothes.

God save the Queen and long live the Kingsmen.