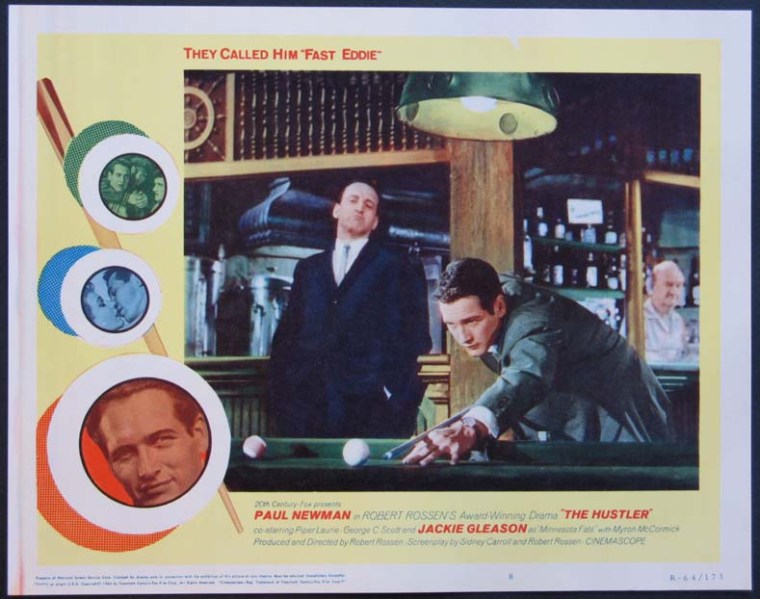 In an era where film was often an extension of the stage, The Hustler plays as exactly that. It is an exceptional meditation of the challenge of a man to overcome himself as his biggest obstacle. Paul Newman is “Fast” Eddie Felson, a young, hot-headed pool shark who is working a series of short cons with his partner Charlie (McCormick) across the country from Oakland to challenge the legendary champion “Minnesota Fats” (Gleason). After running up $18,000 over Fats, his hubris, ego and alcohol all get the best of him, eventually losing it all except for $200.

He leaves Charlie behind, heading to the local bus terminal, where he comes across Sarah (Laurie), a lame young drunkard, with whom he ends up staying. During his stay, he comes across Fats’ bankroller Bert Gordon (Scott), who tells him he is someone who looks for a way to lose, but he could come out ahead if he works for Gordon for a 25% stake. Eddie opts to go his own way at first. Events occur to change his mind, but that is only the beginning of his regret.

Fast Eddie: Maybe I’m not such a high-class piece of property right now. And a 25% slice of something big is better than a 100% slice of nothing.

Newman and Gleason are spectacular in their respective roles opposing one another at the pool table. It’s an amazing transition to see where Newman starts and ends. Contrast this with the somber sobriety on Gleason’s countenance, where essentially he has the same worn out look, but we understand it completely differently. Laurie is truly a wounded soul. It’s no accident that Sarah and Eddie end up with one another. Where it ends up is heartbreaking, but it, too, seems inevitable.

George C. Scott creates a unique twist on his intimidating self through the story’s evolution. He is a dangerous man, but the change in the last act is something that many actors would not feel comfortable portraying.

Rossen allows the first half of the film to build slowly, seeming somewhat conventional and perhaps even bordering on contrivance at times. Laurie’s character is a tough sell, though, given the limitations placed on female characters in the 60’s. Eddie’s counterpart Janelle shows as much depth in 10 minutes 25 years later. She prevails in a powerful third act, however, leaving an indelible impression on each character. His work with Oscar nominated (and future winner) editor Dede Allen is artful and daring, leaving the viewer with a rich landscape that is dark, isolated and seething with doubt.

Fast Eddie: Fat man, you shoot a great game of pool.
Minnesota Fats: So do you, Fast Eddie.

This is Newman and Gleason’s show, however. Strange thing is, they go about it in different ways. Newman grabs the screen in an almost Shatnerian manner. I know Shatner hadn’t hit it big at that time, but his was a stage acting style quite prevalent in the 50’s and 60’s for the flair of emotive responses to seemingly calm situations. Newman pulls it off, though, particularly in the strength of Eddie’s last matchup versus Fats. 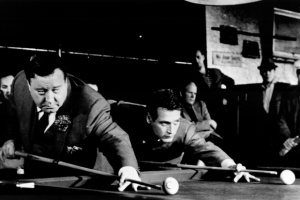 It would not have worked, however, were it not for the simmering soul of Fats provided by one of the biggest stars in the world at the time, Jackie Gleason. When watching Gleason work, get worked and working over Newman at first, he seems like a secret weapon. By the end of the story, once he somberly informs Felson that he better pay up, it’s clear he is a beaten man on more than just the table. He is a dog on a leash. It is really two sides of the mirror and a remarkable performance. It’s a spare performance that has a universe of depth just under the surface.

One wonders what might have happened had Scorsese opted to make The Color of Money closer to the story that Tevis had written for it. It is pretty certain that the ailing Gleason would not have been up for the role as written in the novel, what with going back on tour and all. The minimal role he presented was rejected by Gleason as “an afterthought.” In watching The Hustler, it’s clear that Gleason left Tevis’ best representation of the fictional pool legend on walking away from the table in the last frame.

Tevis’ work is finely represented here, and even if he has little overall influence on the follow-up, the framework for his wonderful central character is thoroughly improved upon in the Scorsese film. 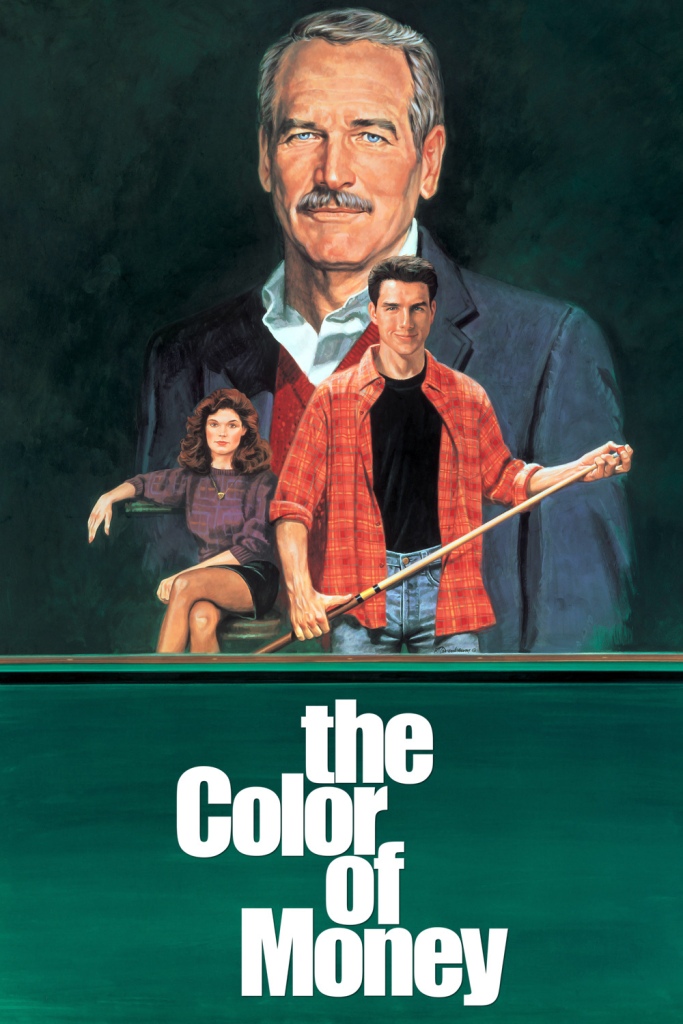 Everything that is good about The Hustler is made great in The Color of Money. The story continues 25 years later with Felson as a liquor distributor bankrolling a pool player (Turturro) on the side. After Vincent (Cruise) and Carmen (Mastrantonio) shut down his player, and Felson takes Vincent on as his stable horse. Things get off to a rocky start, and inevitably, he starts to feel the urge to try hustling for himself again.  His efforts to teach Carmen and Vincent the concept of the long con is agonizing for all parties. The addiction is so strong for Eddie, he treats every painful drawback as inspiration to go forward.

For a movie with so many bodies moving through it, the cast is remarkably concise. In many ways, The Color of Money plays more like a stage performance than the original. Gretchen Rennell brings in several actors at the top of their form. Helen Shaver plays Janelle, Eddie’s beautiful (and age appropriate) lover. She runs one of the bars he sells to, but sees a world beyond booze and billiards. Something with which her man struggles. Her eyes drink in the dreams that his words create, but her feet are solidly on the ground.

Tom Cruise, coming off the biggest film of his young career in Top Gun, is expanding his repertoire. In allowing himself to play the fool, he also is allowed the furthest room to grow. His performance would be easily dismissed if one does not absorb the conclusion. This film began a long string of movies in which his fame colored critical reception of his ability.

Eddie: Do you smell that?
Vincent: What, smoke?
Carmen: No, Money…

Mastrantonio is one of the great actresses of her generation. There has been a void in the film industry since she made her last film in 2004. Carmen is one of her signature characters. She is at once too much for Vincent and not enough for Eddie. Or is she? Only revealing the cards that she wants us to see, we see more in her depth in her character than any of the others. She is the closest correlation to Bert Gordon in this story. Eddie and Vincent concern one another with a game, and she plays them both while taking on the role of quiet woman in the background. There is no way she will ever reveal more than she must to either of them.

Eddie: Human moves, kid. You study the watch… while I study you.

In a career of incredible performances, this is Paul Newman’s finest. As little as Mastrantonio gives of Carmen’s true character, the opposite happens with Eddie. Newman lays it all out. As the story begins, it looks like he’s in charge. The story is a series of events that show how little he grasps any situation. By the end, he’s at ground level, but fully comprehends the gravity of his position in life. And he’s grateful for it. The show Newman puts on is brave and fully realized. It takes someone with the utmost confidence in who they are to give Eddie the depth required to fully connect with who he was in The Hustler. He’s not the same desperate and over-emotive young man he was before. You can tell that man is where he came from.

Even though 25 years is a long time, Newman, Scorsese and screenwriter Richard Price understand the concept that he is still the same basic person. He may be wise, but he’s still vulnerable. He’s not stuck either. That this didn’t amount to a series of straight betrayals and showdowns gives Newman the grist to show real development.

Eddie: It’s even, but it ain’t settled. Let’s settle it.

Scorsese moved from a career of personal projects into the mainstream with The Color of Money. His work with cinematographer Michael Ballhaus and editor Thelma Schoonmaker is invigorating and as tense as the original, even if it has an entirely different feel. It’s mixture of staccato jumps and drawn out torturous shots is a combination that is intentionally nerve-wracking. We’re never supposed to feel comfortable in this world.

The soundtrack, compiled and produced by Robbie Robertson, is an integral piece of the film. Robertson is a fine musician who had a stellar career scoring soundtracks (aside from his marvelous work with The Band). Only his work on Phenomenon approached anything this remarkable. Everyone remember’s Clapton’s It’s In The Way That You Use It. The first meetup with Grady Seasons (Robert Palmer’s Let Yourself In For It) is a great example, but the movie is filled with remarkable mood setters. Don Henley, Willie Dixon, Mark Knopfler, Warren Zevon and B.B. King all have exceptional tunes on the album. Even if Zevon’s Werewolves of London is from an earlier work, it totally fits with the work. Best of all is Robertson’s own compositions, Modern Blues and even more, The Main Title. The latter shows at once the depth, desperation and yearning of Eddie on his journey.

Scorsese has made better films, but this one is near the top. It’s as personal as it is professional. It has style, flash, intensity and depth. The decision to forgo the original Tevis material seems the only possibility, given Gleeson’s failing health, but the story pushes forward the character of Eddie Felson by making him even more human than he was in the original.

This is the movie and performance that Fast Eddie deserves even if it takes until the end for him to get back.