Skip to content
Everest (***) : In the battle of you against the world…
3 Stars 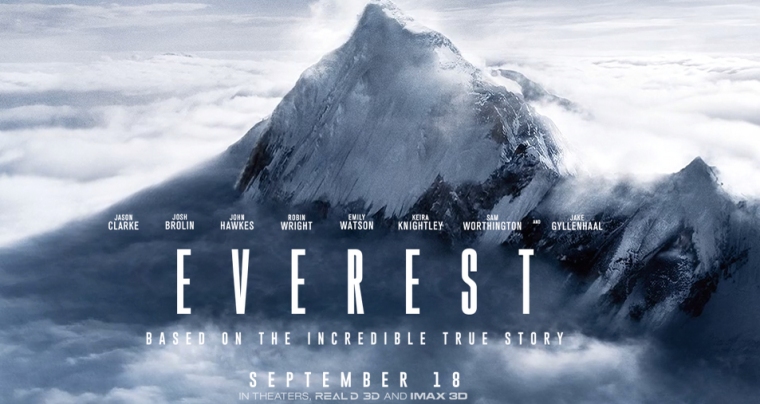 Noted realist Franz Kafka once said: “In man’s struggle against the world, bet on the world.” Everest is the big screen chronicle of the story of a bunch of adventurers who refuse the logic of this statement. Their motivation, because it is there, defies any real logic. Instead it is tantamount to man believing that somehow their will, along with some careful planning, is enough to get them up to the peak of the tallest mountain in the world. Being the first to admit this kind of challenge means nothing for me, I am more the proponent of “slow and easy wins the race.” And it really doesn’t matter if I win the race. It only matters that I am there to help my children grow up.

When covering the real events of the 1996 Mt. Everest climbing disaster in which 8 people lost their lives, it is tough to view the film or the depiction as anything other than as a serial killer film, where the mountain is the cold, faceless killer. Everyone has a chance to survive if they make the right decisions, including not going back for stragglers. The accounts of what happened are numerous, and no one is going to accuse the studio of making the comprehensive version of the film here. In fact, one of the earliest chroniclers Jon Krakauer objected to parts of the story as being fabricated, director Kormákur stated that the reasons they chose to not use the author’s first-person account in the film because it conflicted with the plot that they created. In other words Hollywood has only one path up Mt. Everest. It is well-worn and has many points that everyone has seen before. The real reason they are making the film is for shots like this one:

There is no deep thinking here. No one explains anything more than armchair philosophy as to why someone would leave their family behind (often more than once) to face impossible odds and go shirtless at base camp. Even more distracting for me is the sheer number of stars in the film. I should be contemplating the second attempt of Hawkes’ Doug to get to the top of the mountain, or why Hall (Clarke) could leave his pregnant wife to work as a mountain guide. I am instead wondering why the erstwhile Sol Star has not gotten more significant roles since Winter’s Bone and Martha Marcy May Marlene and is Knightley ever going to be believable as Emily Watson in any film? Don’t even get me started on the Robin Wright / Michael Kelley / House of Cards connection. If one of the characters begins to sing There’s Got to be A Morning After, the disaster would be complete.

The scenery is breathtaking, and looks fantastic on widescreen. Do I believe these actors are on Everest in any capacity other than base camp? No. There are lots of places with snow in the world. Even James Bond sets. When one discovers that 16 Sherpas were killed bringing up equipment for climbers in the 2014 summer season, but that everyone in the Everest film crew survived, the absurdity of it all takes root. There will never be a movie made about those Sherpas shown on big screens of Western Civilization. The deaths of the locals don’t count.