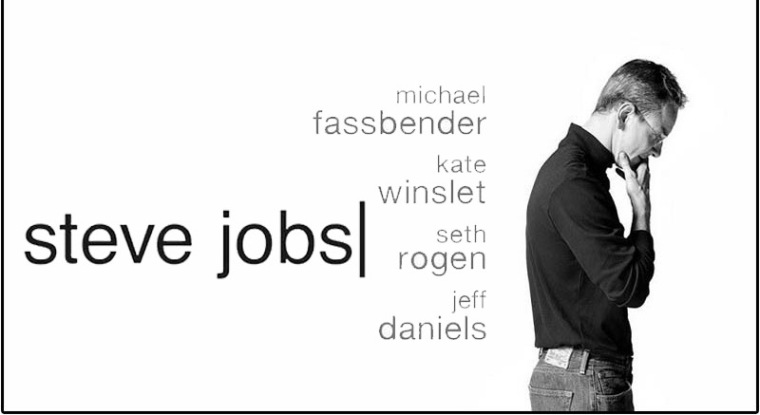 There’s nothing quite as appealing as Oscar bait that actually feels like a real work of art. What we have with Steve Jobs is nothing less than Boyle, Sorkin, Fassbender, Winslet and even Jeff Daniels at their best. The film is like a play in three acts, all taking place in the timespace of three of his product launches. It is not so much a verbatim autobiography, but rather an intricately and carefully planned paraphrase of its subject during three phases of his life. I never held much interest in Steve Jobs the guy, even if he helped to guide the vision of the future of civilization to smaller, more powerful and easy to use communication devices. That his story is communicated in a similar fashion is beautifully appropriate.

Launch one (Macintosh) finds Jobs (Fassbender) at his most confident and misguided. He knows he is about to change the world and he does not want to hear anything that might get in the way of this. His interactions cut a jaded swath through everyone except for his most trusted advisor and Head of Marketing, Joanna Hoffman (Winslet). He is alternatingly harsh and dismissive to most people he comes across. He is not, however, without contemplation, as we find later on. He absorbs most of the information he is given, processes it, and saves what is necessary for later. And in a film like this, you can bet most of it is necessary.

Launch two (NExT) finds him scarred and smarter, for the most part. This is the Jobs that has nothing to sell, but is selling it for his future profit. Some who knew him say he was not angry as he is portrayed here. I can only say it seems a natural progression to have a little vengeance pointed at the company that you started that ultimately booted you out. His relationships are all reassessed as the people who were in his life the first time come back for another look.

By the time Jobs launches the iMac, his fortunes had permanently changed for the better. The third act in any play is a time to see what has been built by the first two acts and Sorkin does not let us down here. Every subplot has a sort of beauty in its completion None are concluded so eloquently as the resolution between Jobs and his now adult daughter Lisa (Haney-Jardine). That the two had the farthest to go makes the journey the delightful center of Steve Jobs, as it turned out to be in his life, too.

Everyone wins in this film. There is not one false note, and definitely no cheap tricks. The film is a beautiful translation that feels true of humanity, not just one person’s life. Fassbender is yet another 2015 performance that deserved the Oscar more than the actor who won it this year. His performance is fluid and graceful where it could have been done even more powerfully as cold and empty. Steve Jobs as conceived by Sorkin and Fassbender is someone I will not forget meeting, even if I never had the desire before the lights went out and the camera rolled.

My goodness, they really could give Winslet an award every year. She personifies heart, strategy and protection. Her character is more a pit boss than anything. She can see the whole road of Jobs’ life while he keeps his eyes on the next turn. She is given her Oscar moment to flip out and give a big speech, but her gift is making it seem more purposeful and less contrived.

Jeff Daniels, playing Jobs former partner / boss / nemesis / friend does another perfect definition of supporting actor. The director and writer work in perfect cohesion, even though I am not sure that they worked together before.  Boyle even went as far as to film each phase in a different film format (16mm, 35mm and digital). It works both as standards for each time, but the decreasing clarity that one experiences as life gets further away. It’s kind of like why I can only see images of my dad’s favorite films in the small bubble screen that used to be our television in the 70’s and 80’s.

The film is as finely tuned a biography as I have ever seen. In bypassing attempts to get time and place and instead going for feel and emotional honesty, they have struck a cord that will resonate henceforth. There will come a time when Sorkin and Boyle move on to the next part of life and we will look back and wonder how vastly we were blessed to have them in our lives.