There is an old ship, that lay dormant for years that is discovered in the midst of the chaotic pace. That ship has a story that is only touched upon for purposes of pushing forward with the action at hand. How and why that ship was there for so long is what I wonder about as the last act of the film takes place. What happened to its survivors? They tell you what they want you to know. It would be more interesting to find out more about their story. 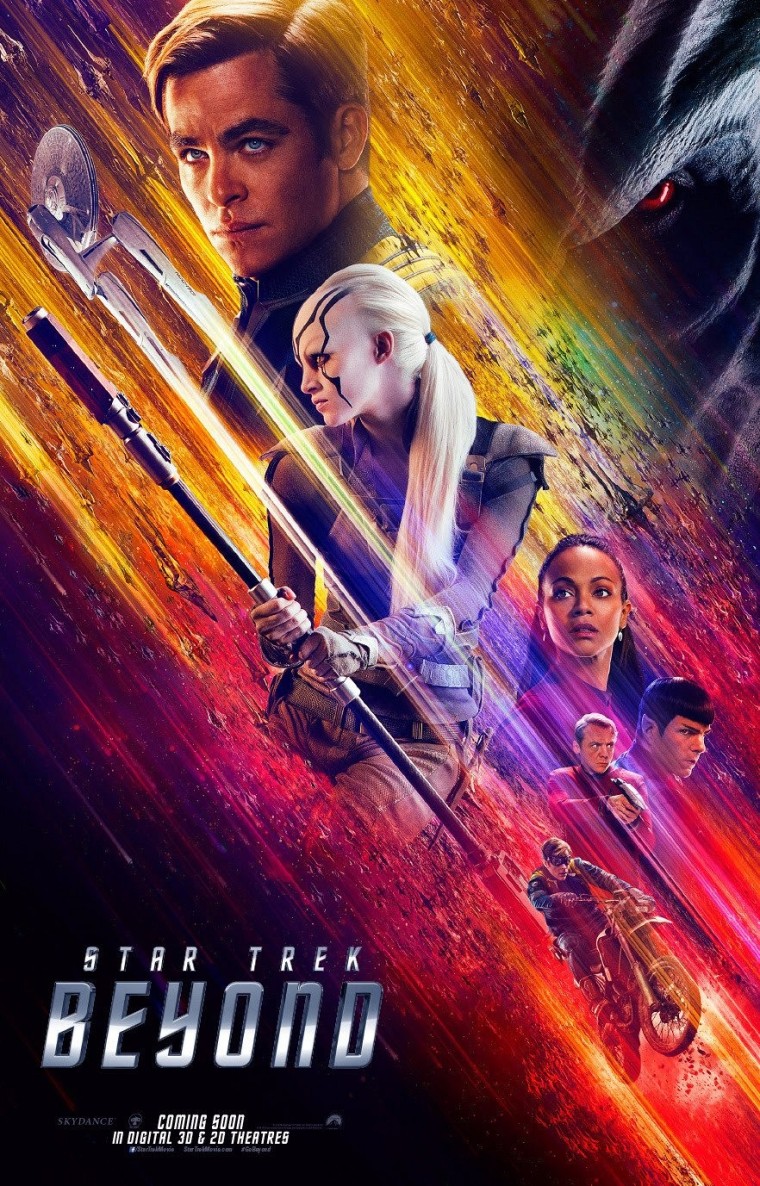 There is a scene it Star Trek First Contact when, for the second film in a row, they are on the verge of destroying the Enterprise.

Crusher: So much for the Enterprise E.
Picard: We barely knew her.
Crusher: You think they’ll build another one?
Picard: Plenty of letters left in the alphabet.

Including all television series, there have now been 6 times in which the Starship Enterprise has been destroyed. Some of these have been undone by time travel, but still, the bell has been rung enough to train Pavlov’s dog by now. Like those mutts, we keep coming back, thinking we’ll get another morsel or two. Those morsels can sustain us through some lean times (Star Trek V and more recently, Into Darkness) and they also have become an easy dramatic ploy that takes the wind out of the sails of what could be better stories (Generations and Star Trek III) if they had tried a little harder.

This time, the Enterprise is sacrificed to do a little of both. The story is a weak one: a nondescript bad guy (Elba in a wasted role) wants revenge. How the story is told is a good, sustaining nugget that reminds us why we go back to the well over and over.

The story starts out with a turn of Kirk the diplomat. His efforts to offer a piece of an ancient indeterminate space weapon fall into a chaotic fight. This is drawn for laughs, but it falls a little flat when they try to mess with visual perspectives.

We see that the ship has fallen into a routine on the 3rd year of its 5 year mission. This routine works for many, but Kirk and Spock are both looking over the fence, metaphorically speaking. The ship docks at the new starbase Yorktown. Seperately, Kirk and Spock seek out other options unaware of each other’s plans.

While here we also see Sulu, his mate and their child. This is a passing glance, but it made a big news splash when announced in the press tour. That Sulu is gay was a bone of contention for some, including the man (Takei) who originally played him in the series. Everyone who knows Takei understands the irony of his position. Pegg defended the decision, but honestly it’s hard to cite the source (Gene Roddenberry) for his opinion. For me, it seemed obvious by Sulu’s sense of fashion in Star Trek III if nothing else. Really though, where else but Star Trek?

An escape pod arrives with a tragic tale being told by its survivor (Wilson). The Enterprise is sent out on a rescue mission. What it sees when it gets there has been shown through perhaps the worst ad-campaign for a good movie in years. Why they show you the destruction of the Enterprise and at the same time play Sabotage in the movie’s first (Super Bowl) ad, I will never understand. They could have shown many other things and the movie would have been much better anticipated and received.

Why and how Krall goes about his quest for vengeance is so inventive, it makes one wonder why he didn’t just do it years and years ago. Then, I suppose, he wouldn’t have been able to meet up with Kirk and company. Krall himself is not all that interesting as a bad guy. He’s kind of a combination of Insurrection‘s Ahdar Ru’afo and Nemesis’ Shinzon. This translates to: not memorable and redundant. He has one agent working for him that is effective, however, in the ability to act as a chameleon.

Faring better this time is the tried and true method of breaking up the team into smaller segments and letting those smaller teams bond and coalesce into examples of forward thinking. This process worked well for many of the best Star Trek films in the past (IV and First Contact in particular) as it allows screen time and genuine moments to occur.

Pegg and Jung flesh out better performances by members of the cast short shrifted by the last film (especially Urban’s McCoy) and Lin keeps the action frenetic while allowing the natural wit of the cast acting out Pegg’s script to shine. My heart hurts seeing Yelchin shine as Chekov. His exuberance is engaging and it is sad to know this is the last time we’ll see him in uniform. Live Long and Prosper, Anton.

For everything but the lack of a compelling and properly motivated malevolent force, we have a good movie. Star Trek is not all of the way back, though. All movies except for Star Trek The Motion Picture and IV: The Voyage Home have relied far too heavily on having bad guys seeking vengeance. If they really want a challenge, they should try doing something more esoteric. It didn’t work with the first picture, but it wasn’t because of the plot. It was instead, the concentration of long, silent space scenes in a failed attempt to capture some sort of Kubrickian wonder.

There is an old ship, that lay dormant for years that is discovered in the midst of the chaotic pace. That ship has a story that is only touched upon for purposes of pushing forward with the action at hand. How and why that ship was there for so long is what I wonder about as the last act of the film takes place. What happened to its survivors?  They tell you what they want you to know. It would be more interesting to find out more about their story.

If you want to go where most Star Trek helmers have gone before, Lin is a great choice. His kinetic energy ramps up Abrams action 10-fold. Everything is a pleasure to look at, and he does not waste a single shot. The space fight in the last act is a pleasure both visually and sonically. It would have been even better if they hadn’t let that first trailer out. Only the start of the motorcycle ride looks out of place.

Star Trek in the movies is not a place of wonder and exploration anymore. It’s a jarring, violently paced existence. Do you ever wonder why Quinto’s Spock is not as curious as he is furious? It would take Paramount studios a tremendous amount of courage to go with a story that explores instead of pillages. This reviewer is ready for that type of film.

Even so, this one will suffice for now.