Add up the positives, subtract the negatives and it’s an easy win for Suicide Squad. This movie, especially for Robbie and Smith’s performances, will be watchable for years. If you want to find stuff to hate about the story and film, you will have no problems doing so. If one is honest, the film is definitely likable, even if it does not approach classic overall. 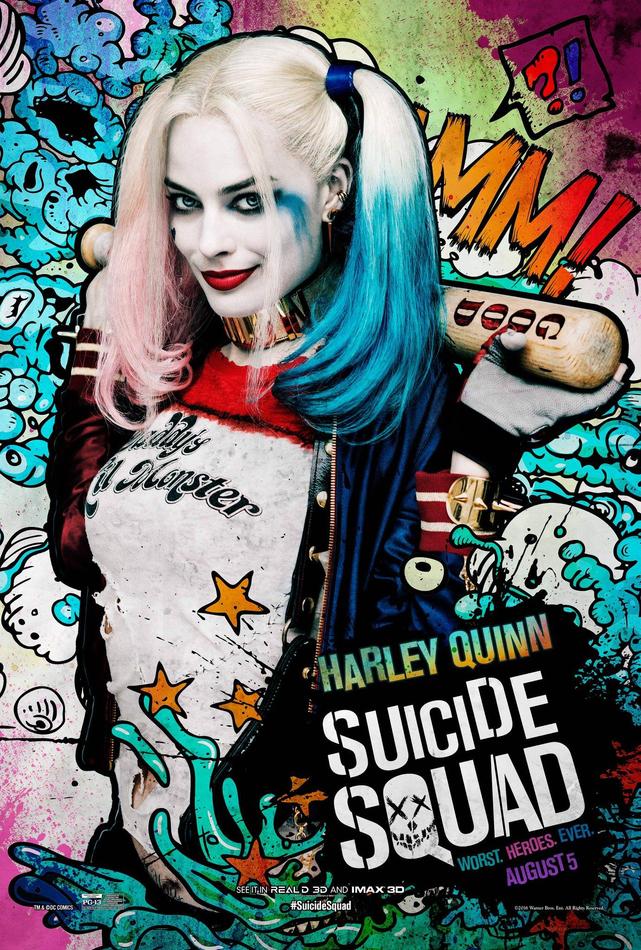 This movie barely got out of the gates before being slaughtered by reviews. Normally I don’t make a practice of mentioning other gasbags, because Lord knows I value my own gasbagging so much more. In the end, it all doesn’t matter too much. This time, I have to say, something dumb is afoot, and the stupidity is not on the screen.

Suicide Squad, for better or worse, is a latter day DC comic book film. The outlook is dark and more than a little hopeless. The characters are disposable, except for a few. The bad guys are an afterthought and a little too CGI heavy. The things that make one uncomfortable about portrayals in the largely sexist and violent, especially regarding The Joker (Leto) will find those same things here.

If you rule this film out because the word is that it is somehow equally miserable as Batman v Superman: Dawn of Justice, you aren’t trying hard enough to enjoy life. In all fairness, those who did not take to that math problem of a film or it’s measurably better Director’s cut, there is a reason to approach cautiously any film in this Universe that they’ve put in Zack Snyder’s hands, as producer or otherwise.

That alone is not reason enough to avoid giving David Ayers a chance. The artist responsible for Training Day, End of Watch and Fury deserves your time. Suicide Squad would have been a worthless pile in many other hands.

The story starts in the wake of events that culminate with Superman’s death. We get a series of introductions as we get to see Federal Intelligence Operative Amanda Waller (Davis) reveal her plans. Some characters get two intross, one’s first meeting is strangely absent until they are on the tarmac. When we see what happens to this sinister agent, it becomes apparent why they did not invest too much time.

Waller’s plan is the formation of a team of “metahumans” who are the baddest of bad criminals that shall be used to accomplish missions for the government. In essence, her rationale is that they need people of extraordinary ability who can take out “the next Superman,” if that one turns out to be bad. If it seems a little thin, well, so did the comic book’s premise. Who’s counting though?

These agents of misfortune are given an offer they cannot refuse in any way, then they are pushed out into their first mission. Will things work out for this crew? When it does, will they get what they are promised? Well, yes to the first question. Of course. It’s the first of a kind of film franchise that they would love to continue. As for the second question, the amount everyone gets is directly proportional to how well this film does and whether refrained from signing a multi-picture deal.

The characters are numerous and differently talented. Some of these talents are useful, some are not as much. Most importantly, are they entertaining? In large part, they are. Robbie absolutely steals the film from her catbird seat. It’s a glorious thing that we get to see Harley Quinn in all of her glory, before she’s is relegated to second banana in a later film tied to The Joker’s insane and often wearying shenanigans. There are zero moments that her mad doctor graces the screen where she is not the character most worthy of our attention.

The only one close to Robbie’s magnetism is Will Smith, who gives his career a necessary jolt with his truly identifiable Deadshot. That he’s given multiple dimensions is not a surprise. He has the chops to pull off the anti-hero that we all can rally behind. He even overcomes a tired subplot of faux-tension with an overly antagonistic Flag (Kinnamen) with charisma beyond the contrivance.

Viola Davis is convincingly charmless and ruthless as Waller. Her acting ability is better than her type of character normally gets or deserves. There is a gravity prevalent that gives the viewer confidence that Waller has the intelligence to survive, so it makes up for the film’s lack of a compelling main villain.

There are drawbacks, to be sure, that keep this film closer to average than classic. First and foremost, Leto’s Joker barely registers. It’s not that this is a bad thing for this reviewer, as the more one heard about the Dallas’ Buyers Club Oscar Winner “method acting” for this role, the more troubled the production appeared. He has a handful of scenes that are pushed to the forefront. The biggest bouts of sexism occur when we look back on his history with Robbie’s Harley Quinn. Even if you know that’s their particular kink, it is not easy to process. There is even a scene with Common that makes absolutely no sense, which – one could suppose – is the point.

This seems to be the summer of villains who don’t do shit. We’ve had some horrible antagonists with Apocalypse,  Krall and now Enchantress (Delevigne). Their job, essentially is to make big plans with the thinnest of motivations. If that seems too much, they also need to wait long enough to for the plot to bring the good guys in the vicinity where, you know, the magic happens. The effects, and especially the dialogue for Delevigne’s Enchantress approaches comically bad. This is deadening to the momentum of each film. It makes one wonder if this is what is what is forcing Marvel’s hand in their re-evaluation of the Avengers Infinity Wars. Two movies of a charmless nemesis Thanos waiting for the inevitable just seems agonizing.

Fortunately this is countered by some excellent work by the less developed characters like El Diablo, Killer Croc and Boomerang (Hernandez, Akinnuoye-Agbaje). All three provide the film with some real entertainment during points in which the story battles inertia. Courtney is a big surprise. It’s rare that he finds a role that allows him to show any amount of charm. Hernandez’ work is especially fulfilling. The marriage of character and story for El Diablo is resonant enough that it gives yet another example of Ayer’s instinct for portraying Hispanic characters with a remarkable depth and clarity. He’s caucasian, just like this reviewer. With only my experiences to draw upon, his Hispanic male characters always resonate for me.

Other things to enjoy are the cameos. I will not go into detail, other than to let you know there are more than one and they do add dimension to the film. Hang on after the credits too past the incredibly apt Twenty-One Pilots song Heathens  and a wonderful collage.

Add up the positives, subtract the negatives and it’s an easy win for Suicide Squad. This movie, especially for Robbie and Smith’s performances, will be watchable for years. If you want to find stuff to hate about the story and film, you will have no problem doing so. If one is honest, the film is definitely likable, even if it does not approach classic overall.