Skip to content
Sing Street (****) You can go anywhere
4 Stars 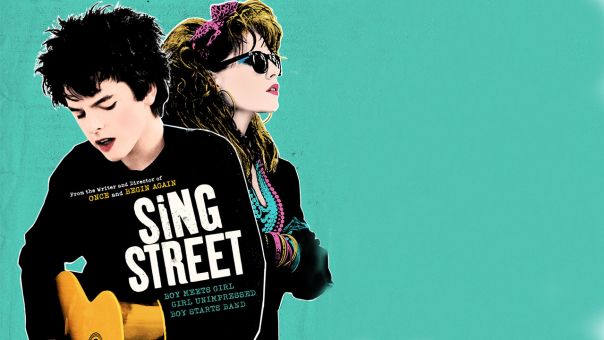 A friend of mine – WeMissE –  who posts his Oscar picks on this site each year turned me onto the video for the song Drive It Like You Stole It Thursday night. By the time I listened to it for the third time, I had bought the movie, even though I had never bothered seeing either of Carney’s first two films. By Saturday night, the first time I watched it, I had no regrets. WeMissE has this as his leading contender so far for film of the year. For me, it’s definitely in the running.

The story begins in 1985 with 15 year old Conor Lalor (Walsh-Peelo), whose family is going through some challenges enough to transfer him from his relatively respected Jesuit school to a free-state school called Synge Street which is a bit tougher. His older brother Brendan (Reynor) – moored to the family even though he graduated – gives Conor a glib reading on his present prospects. Brendan and Conor have a genuine connection, and his older brother’s musing helps Conor soldier through this rather drastic change.

Soon after starting his new school, he notices the beautiful Raphina (Boynton) across the way at a home for orphaned girls. He walks over to her and strikes up a conversation. After discovering that she wants to be a model, he tells her he needs a model for a video that he and his band are making.

Problem is, he’s not a musician. He doesn’t have a band. Fortunately he’s got a friend that helps him in his quest. In a short time he acquires some new mates to be in his band and gets some much needed inspiration from Brendan. He takes the ideas and works with multi-instrumentalist Eamon (McKenna) to create an ever-evolving group of songs that show his development as a band leader and as a person.

What’s remarkable about the film is seeing how Conor and the group’s tastes adjust based on who they are influenced by. This is something with which most people who ever tried imitation of their musical heroes can identify. The sequence of seeing some delightful pop hits of the 80’s transforming into new original music by that Carney, Guy Clark and his other writers is a gift for anyone who enjoyed the era.

What he does with this creative direction is fun to watch as any film I have seen this year. The performances are remarkable, both in acting and in music. The script equal parts funny, poignant and hopeful. If no one in this film had a lick of musical talent, the film would still be fun. That we get to see both feels like we’re getting away with something.

The film loses a bit of steam in the last act, when the romantic portion of the story takes a couple of abrupt turns and ends up in a strangely fake looking boat ride. I would have thought the story could have ended perfectly with more ambiguity, perhaps closer to the dream sequence represented on the aforementioned song. You can see it a little here: