Alvarez and Sayagues have a more relevant film here than just typical horror. There is motivation behind every character and that raises the stakes beyond useless gore. They may have a tough time pulling off a sequel, but the ending leaves that open. An extra star for them if they never do make it. 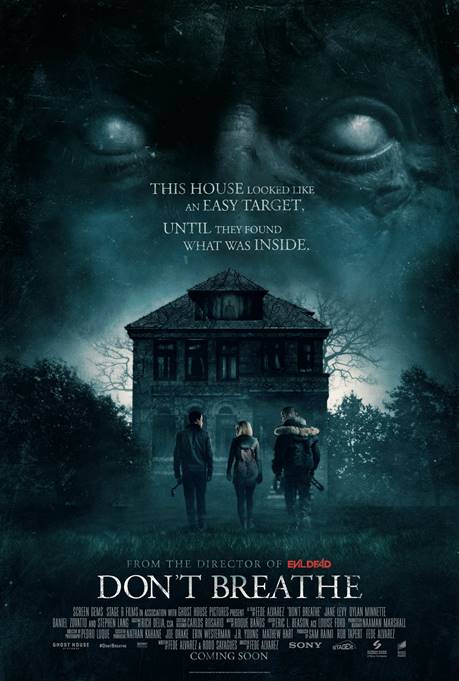 Once in a while a movie comes along where everything clicks. The talent of the writing matches that of the directing and the cast does little to take away from it all.

Jane Levy is Rocky, who along with her idiot boyfriend, Money (Zovatto) and her lovelorn friend Alex (Minnette) are making what counts for a living robbing houses in what is left of the Detroit area. Money gets wind of a possible big cash score and the crew discusses whether to go for it.

Rocky is all for it. She is planning on leaving Detroit for California with her little sister and this could help them make the final push. Alex, who is using his Dad’s security company to help the trio make smaller scores, is against changing the status quo. Money, well, let’s put it this way: Money doesn’t have any plans and he won’t need them.

The owner of the house in question is a blind U.S. Veteran who lost his daughter to a drunk driving accident by a socialite’s daughter. He scored a rather large sum in a cash settlement. He has an attack Rottweiler. He never leaves the house beyond short walks in his abandoned neighborhood. They decide to go for it anyway.

They’re not all idiots though. That would be too easy and it would make the film a rather short experience. The importance of Don’t Breathe is that, outside of Money, there are no thoughtless characters in the story.

The inventive nature of this screenplay goes beyond strategic placement and knowing the geography of the house. There are several points in the first 3/4 film where the unexpected happens. That last 1/4 is still fun, even if one can tell what is going to occur.

Lange is more menacing as a buff blind man than he is at any point in his terrorizing role as Avatar‘s Colonel Quaritch. He’s dangerous and resourceful, but he’s not a perfect killing machine. There are moments that he flails and moments where he can narrow down to one inhale and exhale. He’s not Daredevil. He’s more believable than that.

Levy offers the same visceral pluck that she had in the Alvarez remake of Evil Dead. Her character is sympathetic, but she is not a withering flower. She is playing for keeps once she knows the score.

Alvarez and Sayagues have a more relevant film here than just typical horror. There is motivation behind every character and that raises the stakes beyond useless gore. They may have a tough time pulling off a sequel, but the ending leaves that open. An extra star for them if they never do make it.