As for Scheinert and Kwan, this is the first I have heard of them. Their allegiance to farts is admirable and if there is no other statement they make to the world, this is a worthy first effort. If you see no other film with a friend who likes farting, this is it. 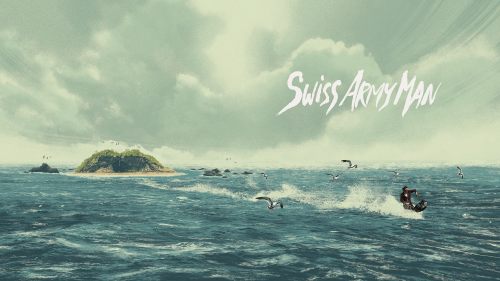 Swiss Army Man is kind of a ridiculous farce. It’s kind of a Fight Club meets Waiting for Godot for the lonely, sad and somewhat perverted. Starting off in a remote location, Hank is about to end it all for the lack of a response to the messages he’s sent out in various types of floating garbage. He sees a corpse in the sand of the desert island beach and responds to it like a beacon, calling him back with glimmer of hope.

Then over the next hour or so, the corpse, who we discover is named Manny, provides Hank with a variety of boosts that helps move him forward and keep him alive. As Hank and Manny work their way back towards civilization, we see that Manny is slowly becoming re-animated. Hank tries to conjure memories for Manny and the memories begin to get more real.

If this appeals to you, I will not ruin it for you by telling you more. What I can say is this the script is intriguing, the direction is adventurous and the acting is sublime. If you think you know what’s happening, you just might. But hang in there, it’s worth it. It’s a story told and a film executed with imagination we don’t see much.

Paul Dano is moving away from actor I would most like to commit a felony against to one of the more reliably excellent. Daniel Radcliffe is even more amazing. This role alone is enough to propel him past the Harry Potter stage of his career. Hopefully this means we won’t see anymore sequels to mediocre magic films or run of the mill horror.

As for Scheinert and Kwan, this is the first I have heard of them. Their allegiance to farts is admirable and if there is no other statement they make to the world, this is a worthy first effort. If you see no other film with a friend who likes farting, this is it.

It’s more than this, of course. They give some good existentialism in the slowest moving road movie of all time. The topics are so wide ranging, innocent and open minded, even the densest among us will find common cause.

The weakest part of the film occurs nearing the last frame when everyone gathers and the script doesn’t know where to go and who is supposed to learn what. They should have ended it about 5 minutes sooner. It’s not a big deal though. Either way this movie will leave you with a smile and a willingness to pass gas in public.